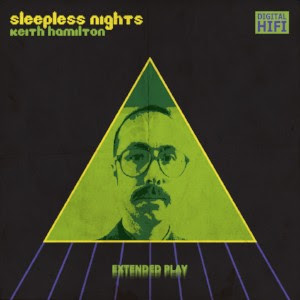 Like a phoenix they will rise from the ashes to rock once again.  After a six year hiatus it sounds as though this is exactly what is taking place with local rockers Sleepless Nights as they embark on a quick jaunt in support of their latest EP, Keith Hamilton.

Available via Acadian Embassy and Forward Music Group on Friday September 15th, Keith Hamilton, picks up directly from where the band left off in 2011.  With layers of punk-rock grit and aggression smeared below an overall brightness, “Crystal Mountains” is the song that the summer of 2017 has been looking for.  If this ear worm of a single is any indication of what we can expect with the newest EP, listeners should be in for one hell of a ride.

In the mid-aughts, Sleepless Nights carved out their reputation as one of the hardest working bands on the East Coast of Canada.  By their final tours in 2009, when the group was put on indefinite hiatus, Sleepless Nights were playing an entire new, unreleased set of songs.  There was a miffed attempt at capturing them in 2011, but no recordings were ever completed.

In June 2016, approaching the 10-year anniversary of their breakout EP, Hang Up, Sleepless Nights reconvened for a weekend of recording in Toronto at Taurus Recording with Thomas D’Arcy (Small Sins/The Ladies and Gentlemen, k-os) to archive four of those songs.  With former member Matt MacDonald (The Superfantastics) joining them in studio, the band recorded Keith Hamilton – an EP that chronicles the now seasoned musicians returning to their roots.

Since the first Sleepless Nights release in 2004, there have been two constants in the band; the steadfast artistic vision and direction of Aaron Wallace, and a gentleman named Keith Hamilton.

A fixture in the Toronto music scene, Hamilton booked the Halifax band’s first ever show outside of the Maritimes.  Through the years, Sleepless Nights toured with several of Hamilton’s acts.  Four in fact: The Postage Stamps, The Diableros, Hamilton Tradition Company, and Beams.  He has been there from the beginning and has tirelessly stuck by the band as a booker, a musician, an actor and a friend.

“He is the unofficial twenty-second member of the band. No question,” adds Josh “Pinky” Pothier, the group’s drummer, jokingly referring to the sheer number of members the band has had over time.

Over 13 years, much has changed about Sleepless Nights.  Musical styles, members, and formations, but never Keith Hamilton.

It seemed apt, then, that on what feels like a return to their musical foundation – dialled up, commanding pop rock – the band should pay homage to the other persistent thread that has followed them through their career.

Plus, who doesn’t love Keith?

The group will embark on a quick Eastern tour in support of the latest release.  Dates are as follows: