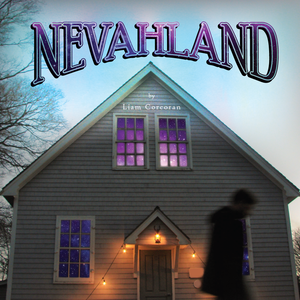 With an already solidified career as a frontman of Two Hours Traffic, Liam Corcoran sets out to take the East Coast by storm with his first full length, solo release.  If his EP from 2015 is any indication, the full length album is sure to be a must hear. As an imminent disaster threatens their small community, a mysterious man claiming to be a priest rolls into their lives.  Under the chaotic circumstances of evacuation, the couples follow the man as he promises to lead them to safety.  Though they remain skeptical, it is clear to the group that they need to go somewhere.  The record traces the harrowing trajectory of these characters as they prepare to leave the only home they’ve ever known, probably forever.

Liam Corcoran’s seasoned skills as a storyteller are on display throughout NEVAHLAND.  Whether in the War on Drugs-esgue sway of “Out Of This World 2,” the sparkling foreshadowing of album opener “Never Ever,” the stripped back simplicity of “Opposite Vultures,” or the Americana-tinged pop of “Tick Tock,” Corcoran’s fictional tale is woven through a sonic backdrop that serves to deepen the story and highlight the ever-changing emotions of its protagonists.

NEVAHLAND is Liam Corcoran’s follow-up to his 2015 solo mini-album, ROM-DROM, and his first full-length since the disbanding of Two Hours Traffic in 2013.  The album is being released on vinyl this fall, and is available for pre-order HERE.