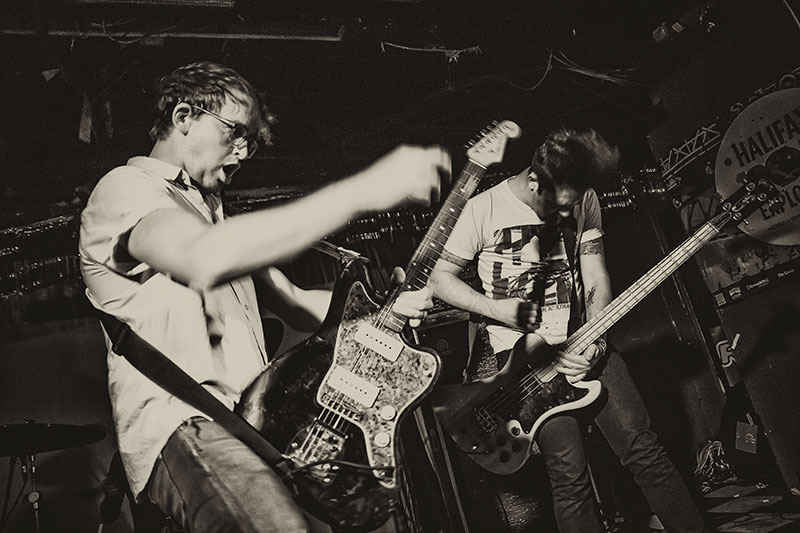 Here’s my bold prediction for the upcoming year: 2017 will be the year of noise rock. Sure, we had some stellar releases in 2016 from White Lung’s Paradise, and Kestrels’ self-titled album, but hear me out, 2017 is gonna kick the shit out of you. Let me analyse this for you, for a sec. First off, we have the previews of bands that are teasing us with new material. Second, we have the bands that are actively twitting, and on Facebook hinting us that new releases on on their way. And third, the basis that every 2 or 3 years, something is bound to be released by a band that is on a hot streak. That’s just basic physics, just look at the bands like Arkells, Mother Mother or even Sloan…(fuck, that band has been around since the early ’90s).

So let’s start off with what we do know, and that is, bands that we know are releasing albums pretty soon…

Vancouver natives, Japandroids, have recently left the studio, and are currently touring in anticipation of their next album, Near To The Wild Heart Of Life, which will be coming out January 27th. Their title track seems to be more traditional hard rock than their last album, Celebration Rock, but wait, it’s just too early to tell. It’s gonna rock though, enough said.

For the next band, we head over across the border to Cleveland, Ohio. Releasing their next album, Life Without Sound, on January 27th as well, Cloud Nothings have recruited guitarist Chris Brown who had been touring with the band earlier last year. The sound of the new track “Modern Act” is pretty upbeat, and a little on the radio-friendly side. But I don’t have a problem with that, since I want these guys to be heard.

Next up, we have a band that have hinted us with some new material; if that pans out as a new album, we’ll have to wait and see…

Thanks to HAFILAX’s Mitch, who mentioned this bit of news to me earlier in December, El Paso, Texas’s At The Drive-In – who haven’t released an album since their break-up in 2000 – have been currently touring for a good chunk of 2016. Relationship of Command was a really hot album back in the day, that spawned tracks like, “One Armed Scissor”, and “Invalid Litter Dept”. At The Drive-In will definitely be a good addition to the music scene this year.

Now for some upcoming album predictions for 2017, these are all Canadian bands by the way…but you knew that.

Just coming off of a tour in the States, the band Metz is heading back in the studio this year, with the intention of releasing an album this year, according to the band’s latest Instagram post. If their latest track that they released last year, “Eraser”, is any indication, we are gonna be blown away this year. 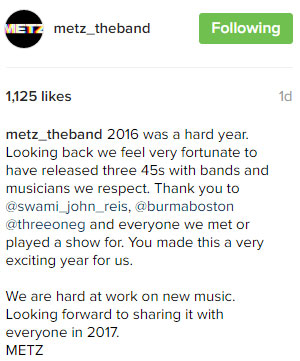 Not too long ago, No Joy released an EP titled Drool Sucker, which would be the first of many EPs that would follow. Currently touring back and forth across the border, the band is looking to release some new material on the 25th of February at a release party in Brooklyn, NY. Here’s their latest post from Facebook… 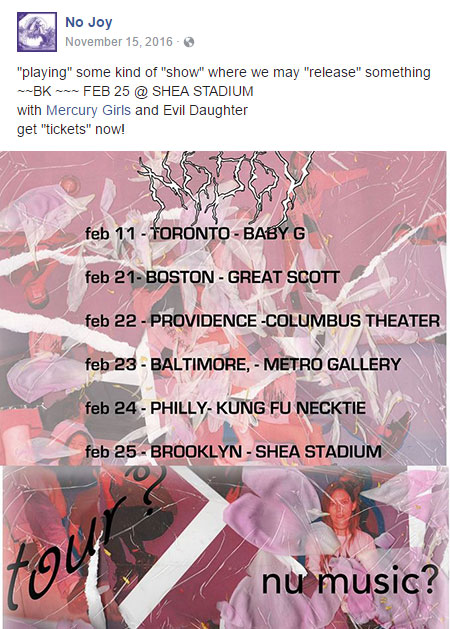 As for some more predictions, we have Alexisonfire who just reunited, and are going on tour in Australia/New Zealand starting this year; PS I Love You, who have been touring Ontario just before the holidays; and Moon King, who have just finished their tour in the States with DIIV. And of course, I’ll leave you with Land Of Talk, another band whose lead singer and guitarist Elizabeth Powell has been active on Facebook for the past year, could we see new material by them too? Let’s hope so…