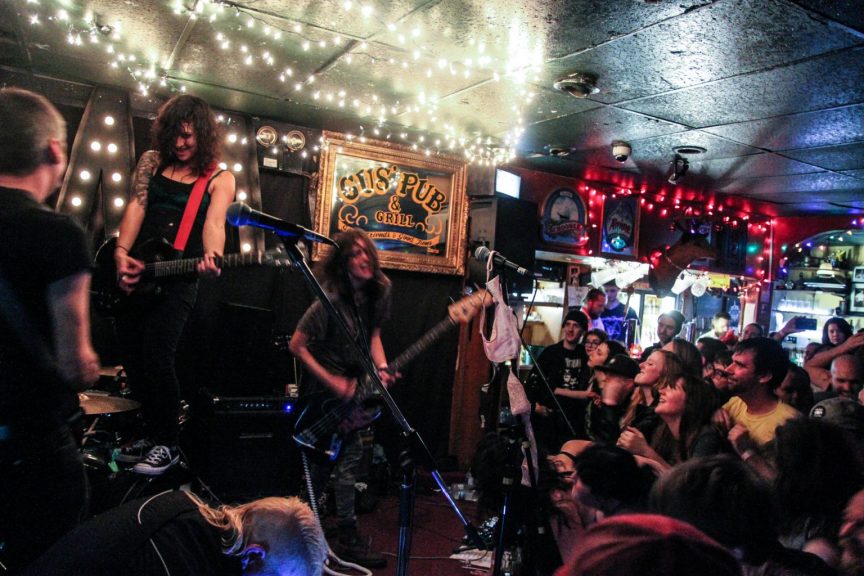 2016 has been a rollercoaster of emotion. From the negatives (loss of Bowie, Prince, Sharon Jones, and the unfortunate gain of Trump) to the positives (me getting married, these albums that I’m going to go through in this piece, and that’s about it), we can all take solace in the fact that 2017 is around the corner. Take a walk with me through my version of this year’s top 10 albums!

If you had asked me in 2015 what I listened to, I probably would have given a generic answer of everything besides country and EDM. Though there’s a lot I don’t listen to, I’m sure, I have crossed one of those off the list. Thanks to Sturgill, I am officially a fan of country music. He has reinvented outlaw country, giving throwback to the days of Willie, Waylon, Merle, and The Man in Black. His latest release “Sailor’s Guide to Earth” is an ode to his newborn son, and stories from his life thus far. Horns blaze throughout the album on tracks like “Welcome to Earth,” “Keep it Between the Lines,” and “Call To Arms,” so far that one might mistake this country gem as a funk/soul album.

TWO COUNTRY ALBUMS?!?! Who is this guy am I right? Well let me tell you…..shut up is who. Margo Price can tell stories with the best of them. Dolly Parton, Tammy Wynette, Patsy Cline…Margo Price. There is no difference. Price’s debut album was recorded at Jack White’s Third Man Records and details her entire life. This Midwestern Belle is one to watch for in the coming years. If her debut album holds this much power, I can’t wait to see what’s in store. (Also check out her previous band Buffalo Clover.)

I can proudly say that I fan girl the shit out of these girls. If you check out my Instagram feed you might think I see them every weekend, and I’m fine with that, because I honestly and truly would. Their debut album High Hopes is an onslaught of punk music. Heavy ass bass lines, wailing guitar solos, screechingly amazing vocals, and ear busting drums make up 10 tracks of a party. From breakups to binges (which can usually travel in the same pack), the girls in LAM utilize a punk aesthetic to capitalize on harmonies and excellent musicianship. “Dead Finger,” “High Hopes,” and “Punk One” gives you a peek into what the chaos of a LAM show has the potential of. If you have the chance, please see these girls live.

Halifax’s Adam Baldwin has come out from under Matt Mays’ wing like a bat out of hell. He has exploded onto the local music scene over the past couple of years to show that he’s a force to be reckoned with. His debut full-length album “No Telling When” is loaded with ’80s throwback rock and roll. Not only does the album rock, but it’s danceable and fun. Baldwin uses his newly statured fame to voice his opinions upon the past federal election on his single “Daylight.” From it you can draw that he’s not as sure as everyone seemed in the change of regime in Ottawa. All in all it’s easy to say that Baldwin has found his voice, and is making use of it in the best way possible.

Breakups are hard, but goddam they make for good albums. Dana Beeler makes good use of heart break on her full-length album “My Mistake.” It’s full of pop/rock gems that will hit the feels like a ton of bricks. Her sultry voice tags along perfectly with her rock ensemble that backs her. Her songs show maturity during tough times, yet a solemn fuck you to those who’ve wronged her in the past. It goes without saying that I’m glad that I’m on her good side (I hope).

These Capers know how to start a kitchen party. They’re a group of fun-loving gents who don’t mind having a beer and a laugh, and their music perfectly represents that. An album so aptly named has never crossed my ears. Full of songs you can’t help but sing along with, and most overlap into songs about love both lost and gained. Their upbeat songs will pack any dance floor, and their slower ones will incite feelings you didn’t know you had.

Jazz-infused southern rock is a sub-genre that I didn’t expect to fall into. Four superbly talented musicians come together to create a sound that can be compared to lots, but at the same time, are in a league of their own. Some songs go from CCR sounds to a punk feel, and others go from soulful slow jams to a jazz breakdown. Though you may not have heard of them, when put on at a party a lot of Shazam hits are soon to follow.

A vast departure from his witty lyrics over heavy 808 beats, Gambino returns with a Funkadelic homage in his latest release. It’s far from his old rap ways, with barely any conventional rapping at all. Gambino sings, shouts, and screams his way through tracks reminiscent of Psychedelic Funk eras of the past. I’m not sure how some fans of his older stuff will react to this, but I’m more than happy to see artists grow and experiment with vast departures from their old self.

Another departure from their old sound is Lady Gaga’s newest release, a more personal and complex album from the new age Madonna. Although the album is sprinkled with what could be club bangers, her lyrics and song writing have gone from writing what THEY want to writing what SHE feels. Some very stripped down and raw emotions are heard throughout, along with introspective looks on how she became who she is now.

Sia – This Is Acting

This album may have gotten the most spins for me this year. Sia’s voice is like none other, in that as much as it’s full bodied and sultry, she hits high notes and almost squeals with passion. Working with some major producers such as Kanye, she put out a hit-tastic album very early in the year. Her act is as much performance art as it is musical. She has club songs that can keep the dance floor filled all night, and can slow it down just enough to have you feel all the feels.

Check out Jeff’s Best of HERE.