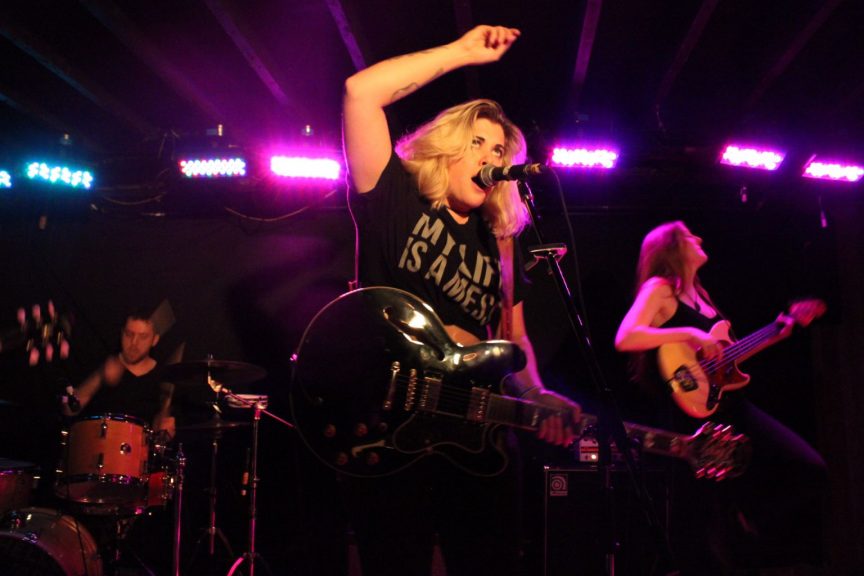 Girls Rule and Boys Drool was the mantra of Friday night. On the rare occurrence of an early show in Halifax, the ladies of the Halifax rock scene were out in full force on the last night of September. Three bands saw the stage at the Seahorse to celebrate the release of Hello Delaware’s newest album “My Mistake.” Surrounded by the three F’s of any local album release (Friends, Family, and Fans), everyone in attendance was ready to start their night with indie-fuelled rock.

First up was the surfy pop-punk trio Cameron. Barb and her sister Tori Cameron, with drummer Brian Talbot, set the bar high early in the night as the crowd started to trickle in. With a feel similar to some of 2010’s Brit punk scene, Cameron are a band who entice you to throw a grin on your face, and bob your head along to the fun. Although nobody was on the dance floor, it was undeniable that the people who showed up early enough were digging what the girls were putting out. From the first strum of the guitar they had me hooked. They went through a short set that saw songs ranging from brand new, never before played live, to songs written pre-pubescently in the girls bedroom in Cape Breton. (Potentially a throwback to Pink Thunder?) They announced that their upcoming album is completed and just about ready for release. Make sure to keep it on your radar, as it’s something to look forward to. 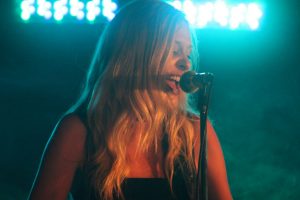 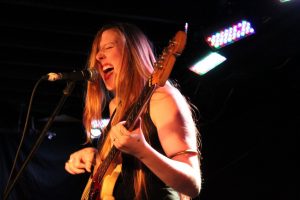 As the liquid courage started to flow, the dance floor began to pick up with Dance Movie. A quartet based out of Halifax, Dance Movie enjoys taking it slow and bringing it to a climax at every chance. Their songs started slow and soft, only to wind up having you curious as to where the wall of sound is coming from, and wondering if it’s the same song that they started with. They pounded through their sandwich set to see the fans feeling the vibes. Powerful voices with noisy guitars and more than enough charisma allowed the band to win over the crowd quickly, and easily. Singer Tara Thorne, after expressing her disdain for parents who force their kids to grow up in the woods, swooned over the fact that not only was she excited that there was one other singer from Lantz, but she got to share the stage on her album release party. By the end of their set, the crowd was on the dance floor, and anticipation was mounted for our beloved Dana and Hello Delaware. 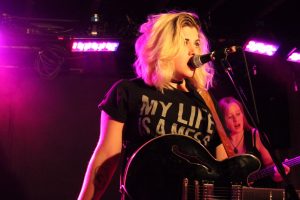 The headliners set upon the stage, and the energy put out by Dance Movie was immediately brought to another level. Before the opening track “Black Cherries” started off the electric set for Hello Delaware, Dana, the bands fearless leader, asked…no no…demanded that the crowd get to the dance floor and have fun. They followed up their energetic first track with the wispy “We Were the Ocean.” “Let’s get lost along the water/and drink a bottle of wine” holds up to Hello Delaware’s views. They fall in and out of love, and don’t mind having a drink along the way. “This is a song about being on tinder for WAY too long”, Dana stated, and she kicked into her song “Holdin’ On” to keep the songs about love and loss on the forefront. Dana’s stage presence was fun and incredibly comfortable. She told stories, interacted with the crowd and, more than anything, sincerely enjoyed herself up there. She dug into her archives to play “Travelling,” a song and makeshift dedication about the old Seahorse. “We used to drink underage, a lot, thanks to the lack of security in the past. Drunk Tuesdays. My mom and dad are here, so I’m going to stop talking and play a song now.” After a long jam with a heavy guitar solo from Aaron Green, they launched into an incredible cover of the Pixies “Gigantic.” Both Dana and Vicky (playing bass on her second set of the night) screamed in beautiful harmony through the under-covered song. For the record, it’s ALWAYS a pleasure to get to hear a Pixies cover. Although the new album contains a cynical look on boys, “It’s not all their fault” Dana said, before ripping into their song “I Never Asked.” “Sometimes, a lot of times, it’s my fault.” The night finished up on a dark note with a jammed-out version of “Where Have You Been”. The crowed swayed and sang along with the Ohhh’s and Woooah’s in the chorus. The downside to it being an early show, was that the crowd wanted more, but alas another show had to go on. 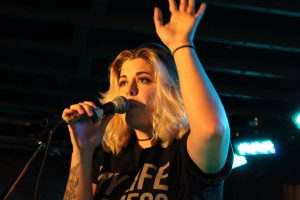 There’ve been talks of the Halifax music scene dwindling, but after last night, I’d beg to differ. The stage was filled with talented musicians, and great songwriters. Everyone was a vet of the stage, and play the city quite often. Do yourself a favour and, whenever you see any of these bands on a bill, get out and support them. There are great original artists in the city. Any one of them may be your new favourite, or may be the next big thing. Help the hipster in you and be the person who gets to say “I remember seeing them on their way up.”