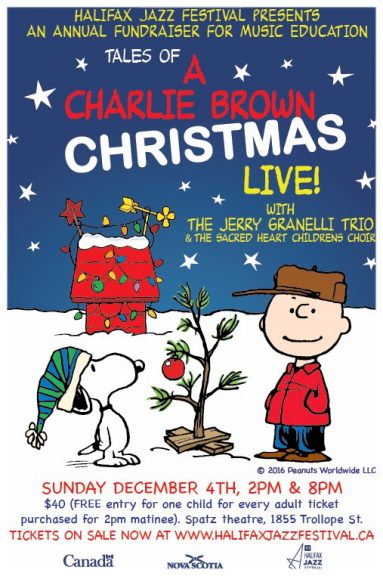 Experience this beloved music with the musician who was a part of its inception! Esteemed jazz percussionist Jerry Granelli was a member of the Vince Guaraldi Trio when the band scored and performed the original recording of A Charlie Brown Christmas more than a half century ago. The soundtrack featured the Guaraldi Trio’s cutting edge contemporary jazz, which was unusual at the time for children’s programming. Since the television special’s debut in 1965, the music has gone on to become an iconic soundtrack for the holiday season.

Granelli is no stranger to the Halifax Jazz Festival audiences, and is one of three parts of the Jerry Granelli Trio, which also includes Calgary’s Simon Fisk on bass, and Vancouver’s Chris Gestrin on piano. For this special performance, the Jerry Granelli Trio is joined by Sacred Heart Elementary School Choir.

The Halifax Jazz Festival extends a warm welcome to families to share in the festivities. During the 2 PM matinee performance, one child (12 and under) may accompany an adult for free. Tickets for both performances are $40 are available on line through the festival’s official provider, etixnow, or through halifaxjazzfestival.ca.