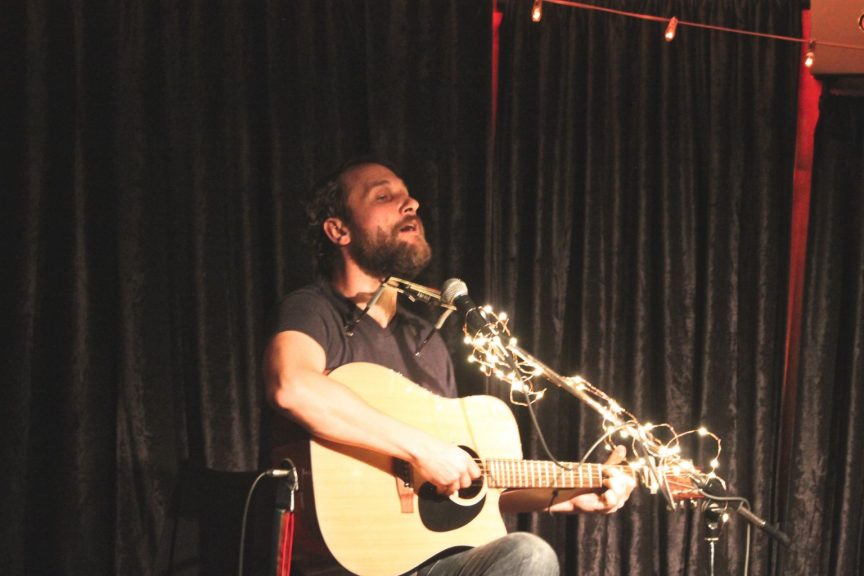 While the party animals from Friday night were licking their wounds on a Saturday afternoon, some had the pleasure of an intimate acoustic show from the Ontario-based singer-songwriter Craig Cardiff. A rare all-ages show took place at the Carleton, that had a mixed crowd featuring a number of parents exposing their kids to a storyteller. Cardiff uses music to delve deep into stories of love, family, loss, and hope.

Before the set started, Cardiff made three promises for the show: There will be sing-alongs, there will be fun, and there will be prizes. The first promise was kept when he started the set with “Boy Inside The Boat.” A couple of practice runs of “No charge/theres no charge for the rain” and he kicked into his beautiful opener. The crowd gladly obliged every request of a sing-along as the set continued into “Lenny Bruce Lee” and the title track off of his latest album “Love is Louder.” Few songs started without a story that accompanied them. He asked the younger members of the crowd, who were no more than 7 or 8 years old, if it was any of their first times in a bar. They happily raised their hands to say it was, and as it was far from mine, the following song ”That Band” told a story that was all too familiar. Sometimes when you play a show, not everyone there cares about the act that’s on stage. With the use of his loop pedal, he made the song sound like too many shows I’ve seen. Using quotes like “Do you know any Ed Sheeran? You know, I play a little bit too, and PLAY SOMETHING GOOD,” Cardiff managed to make it feel like the back row of most places you see shows on a Friday night. He melodically sang over his own noise, and managed to give the feel of a loud, uninterested crowd. After a beautiful version of “Father and Daughter,” which he had written for a friend for their wedding’s Father/Daughter dance, he closed the first set with “Radio #9.” He dedicated the song to Eleanor, an older woman from BC who happened in on one of his shows as opposed to karaoke, only because it was more conveniently located. 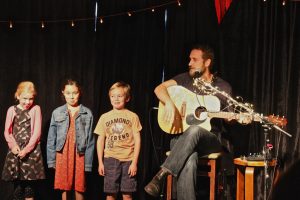 Between sets he spent his time talking to the kids and signing autographs. He kicked his second set off with the morose-sounding “The Very Last Night of The End of The World.” He explained that, although it sounds depressing, it is instead a song of positive ideas. Seeing both sides of a possible outcome, and having the opportunity to make good choices. A beautiful rendition of “Porch Light” followed, a song about living life on the road as a musician and being thrilled when asked if he wanted to use the laundry facility. He then lightened the mood back up with “Ok Cupid” explaining that two friends of his, who are writers and poets, wanted a song written for their anniversary. They gave him their old poems, when their love was new and unbridled, for the body of the song. He asked his two well-spoken, very cultured friends how they met. He expected a glorious story of how their love began only to be told, reluctantly, that it was through online dating, and more accurately the title of the song. The set finished up with “Safe Here,” a heart-warming song that touches on love and trust.

So far two of the original promises were kept. We sang along to about 12 of the 15 songs, and speaking for myself, had a butt load of fun. But so far….no prizes. With it being a small and intimate show, with just Cardiff on the stage, all it took was one patron to ask for another song. With his rubber arm twisted, he played the request of “Memo.” Before starting, he asked the kids to join him on stage. 3 of the 5 kids who were in attendance made their way up. He told them the chorus that they need to remember, and gave them a couple of tips on some dance moves (jazz hands never fail). The kids started out bashfully, but by the end of the song they looked and probably felt like The Supremes. As promised, all the kids on the stage got their prizes of free CDs (to be sold to their parents at an inflated price), and fun was had by all.

I loved that it was an all-ages show that didn’t just have drunk teens running around trying to figure out their hormones. Instead it was an afternoon to allow a younger generation see someone who is a master of their craft. A girl, who was no more than 8, sat behind me and was in her glory. She sang along to 90% of the songs, shared a dance with her dad, and got to appear on stage with, who I can only assume was, one of her favourite artists. Couples danced, fathers and daughters danced, my wife had a cry, we all had a number of laughs, and everyone went home more than satisfied. I can only hope that the younger generation continues to enjoy live music as much as everyone did Saturday.