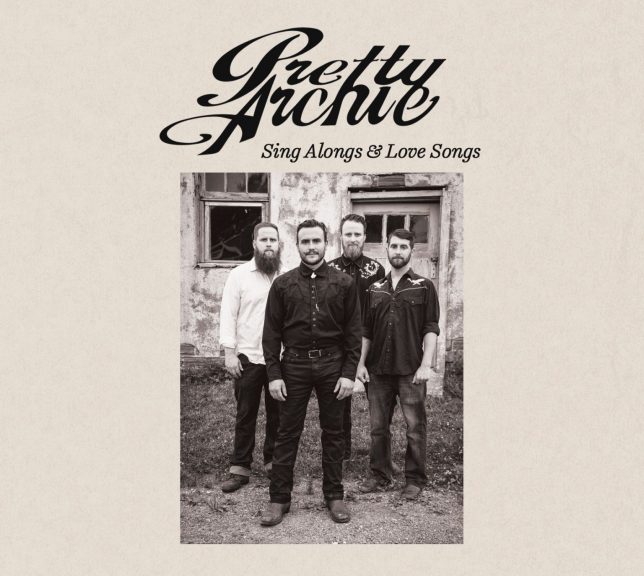 Have you ever wondered what the East Coast sounds like? Pretty Archie’s latest album “Sing Alongs and Love Songs” will guide you to the answer and with it, a more aptly named record has never existed. Their third album will be released Friday, September 23rd and it is chock full of exactly what you’d expect. After one spin of the album you’ll be singing along to the top of your lungs to songs about working to get or losing the love of your life, dancing, drinking, and having a time.

Their opening track (and first single) “Don’t Live Forever” takes the listener down the path of life, hammering home the idea of being able to live the life you want while still being able to take advantage of the opportunities at hand. People spend their lives working hard for their money, so it would only make sense to spend it as they see fit. Colin Gillis, the bearded bass master, stated that the tune came from telling stories within the band about “spending their pay where they probably shouldn’t.”  They keep you on the dance floor with a boozy number, “Keep on Moving.” “Oh tonight/I’m going to get destroyed/I told my boss right where to go/I’m unemployed.” Brian Cathcart, the enigmatic singer, wails his way through some of the more upbeat tracks, only to show his softer side with a track like “Nothing to Trade”, the first love song on the album. They slow it down to tell that special someone that “You ain’t nothing to trade/no nothing compares to ya.” “Oak Island Gold” takes the album title and mashes it into one song. This love song about trying to win someone over might be the catchiest number on the album. “Crying and Howling,” “Have Mercy on Me,” and “Where Were You” are all songs that will keep your toes tapping, and give you ample opportunity to not only hoot, but also holler along with the boys. “Safe With Me,” and “Tell Me You’re Leaving” are the remainder of the love songs on the album. Slow and melodically, they croon their way to the end of the album in heartfelt fashion. The album closes with “She Was Perfect,” a bluesy country-feeling song based around losing the one who meant the most. A somber dedication to the one who got away.

Our parents had artists like The Rankins, Bruce Guthro, Lennie Gallant, and JP Cormier, and as a Cape Bretoner, I can certainly say that I was raised on this music. If you have spent any time in an “East Coast bar”, wherever it may be across the country, or a Nova Scotia wedding reception, you’re bound to go home “full of the devil and full of the rum”. I would bet every penny I had that in 20 years, the songs that you hear in “East Coast pubs” will be from this generation of Cape Breton artists. The boys make sure they are keeping the Cape Breton sound alive and well in their latest release.

Pretty Archie are hard at work touring the country in support of this album and will hopefully be making a stop in a town near you soon! Be sure to keep a lookout on http://www.prettyarchie.com for their album and tour dates.