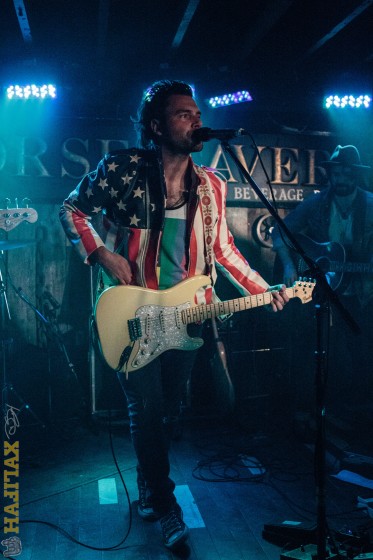 While their smash hit single “Spirits” put the band directly on the radar of the nation’s collective consciousness, unfortunately it has begun to wear thin. On the bright side, the band still has an array of catchy folk-infused pop tunes, and “We Don’t Know” is another fantastic track from the Toronto-based band.  This is most certainly a track that should make our ears perk up again.

Amos Lee is one of those artists that exist on the fringe of the mainstream, always on the verge of breaking through, but never managing to launch themselves off of that perch. That may change with Lee’s latest track “Vaporize”, which is an atmospheric, soulful folk tune that soars gloriously with the singer-songwriter’s velvety tones. This track is very easy on the ears.

When Adam Baldwin released the lead single from No Telling When (Precisely Nineteen Eighty-Five), it took a few listens for it to really catch on. However, after seeing Lil’ Bruce tear through this tune at the Seahorse during his recent album release show, it brought both the song and its message sharply into focus. This is a track that is a fiery, intense plea for the newly minted PM to return our recently tarnished nation back to its former glory.

4. “Cold Blood” – Josiah and the Bonnevilles

A couple of weeks ago Northcote returned to a Halifax stage for the third time in the past 12 months, and this time he brought along two promising up-and-coming acts in Jordan Klassen and Josiah (of Josiah and the Bonnevilles). In the weeks following the show, I have really become enamored with the Los Angeles-based band/singer-songwriter. The band’s latest EP, entitled Cold Blood, is a scant 4-track gem that is loaded with killer low-key folk tunes, which I wish I was as familiar with as I am now when he was performing live.

While on tour in the US, SonReal has been releasing acoustic versions of the tracks on his forthcoming EP The Name. His latest single “Soho” I found was a great example of what this emcee can do without the support of his partner in crime, DJ Rich-A.

6. “No Sleep Till Brooklyn” – Beastie Boys

In honour of the latest addition to the Savory clan, this Beastie Boys classic felt completely apt, as I have bid adieu to sleep for the foreseeable future.

7. “All I Ever Wonder” – St. Paul and the Broken Bones
https://youtu.be/6SmECmN4ywk
I was recently wondering if there was going to be a sophomore release from the Alabama soul collective, then upon browsing a Spotify playlist, tripped over the lead single from the band’s forthcoming release. Man, the voice of Paul Janeway has such an alluring soulful tone, which makes the new single all the more aurally delicious. If you haven’t checked out these guys yet, I’d strongly recommend it.

I was on a coffee run earlier this week, and I fired up this track from a band that was unknown to me and my initial thought was “New Tom Petty?” And as it turns out, everything old is new again.   Mudcrutch actually predates Tom Petty and the Heartbreakers and, having released an album in 2008, the band reunited in 2015 to start work on its followup 2.  “Trailer” is the first single.