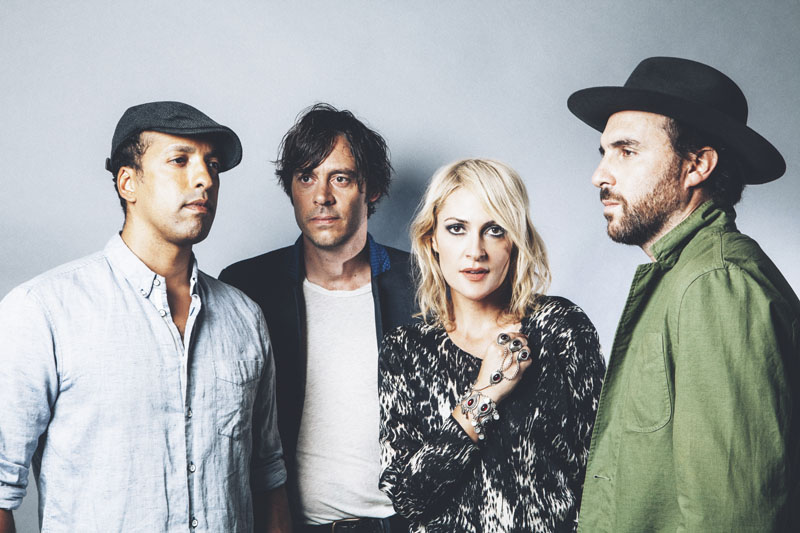 (Halifax, NS) – For the first time in six years, Canadian indie-pop band Metric returns to Halifax to perform in support of their latest release, Pagans in Vegas, at the TD Halifax Jazz Festival on Wednesday, July 13.

During its 15-year career, Metric has produced six albums, collaborated with legends such as Lou Reed, performed with the Rolling Stones, entertained Queen Elizabeth II, and become the first band in history to score its first Top-20 commercial radio hit in the U.S. without the backing of an outside label. Known for its innovation, the band released an interactive app directly to its fans, and set up an esoteric toll-free number for their dedicated listeners to navigate the past and future of their music. Metric is the recipient of numerous awards and distinctions, including winning JUNOs for Album of the Year and Group of the Year. The theme song for Twilight: Eclipse, that the band co-wrote with Howard Shore, garnered nominations for both an Oscar and a Grammy.

The band have their creative process on lock, but nothing about Pagans in Vegas (released last September) came together like any previous Metric record. For starters, it was born during the band’s scheduled year off, when front-woman Emily Haines retreated to Nicaragua and found herself writing on acoustic guitar. Meanwhile back in Toronto, guitarist/producer Jimmy Shaw was obsessed with his S80 synth. When it came time to develop these explorations into an album, they turned to the band’s go-to mixer, Grammy-nominated John O’Mahony, to co-produce alongside Shaw.

Haines, Shaw, bassist Josh Winstead and drummer Joules Scott-Key translated the gratifying experience of discovering an artist you love by packing the album with reverent references to artists who’ve inspired them — from Depeche Mode, New Order, The Cure, and Underworld, all the way back to Kraftwerk. Among the album’s 12 tracks is the irrepressible first single, “The Shade.” The song originated in one of Shaw’s daily synth jams and Haines wrote the lyrics during sessions at Oscilloscope Labs (the studio the Beastie Boys’ Adam “MCA” Yauch built to record the group’s later albums). Despite a few glances in the rearview, Pagans in Vegas stitches together its acoustic and synthetic foundations with a crisp, unique now-ness that captures the quandaries of life in an age where bad news is unavoidable and great art is a life-saver.

Metric released their debut Old World Underground, Where Are You Now? in 2003, followed by Live It Out (2005), Grow Up And Blow Away (2009), Fantasies (2009) and Synthetica(2012). They’ve taken home five JUNO Awards, four CASBYs and received multiple Polaris Music Prize nominations, among many others. They recently wrapped up The Lights On The Horizon Canadian tour with Death Cab for Cutie.

Tickets are $55 in advance (including tax and service fee) and will be available at the etixnow kiosks at the Halifax Forum (2901 Windsor St.) and Music Nova Scotia (2169 Gottingen St.) and online at www.sonicconcerts.com and www.halifaxjazzfestival.ca. 19+ with valid ID.