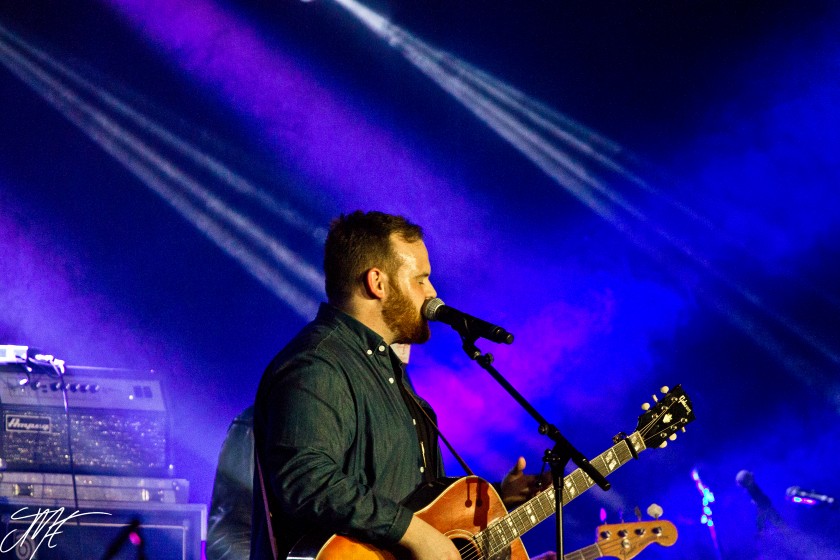 And just like that we have another East Coast Music Week in the books. With no regard to anyone who might oppose it, this five-day festival came, saw and conquered. Whether it was a hip-hop show during the early hours on Friday, or an afternoon acoustic set at the local watering hole, all genres of music were well represented and celebrated for the fest’s duration. So instead of listing each award winner or trying to put together reviews for the shows I took in, I thought it would be fun to hit on some things that I liked (the winners of the festival), some things that I didn’t like (the losers of the festival) and some random thoughts about the past week.

The best kept secret in Cape Breton use to be The Savoy Theatre in Glace Bay; my takeaway after Friday night’s Folk show is that the title now belongs to this gem of a venue. Situated within the walls which once housed a century-old church, the Theatre has all of the technology necessary to compete with the young, up-and-coming venues; meanwhile it still maintains the vintage feel one would expect from a building of this age. With the capacity coming in around 450, the venue is also able to preserve an intimate feeling, allowing for great interaction between artist and patron.

After cleaning up during the ECMAs, this seven-piece Newfoundland act should be a household name. Walking away with 4 awards, Tim Baker and co’s latest release Second Sight is deserving of every accolade that it earns. Filled with intricate musical arrangements, soaring vocals and a commitment to story, Second Sight could very well be the group’s most well-rounded work to date. It looks like the East Coast has finally realized the greatness here, let’s hope the rest of the world follows suit.

After spending four days in the middle of the musical madness it’s easy to declare that this side of the country is absolutely LOADED with talent.  At no point did I walk away from a show with negative thoughts (and this isn’t me simply trying to spread good cheer or karma). Even at its most generic-sounding moments the East Coast scene is second to none. No matter what your appetite, it is incredibly easy to find a little something for everyone.

Let me first declare that country music has never been my scene.  It’s a genre that I’ve never been attached to, attracted to or enthralled with by any means. I had a brief Garth stint back during the late 90s but fell off as soon as the Chris Gaines persona came about. Fast forward to 2016 and two of the major standouts during the 2016 East Coast Music Week were Jordan Musycsyn and Dave Sampson.  In Musycsyn, we have a throwback feel that pays tribute to the likes of Willie Nelson, Merle Haggard and John Prine, while Sampson’s craft is more reflective of the rockin’-country sound you’d hear today. Both of these young artists are officially classified as must-see acts. Bravo country music, you’ve finally got to me.

How can we not celebrate a list of artists that include the likes of Jenn Grant, Amelia Curran, Christina Martin, Chelsea Amber, Whitney Rose, Alana Yorke, Emilee Sorrey, Brianna Gosse, Mara Pellerin, Kinley Dowling, Kat McLevey, Mo Kenney, Catherine Allan, Natalie McMaster, Michelle Skelding, Jillian Comeau, Kim Carson, KT Lamond,  and so many more.  Congrats to all of those fantastic musicians for being such a breath of fresh air within the industry.

I applaud anyone and everyone who has a hand in helping to organize any type of festival, no matter what the size. The amount of time and planning that would go into an event of this magnitude cannot be balked at. However, there also has to be an expectation that something may not work. Maybe a wrong venue is used, or maybe a mixture of artists in a showcase don’t quite mesh. In the case of the 2016 East Coast Music Week it was the Red Carpet Gala which fit this narrative. From poor organization to horrendous backdrops, or lack thereof, the red carpet ceremony was a massive waste of time. If you’re going to allow all different members of the media access to the artists then all opportunities should be somewhat equal. If not, keep the media numbers low and allow those members the opportunity to take full advantage to interact with the artists on a more relaxed and personal level.

From my experience over the four nights I would say that crowd sizes were decent enough. Some shows had more than others, but the overall feeling that I had was overwhelmingly one of positivity. The show that I had expected to be close to capacity (but appeared to have fallen quite short), was the rock showcase on Saturday night. The idea of placing this showcase directly behind the sold-out Big Ticket Show (The Fortunate Ones and Hey Rosetta! performed) made perfect sense, as you would think that the crowd would stick around for some of the more seasoned East Coast rock acts. However this was not the case, with more than half of the patrons from the previous show choosing to leave (hopefully to see one of the other showcases taking place around town).

I really can’t hammer home how great of a performance this was during the Friday night of the festival. With his full band in tow, Dave Sampson and co blew through a 40-minute set with the greatest of ease. Tight and precise like a well oiled machine, these Capers could flow from country rock to ballad with a maturity most artists would only hope for. Not only is Dave Sampson a fantastic singer/songwriter, but his live performance during both shows (as a band and as a solo artist) was second to none.  The level of comfort that he and his band have on stage oozes with every movement made.

Artist(s) Who Needs to Move – The Motorleague

Let’s make it clear that I do not want any East Coast artists to have to move away to another province in order to succeed, but sometimes it’s the best move for band or solo act to make. Those musicians looking to forge a name for themselves within the music industry often find themselves having to relocate to the bigger centralized cities of Toronto or Montreal in order to capitalize on bigger opportunities. This award unquestionably goes to The Motorleague, and while I’m not one to pretend that I know why The Motorleague are still based out of Moncton, and nor do I have any idea as to what they may have planned for the future (and that’s not a shot at either the band or the city, but if they were in Halifax I’d be saying the exact same thing).  All I know is that this four-piece rock band were the tightest, most energetic group I saw all weekend and their performance blew me away. It makes no sense that they’ve yet to break out. So. God. Damn. Good!

No matter what the time or the day Governor’s Pub officially/unofficially became the place to be. The intimate space played host to a slew of acoustic sets and also acted as the home for ECMA radio. At times during the weekend the line-up found itself straight out the front door. In the sleepy little city of Sydney, a five-day uptick would be welcomed by all.

Coolest Cameo – The pipe organ in the Highland Arts Theatre

Prior to Ben Caplan’s show on Friday evening, there was word that those in attendance would lay witness to a special surprise. Just when it appeared that the night would end surprise-less, Caplan jumped to the pipe organ and belted out one final hurrah. It was the perfect marriage between artist and instrument. The sound that bellowed from the pipes above became a perfect background for Caplan’s exuberant sound.

A Round of Applause – The Shuttle Service

Most venues were close enough that a quick five-minute walk could get you from point A to B, however there were times when walking was not an option. Thankfully the ECMA had put together a well-run and free shuttle service that would provide transportation from one venue to another. With a festival of this size and so many shows happening at different times/venues, it was nice to see that the people could spend their taxi money on shows they may not have originally planned on attending.

– Like A Motorcycle were fast, furious and downright dirty.  Such a fun set.

– Ben Caplan’s stage energy was second only to the rest of his troupe.  Such an energetic set from each member of that band.  A perfect marriage you might say.

– The set up for the shows that took place at the Joan Harriss Cruise Pavillion (better known as the Big Fiddle) was well done. A good amount of seating/tables, but not overpowering to the point where those who wanted to rock felt suffocated.

– I have no idea what Cy were saying but they said it well (if you’re not going to check out the link, they sing in French).

– Cape Breton pizza is still better than any other pizza I’ve had off island. This is not me being a homer. I proclaim nothing but the truth and you all know I’m right!

– Quiet Parade was the band that had the name which best described their sound (it’s weird to think about that and you won’t understand until you see them live……I promise, it will make sense).  Oh ya….they were pretty awesome as well!

– If you’re looking for a kitchen party, Sydney was as good a place to find one as any.

– I missed out on Ouroboros and am completely bummed.

– For some odd reason there never appeared to be any paint on the roads in Sydney. It can be very confusing driving in the dark, while it’s raining, on a four-lane highway with no lines.

– If you were to close your eyes you could very easily mistake Dylan Menzie for Joel Plaskett.

– The Cape Breton kitchen party on May 6th is going to be one heck of a night thanks to the fantastic musical lineup (the great craft beer doesn’t hurt either).  Jordan Musycsyn, Keith Mullins and Dave Sampson are going to destroy that stage!

– Bruce Guthro put together a last minute pop-up show (not in conjunction with the festival), and not only did it sell out, but it had a wait list a few hundred deep. Brilliant idea.

– If this was the last time the ECMAs end up in Sydney (purely speculation….I have no info or reason to think this, other than the thoughts in my own head…..you know with the super massive declining population and all), they put on one hell of a party. 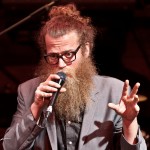 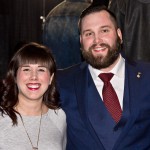 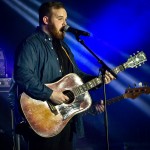 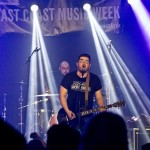 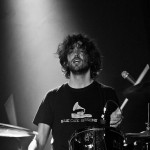 Bruce Gillis of The Town Heroes 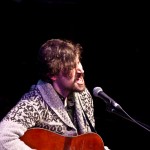 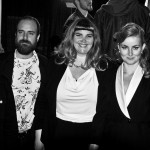 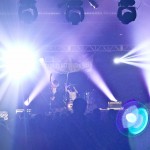 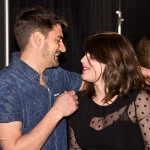 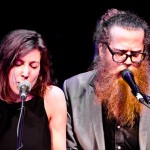 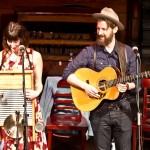 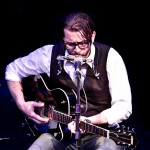 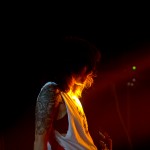 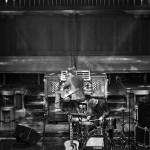 Ben Caplan on the Pipe Organ