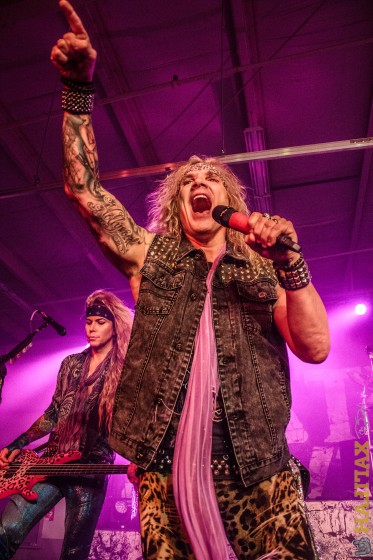 The spirit of the Sunset Strip was alive and well this past Thursday when the spandex clad, neon drenched, post-hair metal icons Steel Panther hit the stage at the Forum MPC to kick off their Cross-Canada tour. (That’s right, as it should, the tour started out in Halifax instead of Montreal). It was a show that was only announced a couple of weeks ago, but the Forum MPC was jam packed with a largely male audience, while the ladies that were in attendance appeared to be ready for a night of hedonistic 80s era hair-metal. However, before the heavily anticipated Panther, Dartmouth heavy-metal outfit Black Moor hit the stage. Awash in fiery oranges and reds, Black Moor tore into a raucous and vicious set loaded with blistering guitar riffs, a thick deafening concussive barrage of drums and a killer metal howl on the mic. It was the perfect way to fire up the crowd. The Halifax-area audiology community should be paying these lads a commission, as this was a potently loud set. It was then time for a quick change-over and then the stage was drenched in neon light, perfect for a Steel Panther. 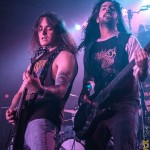 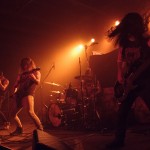 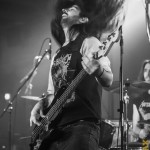 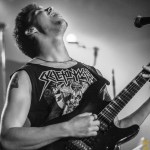 For the uninitiated, Steel Panther are an act whose tongues are firmly planted in your girlfriend’s cheek (well, at least that’s what the band hopes to accomplish). Much like the acts the band is emulating, there is no shortage of backstage passes being handed out for the ladies to get an intimate tour of the band’s dressing room. I hate to think that there’s anyone in attendance who isn’t in on the joke; much like the beloved Spinal Tap, Steel Panther revels in the raunchy banter shared both with the audience, and amongst themselves. The four members of the Los Angeles glam-metal outfit appear to be having a blast on stage, from the band’s leader and recruiter Satchel (Russ Parrish), lead singer and front-man Michael Starr (Ralph Saenz), drummer Stix Zadinia (Darren Leader) and last but not least bassist Lexxi Foxx (Travis Haley) who spent a fair amount of time admiring his hair (and actually was proud that the pink leopard mirror matched the pattern on his bass). 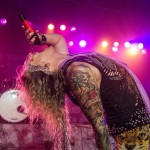 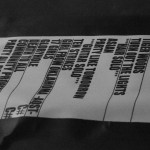 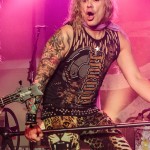 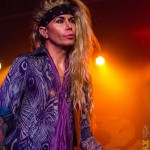 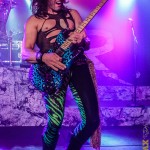 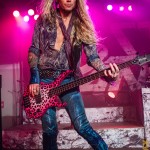 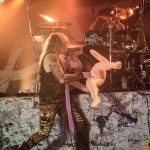 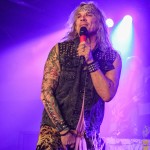 This was a show that could be compared to pro-wrestling, as you have a scripted program with a roster of talented athletes who have spent years defending their product from the critics, who are more than ready to slap on the clichéd argument that pro-wrestling is “fake”. A Steel Panther show will have a legion of people willing to overlook the joke, and miss the performance and satirical nature that are blatantly overt and in your face. People will criticize the material as being misogynistic and sexist, which at face value it could be perceived as; however, we’ve all heard the tales and the vast majority of people know who Tommy Lee or Gene Simmons are, and are familiar with the stories that have been told about their time on the road. While it’s easy to get caught up in the noise preceding the Steel Panther experience, it should be said that these four guys wield their instruments with deft precision. They are a tightly synchronized unit who are masters of eighties-era hair and glam metal. They shred with intensity and have a blast doing so. With songs such as “Just Like Tiger Woods”, “17 Girls in a Row” (performed while the band welcomed a harem of Halifax ladies to dance on stage), and “Party Like Tomorrow is the End of the World”, this wasn’t a set loaded with Shakespearean text, but it didn’t need to be. This was a set of overt, graphic and vapidly fun tunes which had the crowd on board from the opening song to the closing note. While this was Steel Panther’s first visit to the Canadian East Coast, I have a feeling it won’t be their last. 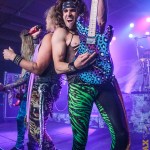 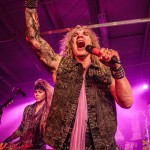 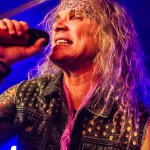 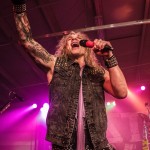 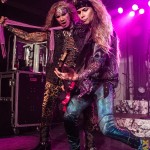 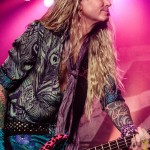 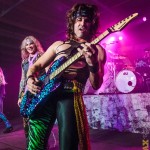 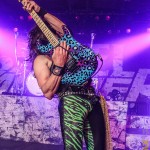