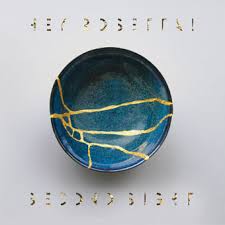 Hey Rosetta’s performance on Friday night was one which not only put a stamp on what has been a successful 10 year run but also one of their more successful tours to date.  Lined with backdrops of gold curtains, a beautifully laid out in-house lighting system and countless lightbulbs spread across the entirety of the stage, the Rebecca Cohn was looking as though a perfect marriage between venue and artist was finally made.

So then why did I come away from this celebration feeling somewhat underwhelmed?

I’ve spent almost as much time following Hey Rosetta! as they’ve been a band.  To watch the evolution of this group has been nothing short of stunning.  Lead man Tim Baker has grown from a quiet, reserved, peaceful soul who often appeared to struggle with the fame and adoration that came with being the face of a rock group, into an intriguing, energetic lead who has accepted his place and role within the Canadian musical landscape.  As Baker has grown on stage, so has the rest of this Newfoundland act. With more of an assurance and confidence on stage, this group of 7 has become known for their ability to energize and connect with audiences, no matter what the size or demographic. Whether it was taking the stage as one of the artists performing during the East Coast Music Awards, or playing for 200 people on a hot summer evening in August at the Hubbards Shore Club, Hey Rosetta! have always been the one band that was always present in time and place.  Unfortunately, the second night of their Rebecca Cohn residency put a small halt on that momentum.

Kicking off the evening were British Columbian natives Yukon Blonde, who were in support of their latest release On Blonde.This five piece came across as more of an Americana rock act than the synth-rock sound you’d find on their 2015 album. Heading into the show I wasn’t really sure how the indie-dance sound heard on On Blonde would translate within the walls of the Cohn.  My initial thoughts were that this group would be much more suited for a gig at The Marquee or Seahorse, but needless to say I was happily impressed with the more classic rock sound (think something along the lines of early Petty) that was coming through the speakers.

Lead vocalist Jeff Innes (who was celebrating his birthday) and co had what should have been the pleasure of warming up the near-capacity crowd.  With instruments in hand, Yukon Blonde thrust themselves onto the crowd straight away and didn’t end up slowing things down until they were five songs deep. The oddity of this wasn’t the music, or the band, instead it was the crowd.  If a deaf person were to walk into that auditorium during those first five songs, he/she would have to assume that the band on stage were performing some sort of spoken word art.  The venue felt lifeless, it was as if there was a vacuum overhead sucking the energy directly out of the room.  That combined with the fact that the ushers were asking those few people who were up dancing, to sit back down, made for a very odd show.  Musically, I commend Yukon Blonde for forging ahead through the dullness of the crowd to try and put on a show, but when the final chord rung out it simply didn’t matter.

Hey Rosetta! were next to hit the stage and were greeted to a thunderous ovation from the crowd.  I had thought that maybe it didn’t matter who the opening act was and that this crowd were only going to get amp’d up for the headliners.  Maybe that feeling of fogginess was finally lifting and the air would be crisp and clear for the remainder of the show.  Maybe neither of these mattered but Hey Rosetta! would still be able to dig deep and lift this crowd from the grave.  Needless to say, I was wrong.

Still promoting their latest release Second Sight, the first two thirds of the set were filled with sprawling fields of sound and emotion. The beauty of having a band which consists of seven musicians is that the recreation of an expansive album, such as Second Sight, is a very achievable task.  Songs “Soft Offering (for the oft suffering)”, “Gold Teeth” and “Harriet” tap into the inner workings of Tim Baker’s pop child while “Promise” and “What Arrows” played on the larger musical themes which would normally take those in attendance down a path of anticipation and musical ecstasy.  I say normally only because none of this seemed to happen on Friday night’s performance.

Let me be the first to say that I’ve proclaimed Hey Rosetta! is arguably one of the better bands Canada has produced in the past 10 years. The songs are intelligently written, perfectly laid out and have an appeal that connects with both young and old listeners alike.  Even at their poppiest, you would not consider them a pop band nor at their most artful would you consider them some sort of new-age art band.  What Tim Baker and co have been able to do is somehow catch lightning in a bottle.  Their ability to mesh multiple genres of music together to help bring Baker’s thoughts to the forefront is second to none.  There is no other act that I’ve seen who is better able to take an idea(s) and mold it into a more pure representation of what was taking place within someone’s mind.  Because of this, Hey Rosetta! have become a band not to be missed. They are as creative and unique as any other act currently out there, as they have learned that not everyone is created equally, which in turn has helped them to grow and develop new and unique relationships every time they find themselves on stage.

Maybe it was the fact that this show was the last night of their lengthy tour; maybe the crowd in attendance was simply distant from what was happening on stage; maybe for the first time, Hey Rosetta! just came up a little short and really needed the lifeless crowd to help push them along. No matter what the reason, there was no question that the energy level within the walls of the Rebecca Cohn on Friday evening was far from explosive, which helped in creating a less than memorable show.  When you’re a band that has achieved a certain standard it can be tough when that standard is not met.  By no means will this show turn me off from the next Hey Rosetta! show in Halifax, it’s just a shame that this one fell flat.