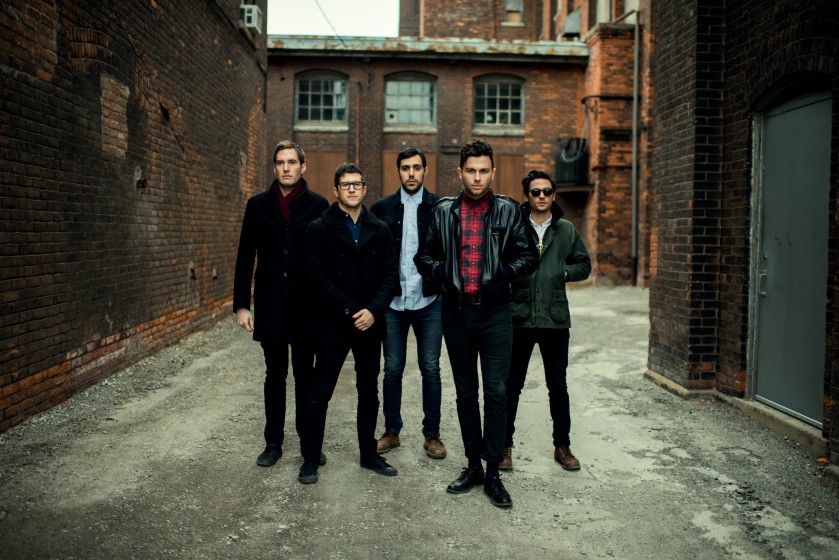 (Halifax, NS) – Four-time JUNO Award-winning rock band Arkells have achieved their first Gold-selling album with High Noon and will return to Halifax to perform at the Halifax Forum Multi-Purpose Centre on Saturday, Jan. 23

Upon its premiere, High Noon hit #1 on the Canadian iTunes chart and debuted at #3 on the overall Canadian Neilsen Soundscan chart, and #2 on the Digital Albums chart. High Noon is the band’s third studio album and features the #1 single at Alternative radio, “Leather Jacket”, as well as the first single off the album “Come To Light”, and the band’s latest single “11:11”.

Arkells (Max Kerman, Mike DeAngelis, Anthony Carone, Nick Dika, Tim Oxford) formed nine years ago and have since become one of Canada’s most successful rock bands. At the 2015 JUNO Awards in Hamilton, Ontario, Arkells won Rock Album of the Year for High Noon and Group of the Year and did a unique performance of “Come to the Light” accompanied by Boris Brott and the National Academy Orchestra of Canada. Jackson Square, the band’s first full length LP was released in 2008 to critical and commercial acclaim, garnering them a JUNO Award for New Group of The Year in 2010. Arkells’ sophomore album, Michigan Left, brought the band to the forefront again in 2011, where they put on an electric performance at the Grey Cup in Vancouver. Shortly after, Arkells were named Best Live Act by CBC Radio 3 and, in 2012 they won the JUNO Award for Group of the Year. Arkells have toured with acts such as Metric, The Tragically Hip, Tokyo Police Club, British Sea Power, Anti-Flag and The Black Crowes.

Tickets are $29.99 in advance and $34.99 day of show (including tax and service fee) and will be available exclusively online at www.sonicconcerts.com. Additional fees may apply.
PLEASE NOTE: This show is restricted to ages 19+ with valid ID. All tickets are general admission, standing room only. Doors open at 7 p.m.

$1 from ever ticket goes directly to Partners in Health Canada as part of the Plus One program. www.pihcanada.org

Plus One connects performing artists, causes, and audiences.

It’s simple. Artists partner with Plus One to add $1 to each of their concert tickets to go to a recipient organization of their choice. Artists and Plus One then create ways to educate and engage the artist’s audience about the cause that lets fans know the impact they are making together. As the dollars add up, we use our collective voice to bring attention to organizations addressing some of the world’s biggest challenges.

Plus One grew out of the band Arcade Fire, who were looking for a way to support Haiti and realized the power that lay with the most passionate and committed people they knew: their audience. By including and committing to a $1 donation from every concert ticket sold, together with education and creative outreach, the band created a new community of support for Haiti. From this success, Plus One was formed to galvanize the music industry and bring together artists, thousands of volunteers, and millions of concert-goers.