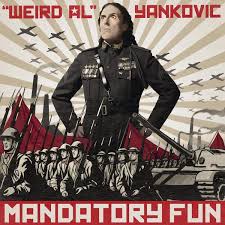 The moment I set foot onto that 3rd floor of Casino Nova Scotia, I knew this night would be unlike any that preceded it.  To my left you had Batman and Robin, to my right was a doppelgänger of Mr. Yankovic (the Headliner of the night), and throughout the crowd was a myriad of Hawaiian shirts, fake moustaches and the obligatory tinfoil hats.  It quickly became evident that tonight’s event would be much more than just a concert; this, ladies and gentlemen, would unequivocally be an experience unlike any other.

From the moment I took my seat, I was immediately greeted by a friendly, albeit rabid Yankovic disciple, who asked if I would sport a tin foil toque during the later half of “Foil” (Al’s take on the Lorde mega-hit “Royals”).  Upon agreeing to wear the hat, said Weird Al devotee dug into a reusable grocery bag and excitedly produced four foil hats for my troupe and I; these hats included instructions (in the event I happened to forget when I needed to adorn my noggin with the foil cap).  With us on board, he moved on to the next group of folks who had just settled into their seats. I suppose that if you can arrange a flashmob to propose to your future wife, who not get engaged at a Weird Al performance.

The evening kicked off with “Tacky” (Al’s take on Pharrell’s hit “Happy”), and Yankovic began the evening’s adventure roaming through the hallways and back offices of the Schooner Room before entering via a side door.  Twisting and contorting the whole way as he approached the stage, the energy emanating from the Weird One’s presence was felt instantly and it swept throughout the entire room.

Looking twenty years younger than he actually is, and acting like a musician who finally broke through and has recently had his first real taste of success, Yankovic spent the entire evening swapping costumes, to ensure his look was in sync with the setlist.  Whether he was dressed as a purple octopus whilst spinning his own version of Lady Gaga’s hit “Born This Way” with “Perform This Way” or sporting a pinstriped suit for his take on Robin Thickes “Blurred Lines” with the witty and educational “Word Crimes“, the Weird One proved time and time again that he remains a relevant force in modern day pop culture.

In addition to the stage, there were 3 massive screens which would provide the entertainment when a costume swap was required.  With the efficiency of a NASCAR pit crew, Al needed only a handful of minutes to change.  Interspersed throughout the evening, the screens displayed a special mix of mash-up interviews (see the Eminem or Celine Dion clips here) among some of the notable Weird Al moments which have transpired over the years.  As opposed to a show supporting an artist’s latest release, Al’s The Mandatory World Tour played more along the lines of a show celebrating Yankovic’s rise from his humble beginnings in the late 70s to the household name he has become.

Doing his best Michael Jackson impersonation, Yankovic dawned a fat suit and broke out his finest dancing shoes for his classic hit “Fat” while other oldies “Eat It”, “I Lost On Jeopardy”, “I Love Rocky Road” and “Like A Surgeon” found themselves fused into an acoustic career retrospective montage.   In breaking away from how things have been done in the past, Yankovic’s acoustic medley provided a positive shift within the evening, one which allowed all of those in attendance an opportunity to gather themselves as we rolled into the final songs of the night.

Ending the evening with “White & Nerdy” and “Amish Paradise“, Yankovic and Co. left the capacity crowd chanting for more of Al’s diverse musicality.  The crowd was pleased to have Al take to the stage for one final time.  For this the last costume change, he sported a distinct long brown and white robe as he took Don MacLean’s hit “American Pie” to a galaxy far far away with his version, “The Saga Begins“. He proceeded to follow that up with a tune from a long time ago, a welcome and apt surprise as Al broke out the 1985 hit “Yoda”.

There was certainly a diverse crowd at this Weird Al show, with people ranging in age anywhere from 14 to 50, both male and female alike.  The best aspect of the evening (other than Al that is) was seeing how everyone participated throughout the entire evening, with the same ravenous fervor as the fan one seat over.  When the final chord was struck and the lights came up, there was no doubt that this sold out crowd had just witnessed something special.  A uniquely weird but extraordinary evening at the Schooner Room.