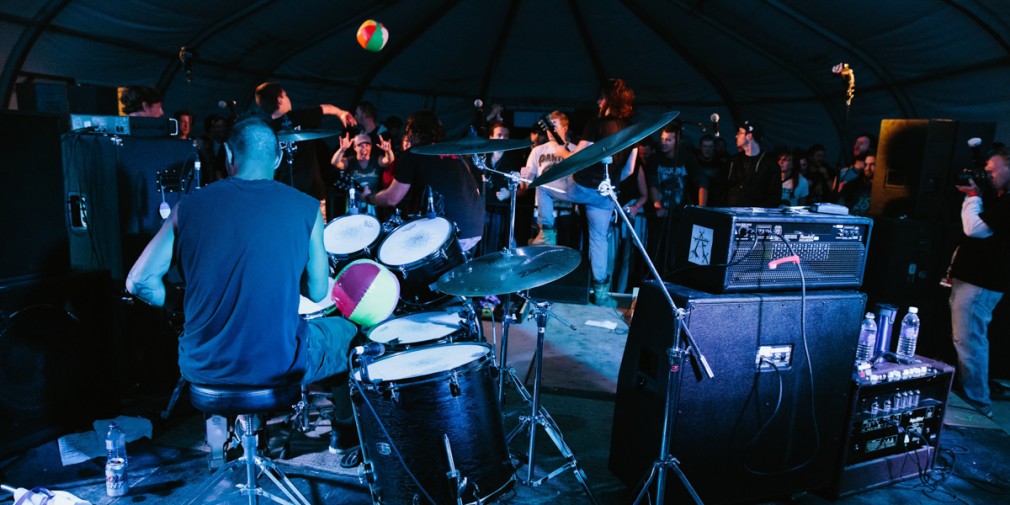 What a weekend it was at this year’s Maritime Metal & Hardrock Festival, I don’t think I’ve had that much fun in awhile. When you have a community of music goers in all kinds of music genres, that come together not only for the music, not only to support their local bands, but to let loose, and have a great time, you really have a good thing happening there. It’s especially true when you have this awesome line-up of bands who are out there to just have a great time.

This my friends, is the experience of the music festival, featuring… the band Last Kick.

And this year, it was all about the bands. I think more so this year, than the last couple of years. Every band that came out put on their “A” game. All the bands that were there, weren’t just out to promote themselves, or make a little money, they were there to put on a great show, and have the crowd just let loose. In the giant tent that housed the main stage of the festival, what would happen is that the bands would take the stage, and people would just pour in, and just involve themselves with the show. And then after the show people would just leave, catch their breath, hangout or whatever, and get ready for the next show. For me, there were times where I needed a break outside of the tent, and the next band would come out, and I’d be like, “I’m just gonna chill out here for a bit”. But man, when the bands started playing, and I started listening to the music, and the crowd had piqued my interest. I’d be like, “fuck it, let me in”.

I’ve just realized this, it’s kind of new to me; but there has never been a festival, that has spanned over 2 days, where I’ve actually been able to catch every single band playing. There must have been over 20 bands playing during the entire Friday & Saturday of the festival. Oh man, this was pretty cool. 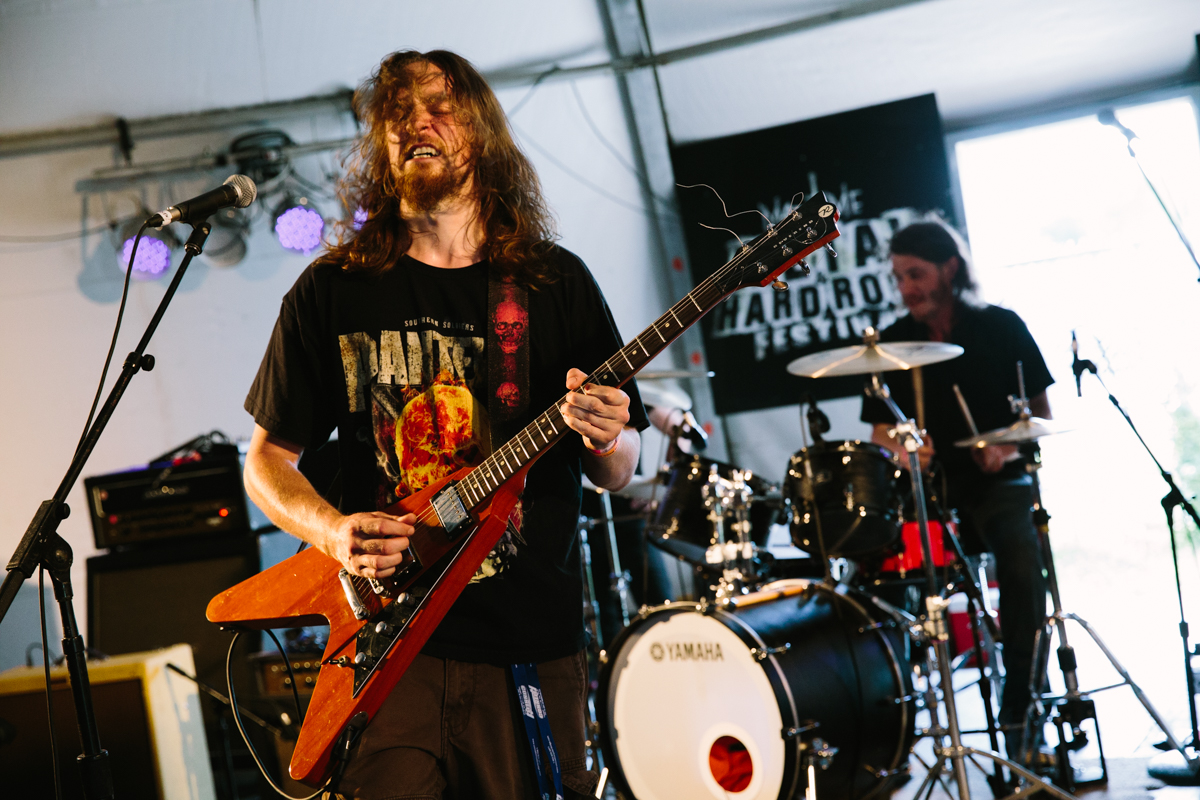 Some of my highlights of the festival, from Day 1, starting off with the band that opened the festival, Black Tooth Grin: great opener, very bluesy. If Smokin’ Entertainment (also the organizers of last week’s Smokin’ Blues Festival) needed a great transition from blues to hard rock, the definitely got it here with this band. AdverseFX were fucking great, love the low tuning of their guitars, they were the best sounding band of the night. Elevate The Virus, these guys were insanely awesome, they’re just a bunch of young kids rockin’ the show. I remember them well from last year’s band battle, and they were easily my favourite from Friday night. And oh yeah, I can’t forget the amazing Alice In Chains cover band that played, who go by the name Love, Hate, Love. I felt so nostalgic listening to their set, playing songs like “Them Bones”, “Would?”, and “Rooster”. I don’t necessarily go out to see cover bands, but I really digged how close they sounded to the band, and how awesome a performance they put on. 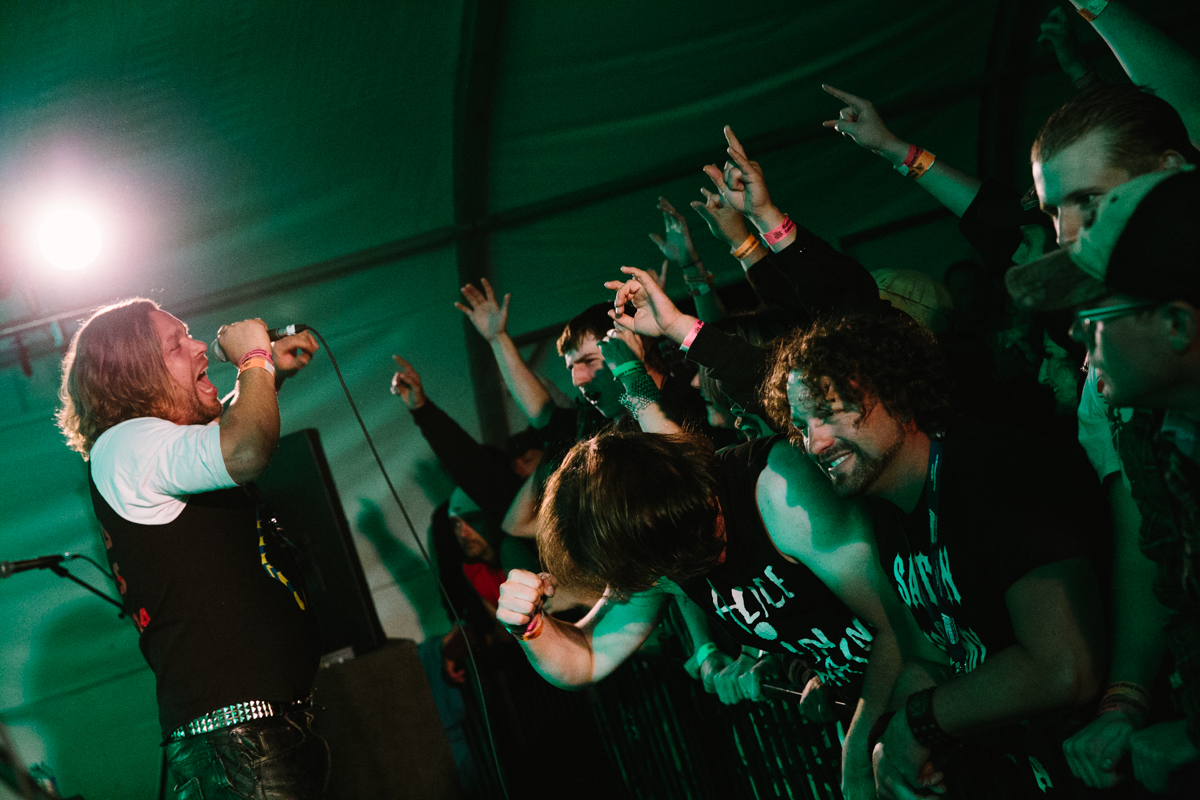 2 Minutes To Maiden rockin’ to a packed crowd.

I liked the fact of how diverse the crowd was at the festival, and how so many people knew the words to all of these songs. There were bands playing from so many different genres within the “Metal & Hardrock” broad spectrum. You’ve got classic metal, hard rock, grunge, nu metal, stoner rock, and some of the broad newer metal genres (I know, there’s literally like 10 of them). And everyone just comes, and people just know the words to the songs, if it be newer or older material, mainstream or local. It’s fucking cool. 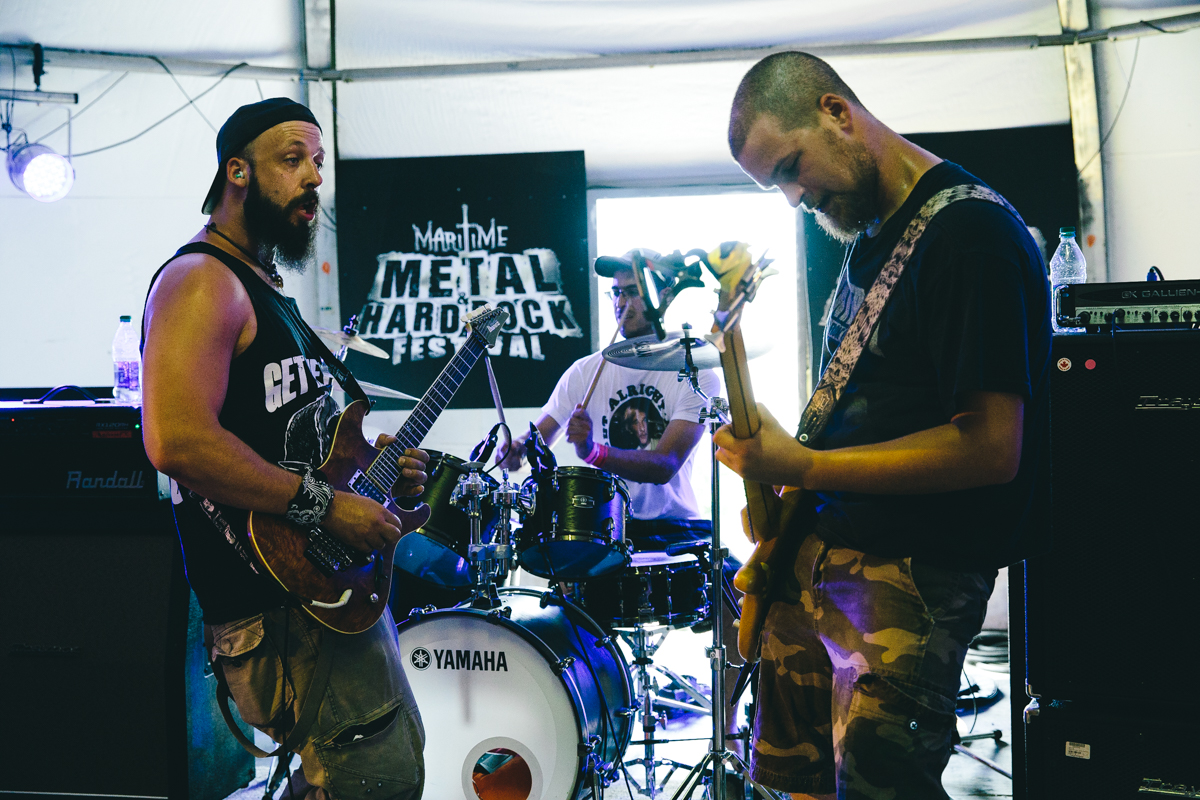 ADN, winners of the band battle.

As for Day 2 highlights, there were quite a few bands, probably just too many to cover. I was given the honour to judge the “Band Battle” that happened during Saturday afternoon of the festival. I’d like to mention all of the bands that played during the band battle, I don’t think they were given a mention earlier (it was kind of a surprise), and they are lesser known in the community. The bands that played were Obscure Illusion, Apocalyptic Hate, Generation Idiot, Red Hail, Dark Shine, and ADN. For me and the judges, we ran into some serious tiebreakers, and in the end, northern New Brunswick’s ADN won the battle. I was quite impressed by their stage presence and sound (they were also my top pick). But to me, they were all pretty fucking good.

Continuing on with the day’s highlights, right after the band battle, Doom Machine took the stage. I’ve seen this band play numerous times in and around Halifax, and also up in the valley. I can’t deny the fact that this band is so badass, their sound is just so heavy, and very low sounding. Their music just makes me want to go, “MUAAAAAHHHH!” Enemy Designed played arguably my favourite performance of the weekend. I must have been right into the deep voice bands that were playing around supper time, they were just so so good. They were having a lot of fun on stage, the crowd was having a good time, and I was just right into their show. 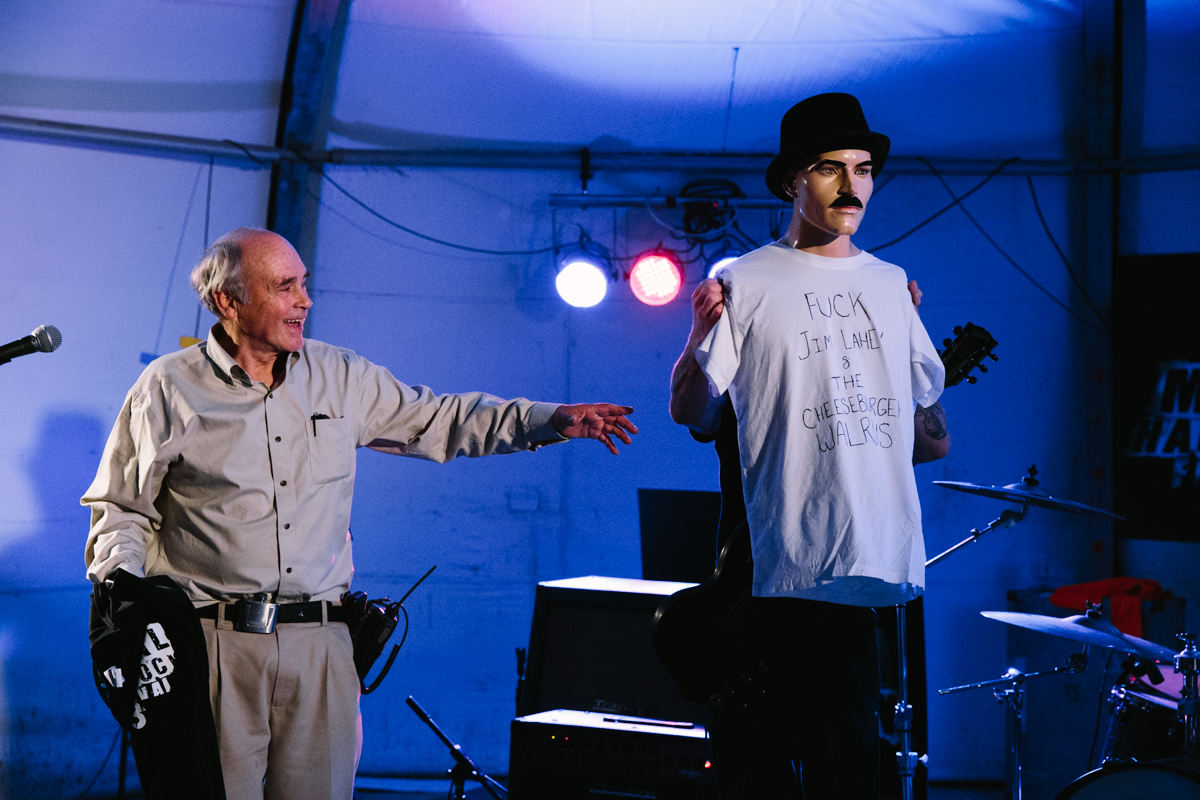 Between shows, Trailer Park Boys’ Mr. Lahey & Randy were stirring up a shitstorm on stage, “in and around” the festival campgrounds. On stage, they performed a comedy act that was pretty funny. Friendly guys, they were interacting with the crowd and everything. And “in and around” the campground they were hanging out with everyone, up to their old antics. They’re quite approachable, and love having a good time. They made for good guests at the festival. 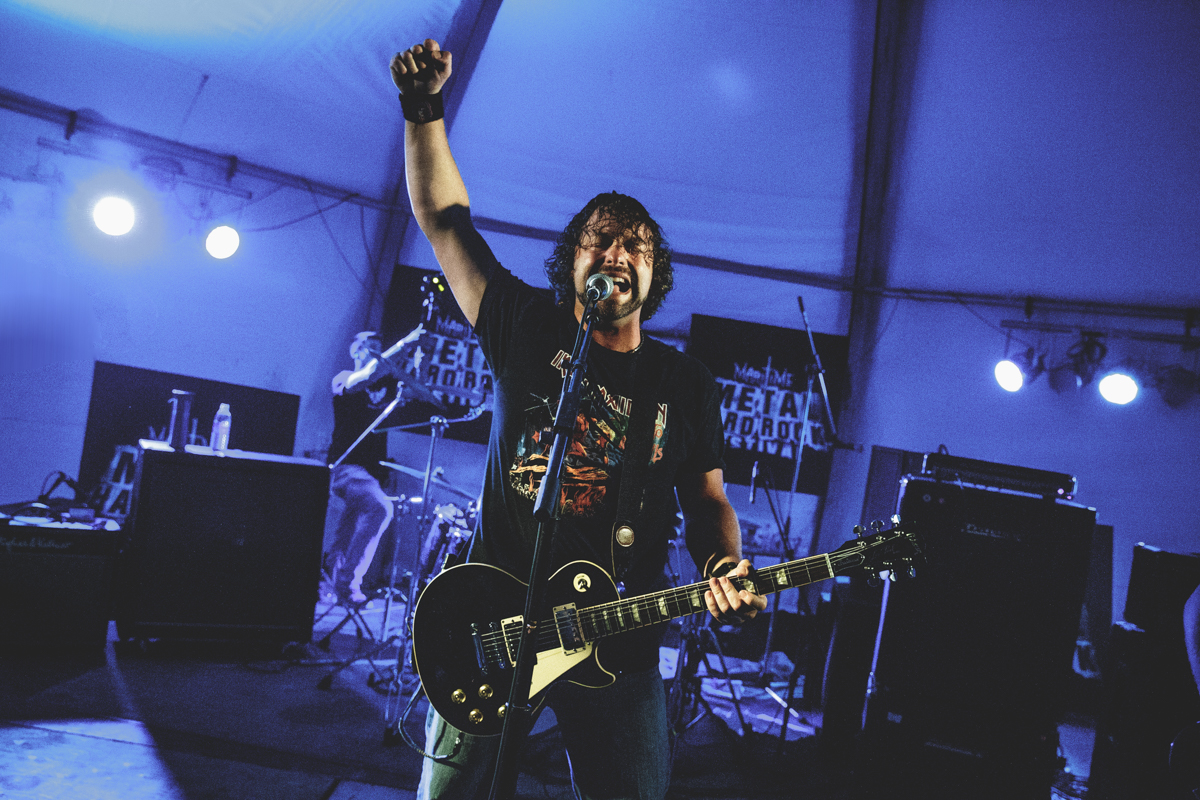 Anyway, moving forward: Tri City Villians… where the fuck did this band come from? If I knew what I know now about these guys, and I was building up a Metal & Hardrock festival, I would include this band every time. Crazy good show, that crowd was absolutely crazy for this band. Their music and stage presence absolutely put the crowd into a frenzy. It was nuts. They’re a hard rock band from Halifax; if you find them playing downtown, check them out.

The headliner of the show/last to appear on stage was the Pack A.D. They had flown all the way from Vancouver to a play a set, and they didn’t disappoint. They went through their vast catalog of songs, including some my favourites such as “Creepin’ Jenny”, “Haunt You”, “Sirens”; and in their encore, “The Water”… oh man, they are so good. After their set, I called it quits. I went back to my tent, and (after 2 days full of music), I simply crashed.

Just to mention the festival itself, Windsor Exhibition Grounds is the new home for the Maritime Metal & Hardrock Festival. Good spot, it definitely holds the future of the festival to come. And it’s where you’ll find me next summer.