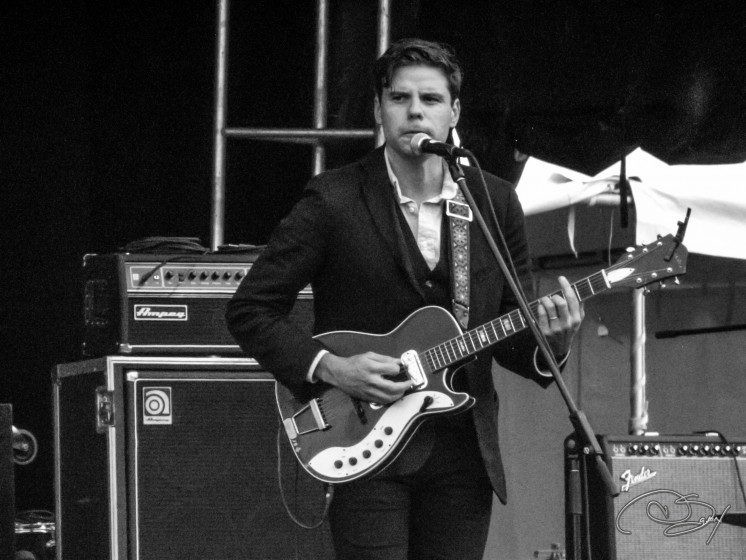 In the lead up to this past Tuesday’s Bahamas show at the Cohn, there was an interesting debate raging over those people slapping ‘The’ in front of the Afie Jurvanen outfit Bahamas.  It was one of those trivial, inconsequential arguments which rear their heads all too often in the twittersphere, but then again Bahamas is somewhat of an usual name for a musical act.  However, after the sold out show at the Rebecca Cohn auditorium this week, it makes a lot more sense (more on that in a bit).

It’s funny how things change over the course of three years. Back in September of 2012, I remember standing on the Garrison Grounds trying to figure out Afie Jurvanen and his comrades’ (aka Bahamas) sound, as it was this interesting, somewhat sleepy fusion of new and old, but ultimately was more interested in seeing Father John Misty.  Fast forward to July 2015 and I’m sitting 4th row for a sold out Bahamas show,  a tour in support of the band’s most recent release (Bahamas is Afie) that found its way onto my best of 2014 list. The wonderful Mo Kenney was recently slated to this exciting bill, a provincial treasure who is much beloved in these parts, and personally my exposure to her work was rather limited. Needless to say the bar was rather high (especially since Jeff raved about her performance following  the recent Joel Plaskett performance at this very venue).

It was shortly after the clock struck 8 that the house lights dimmed and the newly minted runner Ms. Kenney strolled onstage with her guitar and proceeded to charm the crowd with her beguiling performance.  Between songs, Mo shared pieces of her life with a wry and sardonic sensibility telling us about having to strike an amicable balance between her love of cheeseburgers and disdain for running, her days at the North St Sobey’s and her encounter with a pizza loving pigeon.  She had this comfortable ease about her, and that translated to her fantastic hook-laden folk-pop tracks such as “I Faked It”, “Deja Vu” and “Telephones”. They just drew you in with their forthright honesty, but the heartbreaking tale of befriending a unique classmate during math class, and his subsequent disappearance which is told in “Wind Will Blow” was the true standout, with its haunting beauty and soaring vocals.  If you’re not familiar with Mo’s work, at times I was hearing similarities to Tegan and Sara, City and Colour and even producer Joel Plaskett all shining through at times during the set.  The set was closed out by a delicate David Bowie tune entitled “Five Years”.  The song’s (and set’s) unexpectedly abrupt and dramatic ending was a shock to the system, but it was one of my favourite opening sets in recent memory.

Then it was time for time for Afie (Vocals/Guitar) and his comrades Christine Bougie (Guitar), Jason Tait (Drums), Darcy Yates (Bass) and Felicity Williams (Vocals) to take the stage.  You couldn’t have chosen a better venue than the Cohn when the show was initially announced, because in listening to Bahamas is Afie, you can hear the tone of Afie’s voice and imagine it simply filling that auditorium space like a glove. From the moment the band walked onstage and the opening notes of “All I’ve Ever Known” were uttered, you knew the crowd was in for a treat, as that space sounded as good (if not better) than imagined.  It actually improved upon the studio recordings, as the little bluesy licks, interludes, and bent notes of Afie’s guitar work are buried somewhat on the album, but here they added an interesting layer of musicality that was somewhat unexpected, to an already warm and lush sound.

I thought to myself about 4-5 songs into the set, about the lack of interaction between the singer and the audience and wondered if I would be having conversations with people afterwards (like I had following the Tragically Hip show earlier this year) about the lack of interaction.  Fortunately, this was not to be the case, as Afie stopped to explain his somewhat unusual choice of attire (which was somewhat odd, considering the show in 2012 had him performing in a suit).  He explained that it was initially a choice made of necessity at a roadside market, but his brilliant wife instructed him to cut the bottom free to make the over-sized sweatshirt into more of a flowing t-shirt.  It was a great bonding moment, and then he dove back into the set.  It was jokingly explained that while the album was released a year ago, it does take that long to get to Nova Scotia, but he was also appreciative that it was a sold out show, as Afie wasn’t sure how many people were still familiar with his work.

The crowd was more than pleased with a set which ran roughly 90 minutes and includes cuts from all 3 Bahamas records, including the prerequisites from Bahamas is Afie such as the 10-years-in-the-making “Stronger Than That”, “Waves” and the set closer “All The Time”.  It was the Barchords cut “Lost in the Light” which really had this writer swooning, as it showcased how good the band sounded in this room; the sound simply soared and had the appreciated crowd absolutely enthralled.  Then with another pair of tunes, the band bid the crowd adieu and the house lights came up.  Outside, it was a fairly typical Maritime night, wet, damp and sort of blustery, but inside it was a warm summery breeze flowing from the stage, from Afie Jurvanen’s warm, smooth delivery and the support of his distinguished band.  It was clear once all was said and done, exactly why Afie is Bahamas.