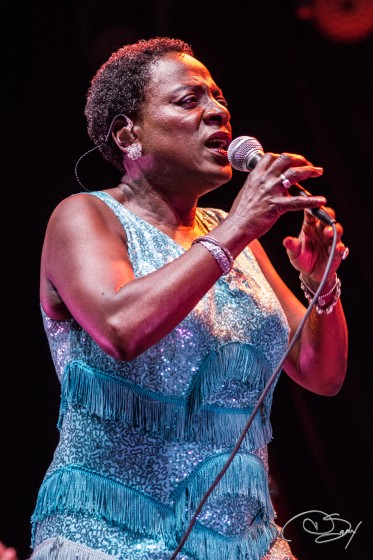 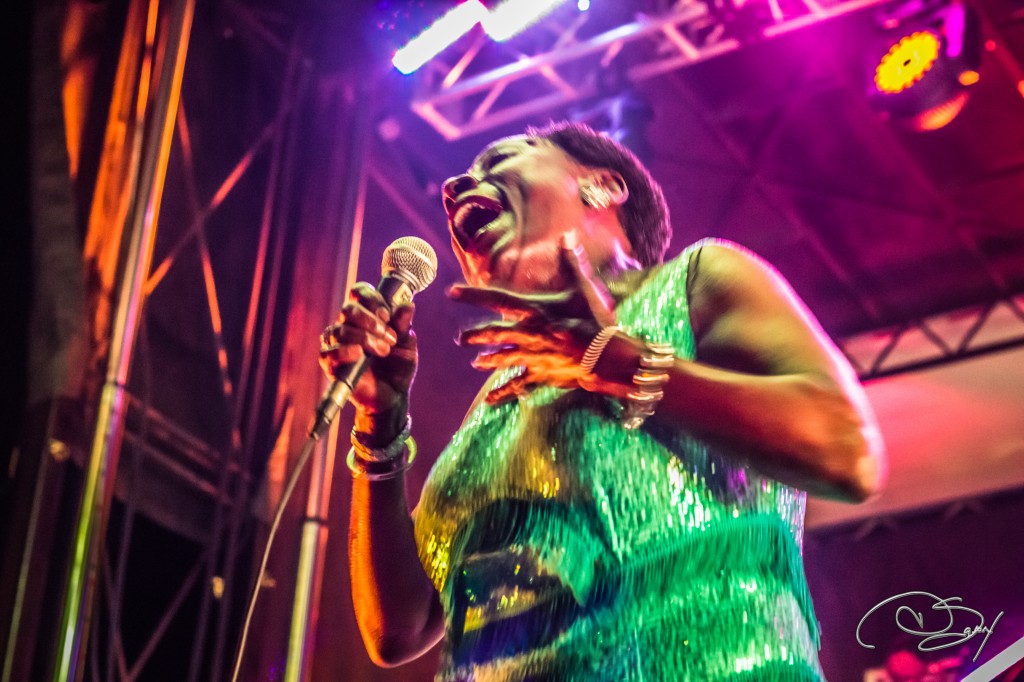 Growing up, I was always a fan of Motown Era Soul, and acts such as James Brown and Parliament who took the funk sound to new heights. When the announcement broke that the Marquee act of the 2015 TD Halifax Jazz Festival would be Sharon Jones & The Dap Kings, I knew it wasn’t a show to sleep on. With the addition of local Fusion Jazz collective The Chronos Band, the lineup was shaping up to be one of the festival’s marquee show pieces.

At 8:30pm on Wednesday, the 9 piece unit known as The Chronos Band commandeered the stage for well over an hour, and treated the crowd to an electric set of high powered jazz fusion. The set included some guest appearances by Roxy Mercier (of Roxy and The Underground Soul Sound) who joined the band for a bluesy take on the Rolling Stones classic “Satisfaction” and local chanteuse extraordinaire Cyndi Cain joined the band for a tune towards the end of the set. It was a tightly packed set of tunes which clipped by remarkably fast, and allowed the changeover to start for the headliners of the evening. 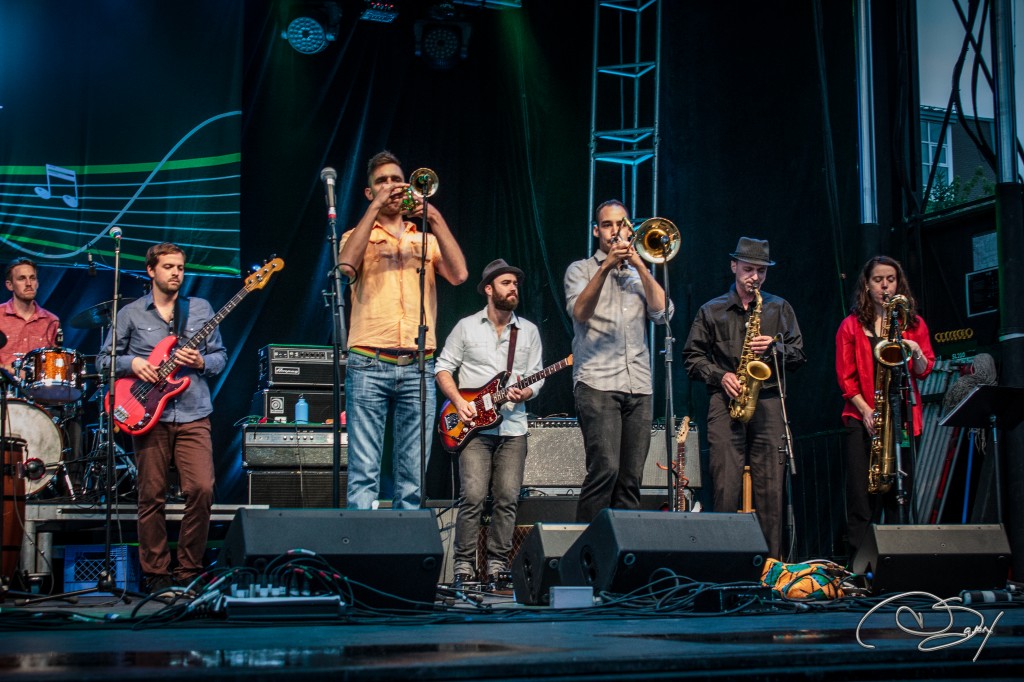 Next on the docket after the changeover were the incomparable Sharon Jones & The Dap Kings.  The Dap Kings took their place on stage and set the tone for the evening by introducing themselves and giving the audience a taste of what was to follow.  From there we were off and running.  Let’s be honest here, the Motown era has clearly long since disappeared from our collective rear-view mirrors, but much like a beloved friend or family member who has passed, their memory lives on long after.   Sharon Jones & The Dap Kings are the embodiment of that sentiment; they are a throwback to a bygone era but they are not attempting to put on a costume and mimic those who have come before them, instead they are paying tribute in the best way possible: by crafting new original music founded in the styles and sounds of that era. 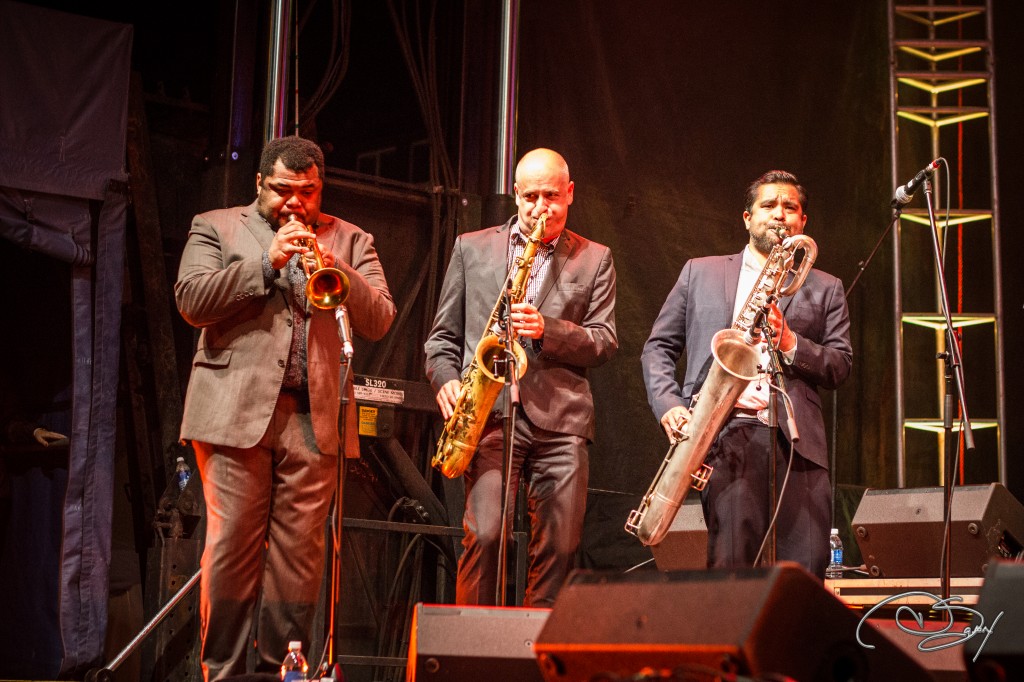 Shortly following the Dap Kings was the tandem of Saun and Starr (otherwise known as the Dapettes), who continued the prep the crowd for what was to follow.  The audience was treated to a trio of selections from Saun and Starr’s debut album (Look Closer) released earlier this year.  It was a great opening salvo of warm, inviting 60s era soul music.  Then, the duo made way for the evening’s lead singer to take the stage.  The crowd was already grooving so when the Dap Kings emcee/band leader Binky Griptite began the introduction for Mrs. Jones, the buzz was palpable.  In a flash, the stage was awash with this beam of shimmering teal, fringe and positivity. 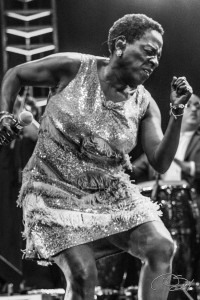 The lady whose name is found at the head of tonight’s marquee bounded on stage like someone a third of her age.  The ear to ear grin said it all, Sharon Jones was happy to be on that stage performing for this gaggle of receptive humans who had congregated on the Halifax waterfront to bask in her presence on this Wednesday evening.  A disturbance had rolled through shortly before show time and doused the concert grounds, so the stage and dance floor were both littered with a mix of puddles and tiny lakes.  This didn’t slow the proceedings down one notch, and Jones bounded and shimmied from one side of the stage to the other. At times she was forced to wrestle with her earpiece as it attempted to derail the proceedings, but being the professional that she is, she powered through.  The set list started off with the infectious “Stranger to my Happiness”  and included a fantastic cover of the Motown staple “I Heard It Through the Grapevine”. “People Don’t Get What They Deserve” and lead single “Retreat!” (from 2014’s Give the People What They Want) closed out the set. 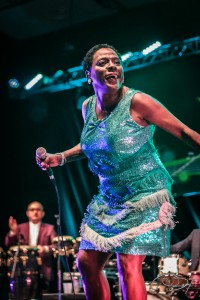 All in the all, the title of that 2014 song couldn’t be more apt for this evening’s performance.  The tone turned serious when Jones talked about her recently vanquished cancer and explained how the track “Get Up and Get Out” took on an entirely different meaning during those difficult months.  It was after seeing her sickly form in the mirror peering back at her, when she made the decision to fight the disease and take back her life,  which is what the song now speaks to.  The eviction of that disease from her system.  She quickly flashed her warm inviting smile and moved on with the show with a vigor and energy which would have tired out even the most seasoned performer (I have doubts that Mick Jagger would be able to keep her pace).  Sharon Jones was a luminous ball of positivity and was backed by one of the best bands in the industry, she gave everything and then some to the crowd.  Unfortunately, with noise bylaws being what they are, the show concluded just shy of 11:30, but without that bylaw it could have easily gone on for another hour at least.   It was a show where everything clicked: the weather turned around, the crowd was receptive and chill, and Sharon Jones was as happy to be on stage performing as we were to be there watching.   I’m sorry if you missed this one, it was one for the ages.