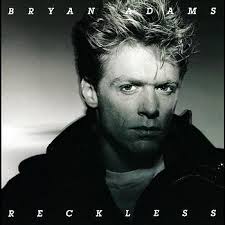 February is one of those months that most people choose to forget.  People are still feeling the pinch from the Christmas holidays; it’s dark when you wake for the day and dark when you get home from work; the temperature is usually close to the coldest of the year and to top it all off all you can see for miles is snow (well, here on the East Coast anyway).  But with all of that pushed aside there is always the possibility that something will come along and sweep away the winter blues, and on February 18th 2015, that something took place.

Canadian music icon, Bryan Adams, took to the Scotiabank Centre stage with a confidence and ease that most musicians only hope to find.  Celebrating the 30th anniversary of his fourth studio album, Reckless, Adams and co began the evening by announcing that they would be playing the album in its entirety.  I admit that even though I’m a fan of Bryan Adams, I was unaware just how many hits were spun from this multi-million selling album.   “One Night Love Affair”, “Run To You”, “Kids Wanna Rock”, “Heaven”, “It’s Only Love” and “Summer of 69” were all played within the first dozen songs of the night.

Dressed head to toe in black, Adams wasn’t there to wow the audience with an elaborate stage presence. Instead he opted to let the music to do the heavy lifting, while long time guitarist and partner in crime, Keith Scott, entertained the crowd with both his personality and skill.

In moving between songs that would cover his entire career, Bryan Adams not only gave the people what they were looking for but also proved to all that his extensive library is jam packed with an onslaught of hits.  “(Everything I Do) I Do It For You” and “Please Forgive Me” both brought a gentle touch to the evening while songs “Cuts Like  A Knife”, “Can’t Stop This Thing We Started”, “18 Till I Die” and “The Only Thing That Looks Good On Me Is You” all had the near-capacity crowd dancing in the aisles.

With 28 songs knocked out of the park, and over two and a half hours spent reminding Halifax exactly why he is considered one of the greatest musicians to ever come from our beautiful country, Adams, Scott and the rest of the gang graciously took a bow and thanked the rambunctious for their participation in the nights festivities; and for a brief moment on a dark and cold February evening, everything seemed right.