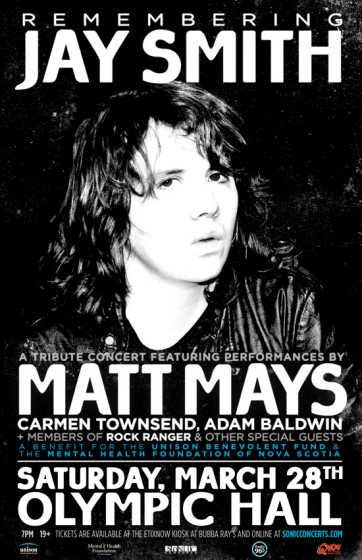 Matt Mays, Carmen Townsend, Adam Baldwin and friends gather together to celebrate the life of East Coast rocker Jay Smith, on March 28th, 2015 in Halifax at the Olympic Community Center.

The show will support the Unison Benevolent Fund and the Mental Health Foundation of Nova Scotia.

“At the heart of East Coast music for over a decade, Jay Smith founded and fronted Cape Breton trio Rock Ranger, released a self-titled solo album in 2011, won an East Coast Music Award for the song “We Are Young And So Is The Night” – which he co-wrote with Gordie Sampson – and spent six years as lead guitarist in Matt Mays’ band, playing alongside Adam Baldwin. Jay passed away while on tour in 2013.  Two years later, his spirit and passion for music still loom large in the music community across Canada.  The Imperial in Vancouver hosts a similar tribute concert on April 1.”

The Unison Benevolent Fund is a non-profit organization that provides counselling, emergency relief and benefit programs for those in the Canadian music community who face personal or professional challenges due to hardship, illness, unemployment or economic difficulties.

The Mental Health Foundation of Nova Scotia is a registered charity dedicated to improving the lives of Nova Scotians living with mental illness, and their loved ones. The foundation raises funds for vital programs and services that help make this possible, province-wide.

“My life was better with Jay in it, so it has become very important for me to help shake the disgrace around the word “suicide,” and to let those in the grips of that darkness know there are ways out.” – Adam Baldwin

For more information on the Unison Benevolent Fund and the Mental Health Foundation of Nova Scotia or to donate now, visit: www.unisonfund.ca and www.mentalhealthns.ca

Tickets are $34.99 in advance and $39.99 day of show (including tax and service charge) and are available at the etixnow kiosk in Bubba Ray’s Sports Bar and online at www.sonicconcerts.com.  Delivery fees may apply.

This show is general admission standing and restricted to ages 19+ with VALID ID.  Doors open at 7 p.m. Show starts at 7:30 p.m.

Tickets can be purchased online here.