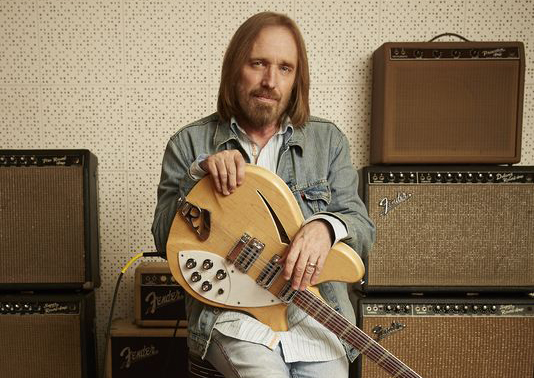 It was recently announced that new kid on the block, Sam Smith, has agreed to terms that will pay one of music’s most well-known artists, Tom Petty, a reported 12.5% writing credit for Smith’s massive 2014 hit, “Stay With Me”.  Apparently the case was made when it was noticed that both the verse and chorus to Smith’s “Stay With Me”and Petty’s “I Won’t Back Down” had similar melodies.

Smith has dominated the pop/rock airwaves this past year and this single was everywhere, eventually finding itself in the number one position on the Billboard Adult Top 40.  There might have been some out there who picked up on the similar sounding melodies, but it was never a thought that crossed my mind, whereas Petty’s last involvement with melody stealing (see “Dani California” vs “Mary Jane’s Last Dance“) was an outright ripoff.

There are two things that really stand out in this latest case of melodic mash-ups.  First off, we live in an era where so many artists now have the ability to record music that it is almost impossible to not create a song that sounds somewhat similar to another song out there.  With billions of people living on the planet, is it really that much of a stretch to believe person A living in the northern tip of Ontario could come up with a chord progression and pair it with a tempo that might just resemble something from another era.

Whether we like to think it or not, artists, musicians and everyday people are influenced by the music that they are listening to, to a certain extent.  You may not realize this, but deep down, located within your very own built-in iTunes, everyone has a melody swirling around that was partially taken from a classic Elvis Presley hit, maybe an Aerosmith single or who knows maybe even a Nickelback song.  The point is even creative people are influenced by those that came before them.

Do the songs have some similar tones, yes; but is it really so close that people are going to stop in their tracks and wonder why Sam Smith is ripping off Tom Petty, I doubt it.

Secondly, why the lawsuit?  I do recall a while back a little hit by New York indie rockers The Strokes, called “Last Night“, sounding an awful a lot like Petty’s ’77 hit “American Girl“…and who can forget the most famous mash-up of 2006.

In the case of Petty vs The Strokes, the New Yorkers openly admitted that they used Petty’s hit as the basis of their own song.  The response from Petty’s camp was nothing short of a pat on the back and a good luck to the lads from Gotham. The subsequent Petty vs Red Hot Chili Peppers case resulted in much the same reaction from Petty,  he was even quoted in Rolling Stone magazine as saying “I don’t believe in lawsuits much. I think there are enough frivolous lawsuits in this country without people fighting over pop songs.”  In both of these examples it is extremely easy to hear where The Strokes and RHCP both used Tom Petty songs as the basis of their hits, more so than Sam Smith.

So why come down now with the hammer now?  Thanks to the countless number of hit singles, albums and tours Petty has released or embarked upon for the duration of his career, he now has more money than he’ll ever be able to spend (or his children’s children for that matter), and from a musical icon point of view, the small similarities you can hear between the two songs will do absolutely nothing to hinder his greatness once it is all said and done.

Petty, for whatever reason, felt the need to now step up and drop a lawsuit on Sam Smith, even when he could have easily shrugged off the blatant case of musical plagiarism.  It’s quite possible that Petty finally had enough of these cases of alleged “plagiarism” swirling around his musical gems; maybe he’s finally hit that stage in life where he feels that he’s earned the title of being the cranky old man kicking the kids off his lawn; or maybe Petty has had one too many dances with Mary Jane and is finally beginning his dissension among the ranks.