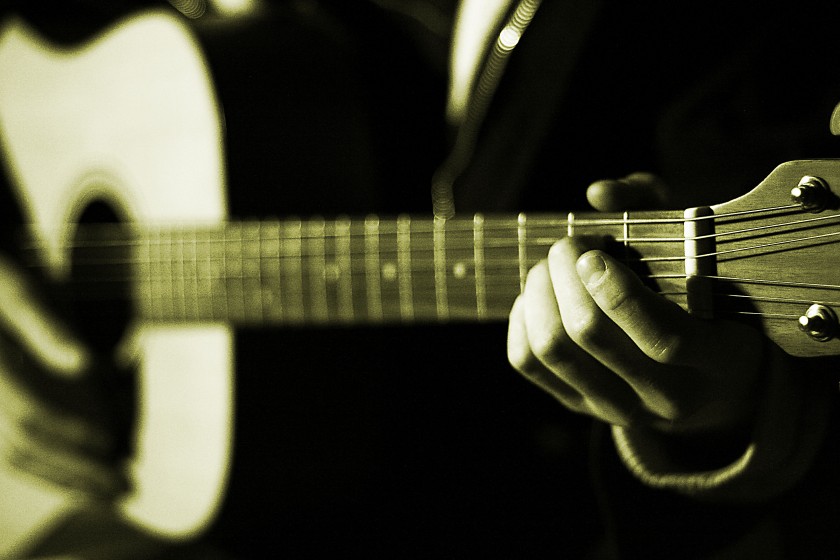 Now in its ninth year, local singer/songwriter Bruce Guthro’s annual songwriters circle has become a well oiled machine.  Four musicians sit in the middle of a room, across from one another as if they were each sitting in the corner of a square facing the opposite side, and proceed to drink wine, laugh and joke with one another as they tell stories about the songs that have helped each artist carve themselves a career within the music industry. The stories range from sombre to outright hilarious and even at times walked the edge of crass and dirty (but all in good jest).

Anytime you put four random people together to perform on a stage, the chances that the group mesh can go either way.  Sometimes one person’s style or sense of humor may not necessarily match with the person he/she is sitting next to or across from, and sometimes it can be incredible how easily each person can feed off of one another.  This evening’s show seemed to fall somewhere in between.

Right from the onset, it was plain to see that Guthro wasn’t his joking self.  Reeling from a flu, it was easy to see that simply sitting on the stage this evening was a battle and kudos to him for making it happen, however at times it seemed as though the sickness was getting the better of his stage presence as he appeared to be mildly irritated by some of the in-house, friendly bantering between the other musicians.  Musically, Guthro has to be considered one of the premier songwriters in the country.  His ability to meld words and melody are nothing short of spectacular, placing him in a class with very few.  From a vocal perspective there were times this evening that his voice was downright haunting which led to some of the most intimate musical moments that I’ve had the pleasure of being apart of.

Renowned songwriter Gordie Sampson is as steady a musician as you will find. He wasn’t the best guitarist this evening, nor was he the best vocalist, however his overall value as a performer is top notch and he’s still a better guitar player/singer than most people out there.  Strumming his way through the evening, Sampson hit the crowd with a good mix of his solo work and hit songs he has written for others.  Fan favourites “Jesus Take The Wheel” and “Sunburn” went over extremely well and allowed for some welcome crowd participation.

The first unknown (for me) of the evening was Doris Mason.  Growing up in New Glasgow and moving to Halifax, Mason has been around the music scene for years.  With a wealth of talent and a likeability factor which was through the roof, I was interested to hear how her style of music would fit in with the three guitar players.  Sitting behind her Roland piano, Mason proceeded to play song after song that seemed to make up the soundtrack to a Broadway play or an episode of Glee.  She could sing and she could play the piano, but her style and sound appeared to be slightly off kilter for a show like this, to the point where at times her background piano didn’t make much sense with the songs the others were playing.

The second unknown (again, for me), Charlie A’Court has been on my radar for a while now but I’ve yet to have the pleasure of seeing him live.  I’ve yet to hear anyone say a bad thing about his talent and after this evening I can see why.  A’Court’s songs were shaped around his massive vocal range and his top notch guitar skills.  Sliding from end of the neck to the other, A’Court didn’t play the guitar like it was an instrument, instead it acted like a part of his body that needed no thought to control.  Jumping in and out of songs all evening, A’Court’s bluesy, rock, gospel style of playing appeared to fit in any style of song that was thrown his way.  After hearing him this evening, I have to say that he is definitely underrated from a musical perspective. This is one performer that is flying way too low under the radar and really needs to be appreciated for the immense talent that he really is.  He immediately moves into my category of can’t-miss shows.

All in all the show was well done, and other than the idea that Doris Mason really didn’t really fit in alongside Guthro, Sampson and A’Court, the show went off fairly well.  With the 10th anniversary looming on the horizon next December, I encourage everyone who has any interest in hearing singer/songwriters perform, to purchase tickets for any of these shows.