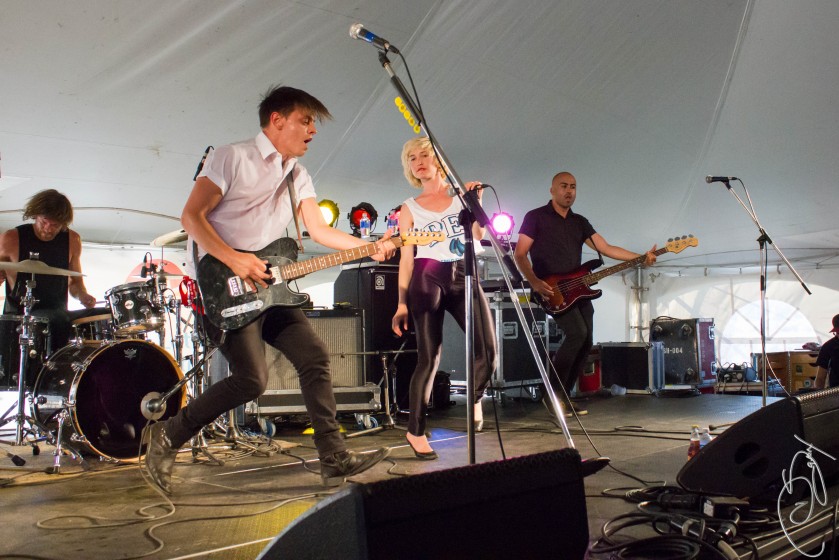 This past Saturday marked the kick off to the 2nd Weekend of the 2014 Big Red Music Festival in Charlottetown, Prince Edward Island. As I had prior commitments, I didn’t arrive on site until shortly after 6pm which meant I didn’t get to see acts such as The Town Heroes, Mike Boyd, Matt Mays or the Bahamas, which was a bummer, but I was stoked to arrive in time to catch the July Talk set.

For the uninitiated, this was a line up which was pretty well stacked from top to bottom with the aforementioned acts, in addition to such notable artists/bands as Death Cab for Cutie, Kardinal Offishall and The Killers who served as the headliners for this date of the 2014 Big Red Music Festival.

I have to say that the setup of having the parking lot across the street, and parking only costing a paltry 5.00 was fantastic, it made accessing the grounds a breeze (once we managed to find an ATM and secure some actual cash).  We hit the media check in, got our passes and we were off to the races….sorta.   We were fortunate enough to catch the tail end of the Drive By Truckers set, which was decent, but from the more definitively Country tunes we heard as we hunted for an ATM it wasn’t something I can say was in my wheelhouse and felt a bit out of place with the other bands on the slate for the day.  Once they wrapped up, we then had to figure out where they opted to hide the second stage. 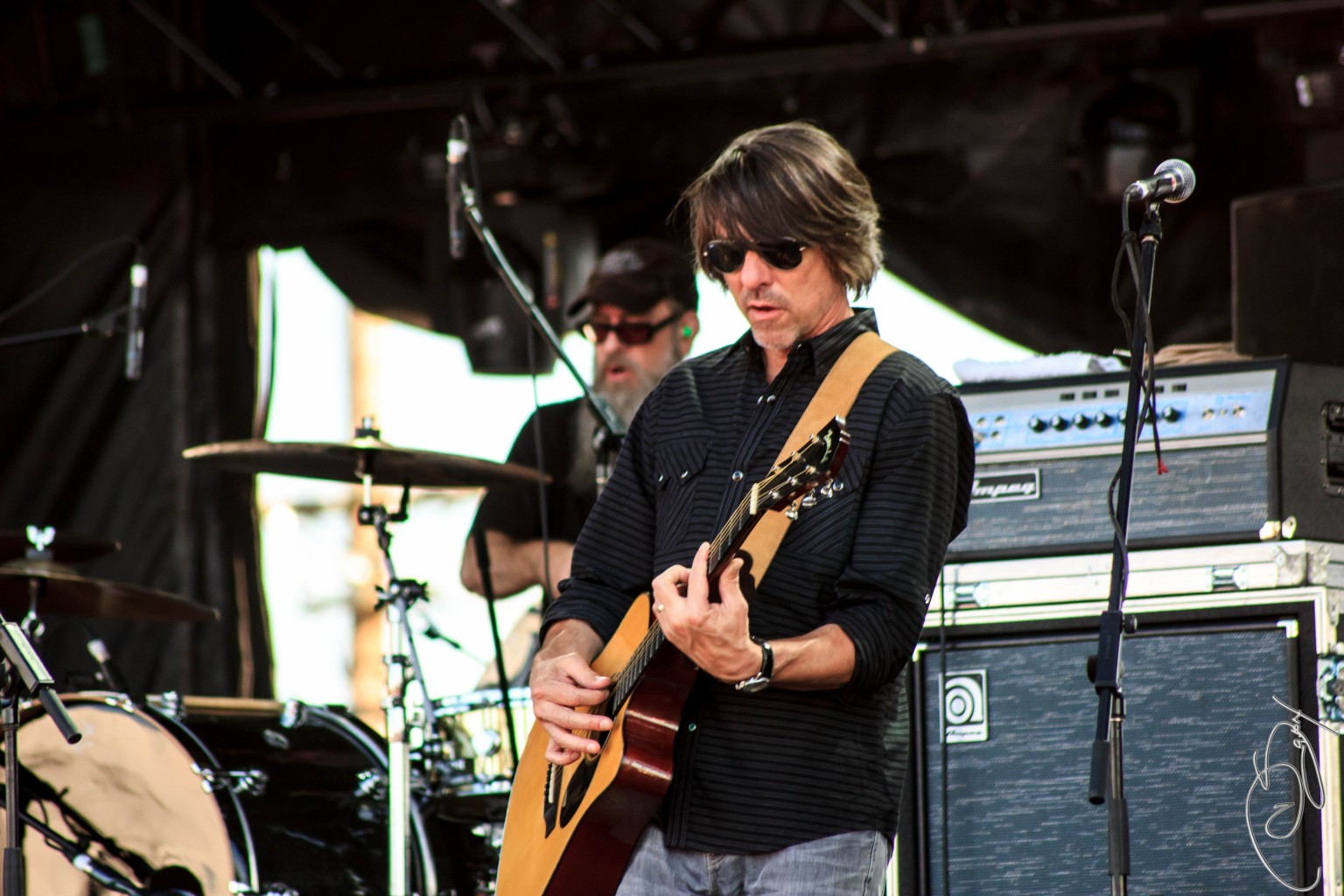 After some scouring of the grounds, we finally figured out that we had to head into the 19+ section of the grounds to make it to the second stage.  This was one of my major gripes with the set up, as it funneled a mass of people though 2-3 lanes past a security team to keep checking to ensure the crowd was old enough to partake in these tunes.  I felt this was wholly unfair to the underagers in the crowd who were there for the music, and weren’t able to see Mike Boyd, July Talk, The Town Heroes and Kardinal Offishall, to take their money and shaft them out of half the bill seems a bit harsh. 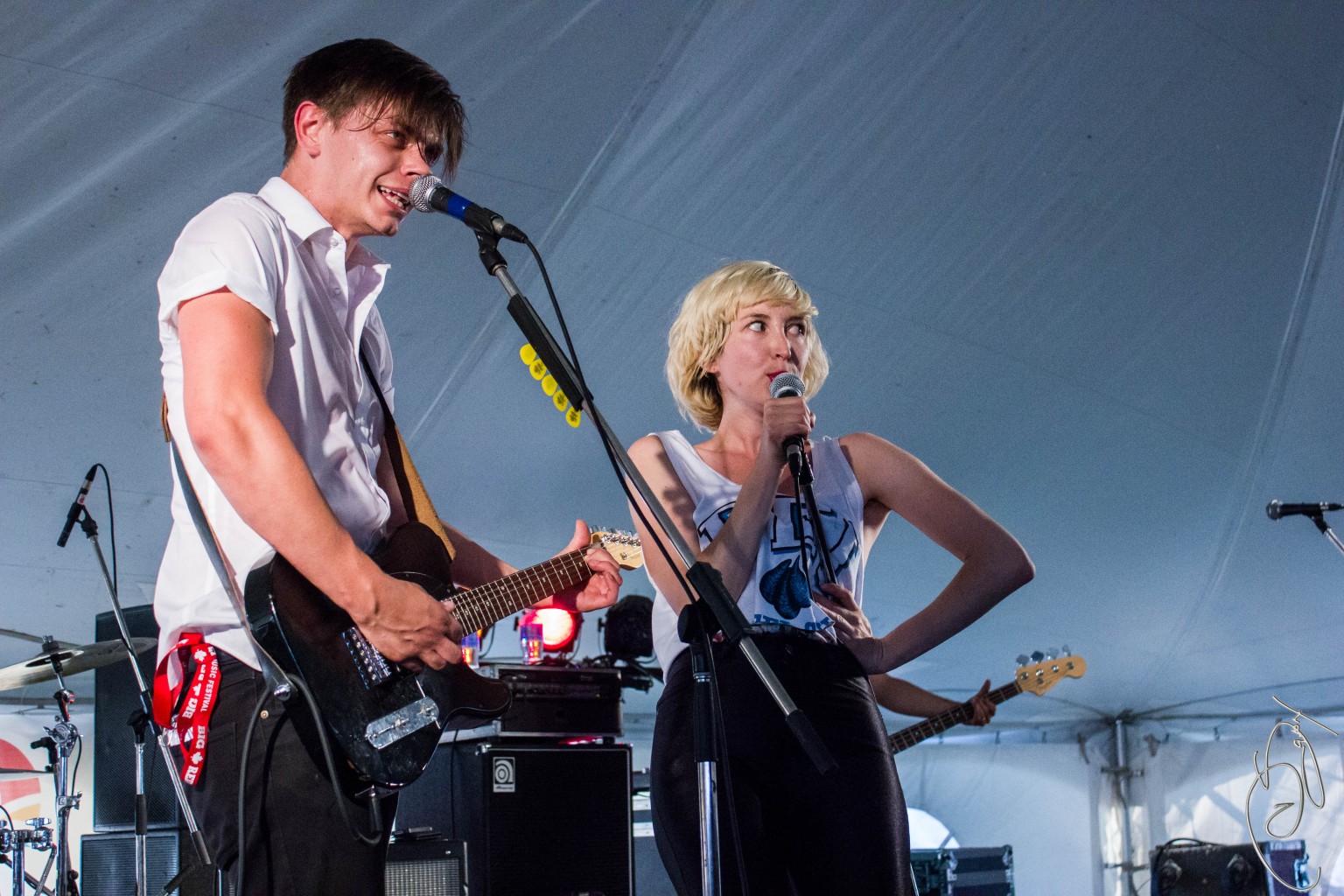 Once we got past the funnel, we rushed to the stage only to have our faces melted off from Toronto’s July Talk who were more than happy to make their return to Charlottetown after having to scrap their last planned visit due to an unforgiving snowstorm (the joys of touring the Great White North in the winter months).  The intoxicating fusion of aural salty sweetness (or a musical Beauty and the Beast if you will) will draw you in.  The crowd was more than ready to sweat and rock out along with Peter, Leah, Danny, Ian and Josh.  While it was a more intimate performance than the one earlier at the Alderney Landing Stage in Dartmouth, this one did not lack the intense potency the band displayed on Canada Day.  For me this was one of the highlights of the day, and solidified me as a fan.  While I would have loved to stick around for the tail end of the set, I had to make tracks to get to the main stage to prep for Death Cab For Cutie. 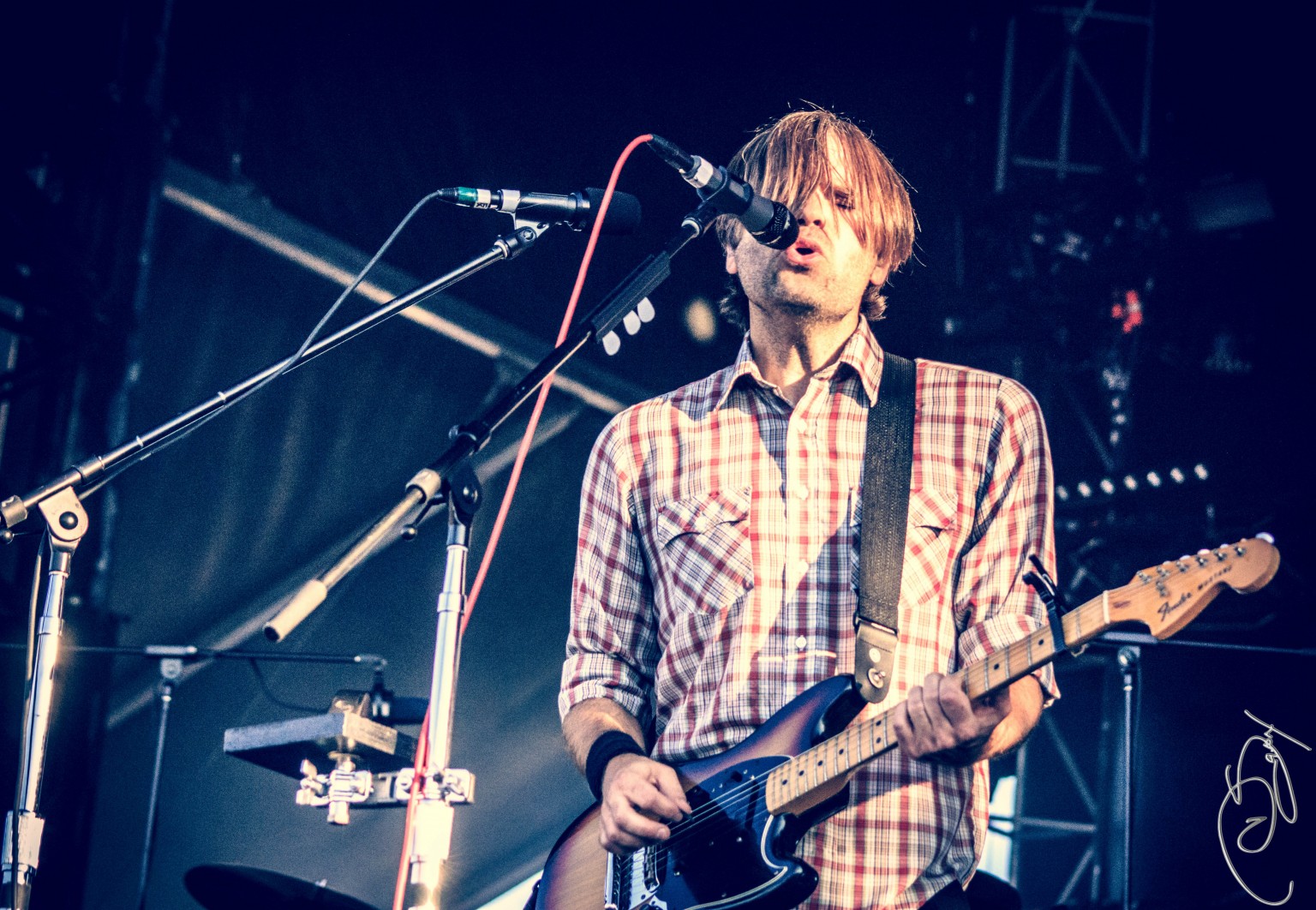 Much like Justin, Death Cab for Cutie was the wild card of the festival for me.  I too am not as intimately familiar with their catalogue as I am with many of the other bands on this lineup, so for this set I was going into blind.   I was personally surprised at the number of tunes I knew such as “Grapevine Fires”, “I Will Possess Your Heart”, “Crooked Teeth”, “Soul Meets Body” and “You Are a Tourist”, which all sounded great, but after the passionate set put on in the Red Shores tent by July Talk, this seemed like a comedown of sorts.  Ben Gibbard’s floaty electro folk pop was pretty and atmospheric, but it served to be more of a palate cleanser than a main course.   We just sat back on the grass and allowed the music to wash over us, it was there, but failed to ignite a spark for me personally, but there were a few in the crowd who were head over heels for Washington’s Death Cab for Cutie.   As the band wrapped their set up, it was time to make the trek back to the Red Shores Stage to catch Kardinal Offishall. 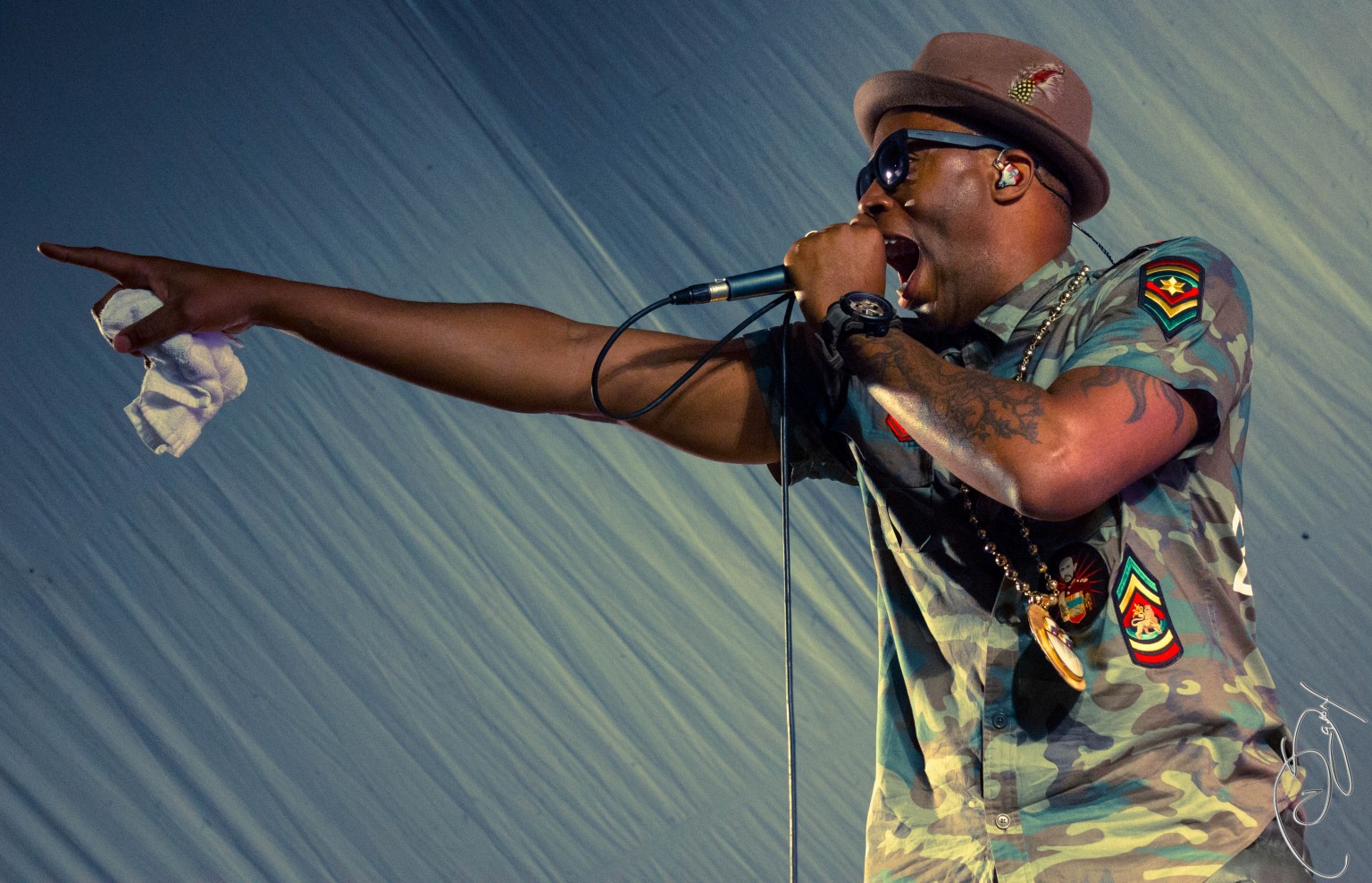 Kardi may have been scribbling notes during the July Talk set on to top July Talk’s high octane set, because he burst through the curtains and ended up barreling down the Photographers alley (running over yours truly in the process) en route to the stage.  DJ Doc had the crowd primed and ready and then Kardinal hit the stage and proceeded to blow the roof off of the joint.  It didn’t take long for the crowd to flood in and pack the house and the mainstay of the T-Dot hip-hop scene had them eating out of the palm of his hand.  He was there to party and it showed, grinning ear to ear he had the crowd jumping, fist pumping and swaying in union, at times it appeared Kardi was leading an aerobics class rather than a hip-hop crowd.  We left the tent, caught our breath and collectively agreed that next time Kardinal played Halifax, we’ll be there with bells on.  It was bittersweet leaving before the set closed out, but we had to ensure we got a decent vantage point for the evening’s headliners in the Killers. 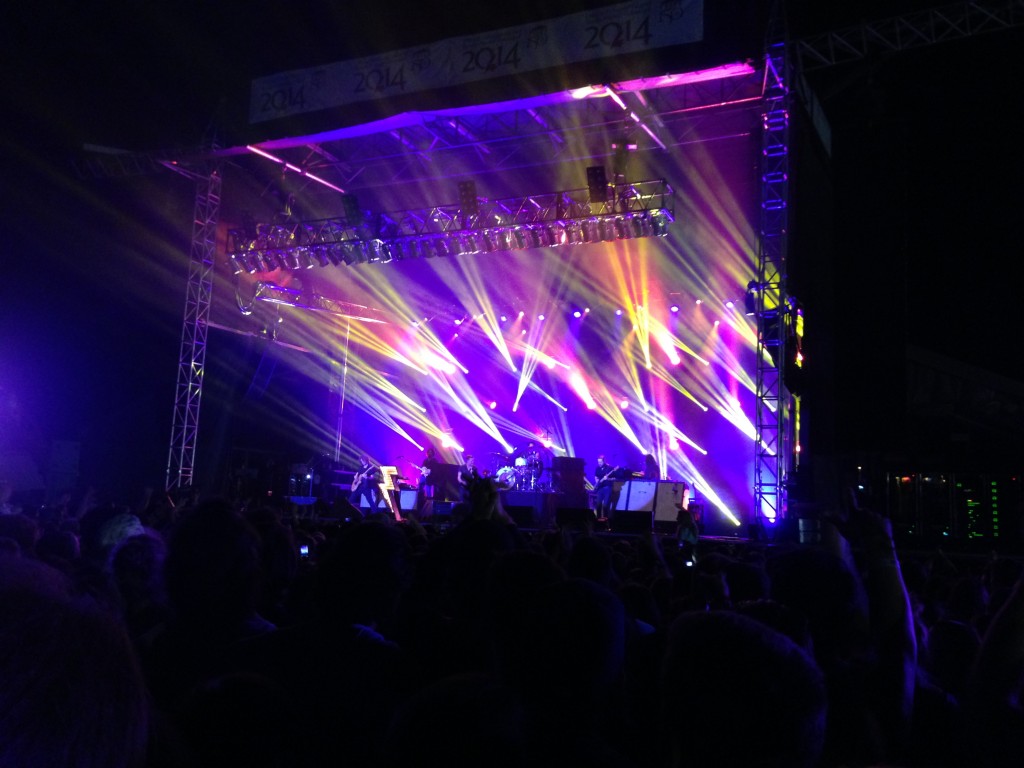 This was my 2nd Killers show as my wife and I caught the band in Montreal on their Sam’s Town tour way back in 2007 (which was a great show – but it felt a bit colour-by-numbers).  Personally from the moment the band hit the stage this past Saturday (following “Blitzkrieg Bop”, which served as an homage to the late Tommy Ramone) and tore into “Mr. Brightside”, the crowd in attendance was going to be in for a special night.  In stark contrast to the 2007 show, Mr. Flowers appeared to be in a great mood, bantering with the crowd and incited a number of different crowd pleasing singalongs throughout the night.  It was a set crafted for new and old fans alike, as it covered material spanning the band’s entire catalogue from Hot Fuss through Battle Born, it was a set comprised primarily from the band’s vast collection of singles “Somebody Told Me”, “For Reasons Unknown”, “Runaways” and “Human” all made the cut.  The band dedicated the crowd’s cover choice of CCR’s “Bad Moon Rising” to the Super Moon which was plainly visible on this perfect summer evening .   The band churned through their hit singles in an hour and a bit, and took a brief breather in the back before coming back out to churn through another 3 tunes, ultimately closing the Big Red Music Festival with “When You Were Young” which sent the crowd away happy.

All in all, my abbreviated taste of the Big Red Music Festival was largely positive and I had a great time hanging out with fellow HAFILAXer Justin Roy, but aside from the overlapping set times, and awkwardness of accessing the second stage, the day went off without a hitch.  The bands were great, the crowd was respectful and managed to make a rather large festival seem rather intimate.  I have been to Charlottetown for previous iterations of The Festival of Lights and they weren’t nearly as comfortable as Big Red Music Festival, it’s certainly one which has set a rather impressive bar for the Maritimes in terms of the caliber of acts they were able to secure for a great two part summer music festival.  Now if we could only get a week long fest established in the same vein as the Ottawa Bluesfest which has consistently assembled a mind boggling line up of acts, I can’t wait for Big Red 2015!