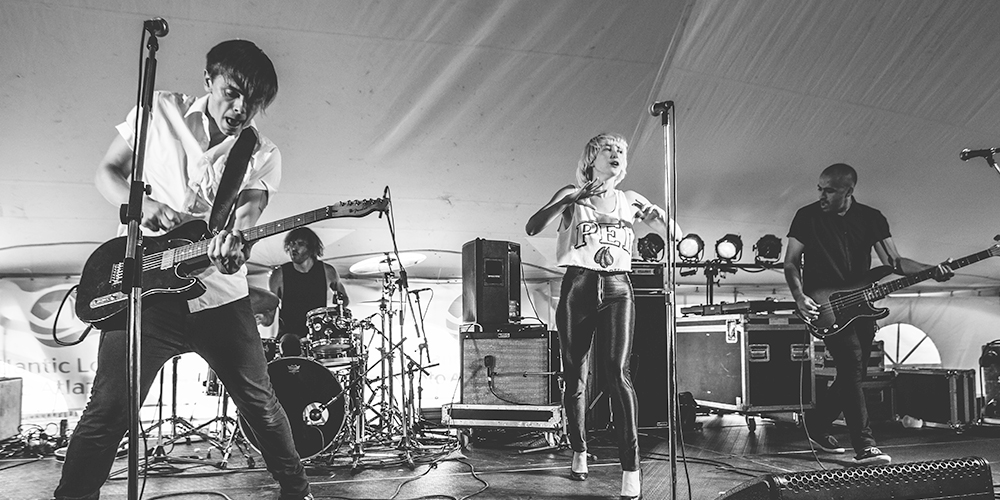 I would like to start off by saying that the city of Charlottetown is quickly becoming the go to place for music festivals. By location, it’s an easy trip to make for a lot of music goers as it is one of the most centralized spots in the Maritimes. Also, the city itself, is quite attractive, there’s many bars & restaurants downtown, it doesn’t take too long to get around by car or by foot. Booking a place to stay overnight, even at the last minute isn’t impossible (mind you, that’s what I did to book my way to this festival). There’s a nice spot for an outdoor venue, and the indoor ones have their very own character. There’s also this nice cultural vibe that welcomes these such events to the city.

In the past few month, I have ventured up from Halifax on 3 separate occasions to catch East Coast Music Week in April, Big Red Music Festival in June for the Sam Roberts & Hey Rosetta!, and the headliner for the recent Big Red Music Festival, the Killers, just last weekend. And I must say that each trip that I went up, has been a great experience for the music.

The festival over the past weekend was divided up between two stages, one being the main stage which was made up of mostly indie rock/hard rock bands, and the other being the Red Shores stage (side stage) which featured a mix of alternative rock & hip hop acts. Not only was there a divide in artists, but the overall experience in which each of the stages shared was a complete contrast to one another. From my experience, the main stage housed a very conservative vibe, while the side stage was full of charisma. I’ll dig deep further as I progress through the review. 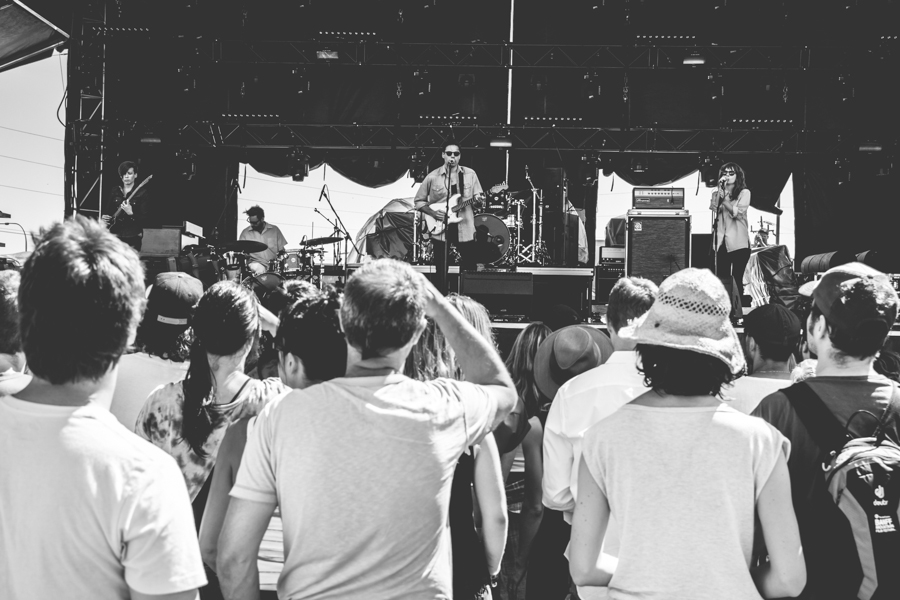 Playing on the main stage, kicking off the festival was Bahamas. The solo project of Toronto-based guitarist Afie Jurvanen who has shared the stage with both Wilco and Feist in the past, put on a pretty mellow set of songs. His music was soulful, and really mesmerized the crowd in front. Though I dare say to the people in the back, lounging all comfortably in their lawn chair would have probably put them in a coma. But the lead singer was enough to entertain them.

It was good to see that coming into Big Red Fest this time around, there was a fair sized audience as a oppose to the last festival the promotion had put on. I remember showing up to see Colour Code open the festival, and I was literally thinking to myself, “this is not right”, as they had put on a great show, but no one was there to see them play. 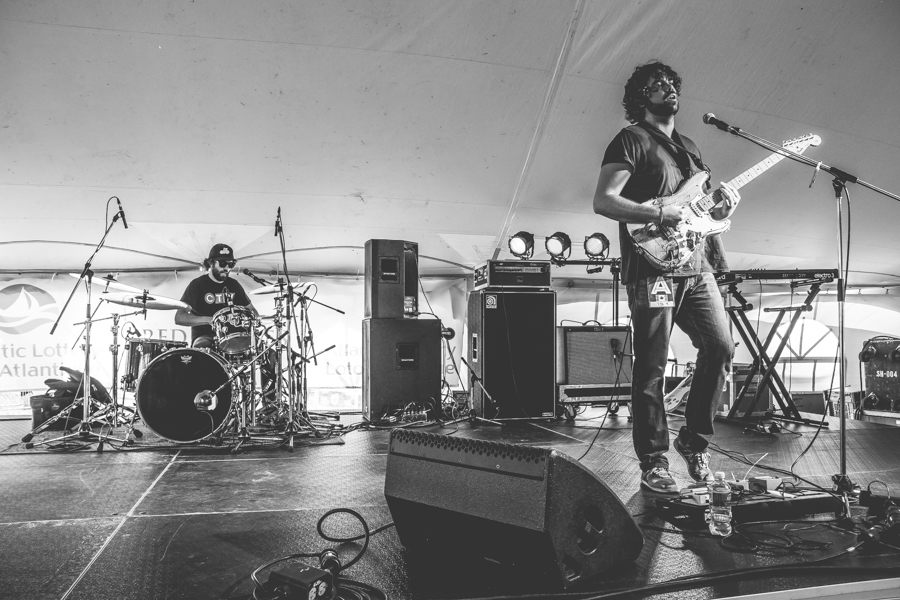 Next up on the schedule, was Halifax’s The Town Heroes, happening over on the newly designed side stage, which was enclosed by a giant tent and was set-up for only people over the age of 19 aka “the drinkers”. If the last band left you sleepy, before coming over to this stage, The Town Heroes consisting of Mike Ryan & Bruce Gillis would have easily woke you up. They played a pretty solid show of alternative rock, and sounded quite good. The riffs on their latest single, “Berlin Wall” were pretty bad ass, as they were heard through the tent.

While the acoustics were sounding flat for the most part of the day, depending on where you were standing near the main stage, the sound coming in the side stage, within the tent, was very lively. This must have been taking into consideration while booking which artists, and where they were going to play. 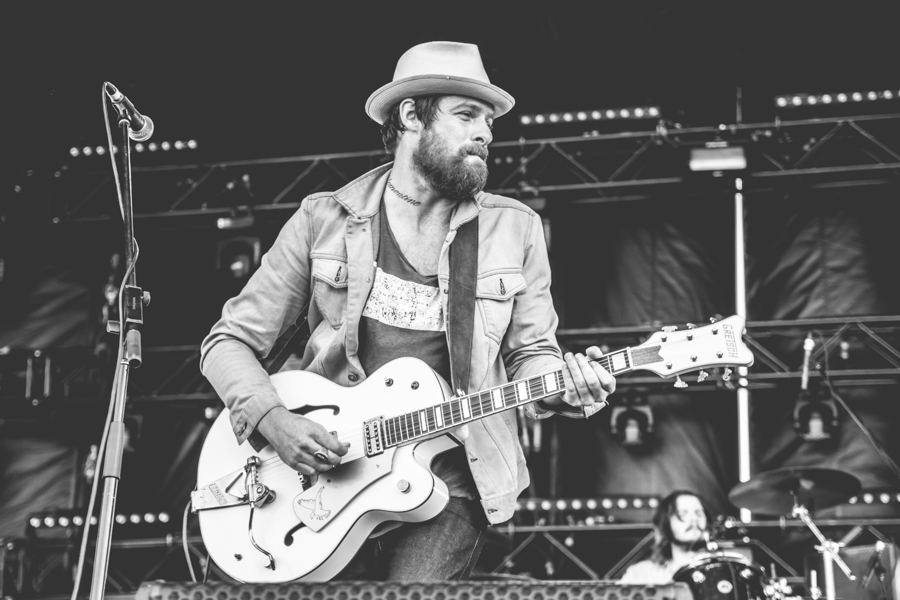 As for the next artist that hit the main stage, Matt Mays‘ set sounded really good. One of my highlights of the day, you could literally set them up with the cheapest of gear, and they would still perform, and sound good. Matt Mays’ and his band played alot of their hits including, “Take It On The Faith”, & “City Of Lakes”. Just a pleasure to watch over & over again. 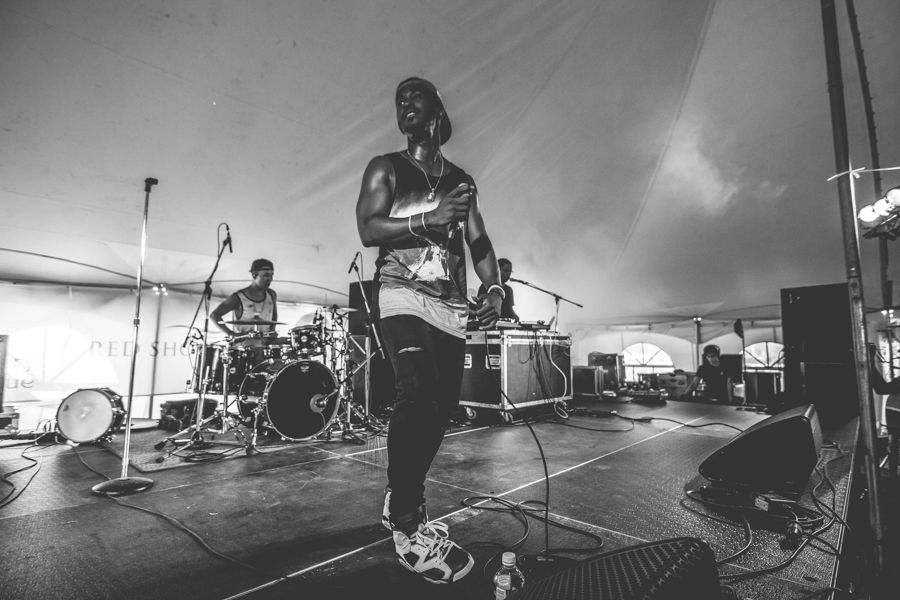 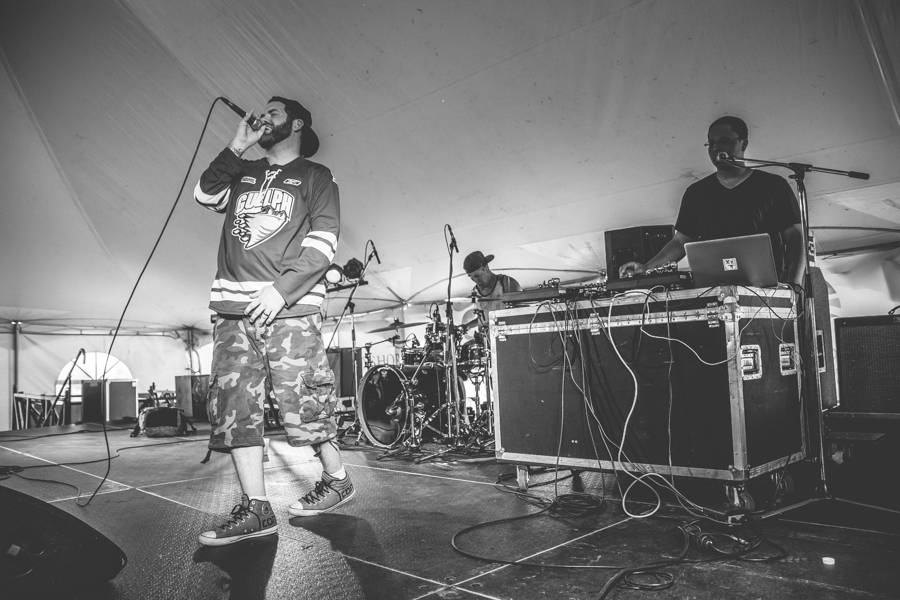 Back over at the side stage, sharing the same back-up were two hip-hop artists, playing one after another was Kayo & Mic Boyd. Kayo was up first, and he practically nailed it, one of my favorite performances of the day, Kayo showed a lot of charisma, and lit up the crowd. As for Mic Boyd, his flavor of hip-hop very uplifting, was a lot of fun as more people poured in to see his performance. I haven’t previously heard of these two artists before, but will be checking out their material after this review is done, and posted up. 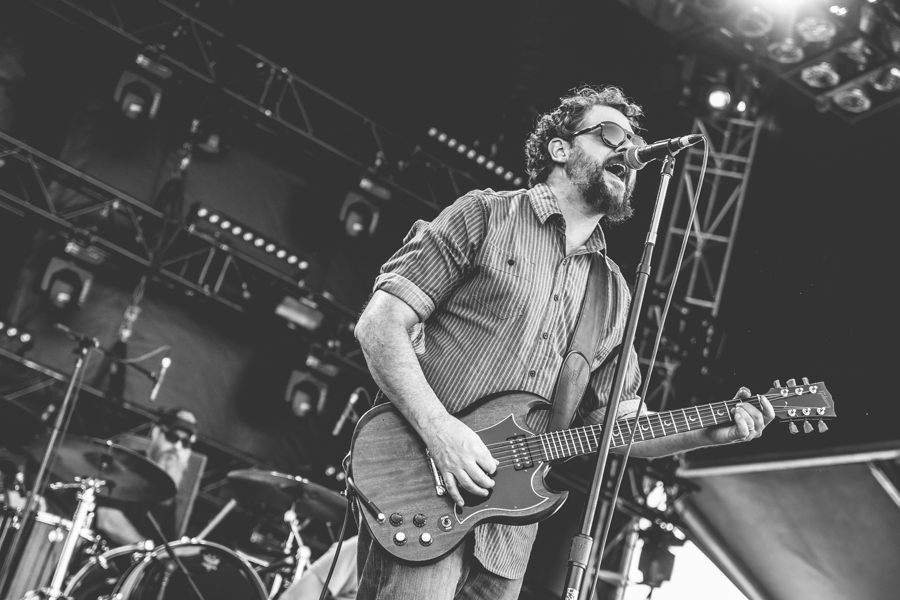 On to the main stage, the Drive By Truckers played what appeared to be folk rock set, but didn’t quite catch them as the Mic Boyd set had overlapped. Sometimes that is the case, where there are more than one stage, it’s just too bad that I didn’t get to really hear them out, through a full set. Maybe if I wasn’t a little preoccupied with previous one, I would have had the chance to see them. Maybe next time… 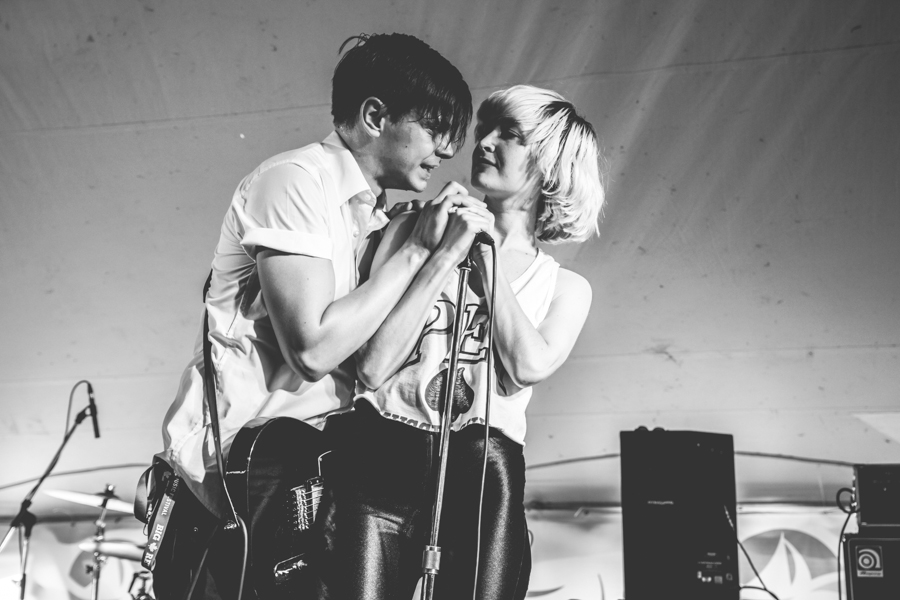 Next up, happening at the tent, was the bluesy punk-rock band, July Talk. And holy f**k, what a show this was. I’ve previously seen them play at their show at Alderney Landing, when they played during the Canada Day festival. But when I saw them, I was only watching them in the far back of the crowd. But this time I was up close, and they were practically playing in my face. If you ever go to see a band like this, do yourself a favor, and make sure you are in the front row. What a difference it makes, as this band likes to play an intimate show with their fans.

As I’ve mentioned before, the bands that played on the side stage had a lot of charisma, and this band was definitely no exception. Peter Dreimanis was just given er’ on the guitar, and vocalist Leah Fay was playfully showing her prowess on stage. This band literally rocked the house. I love to get blown away by rock shows, and this is one I’ll more than likely remember. 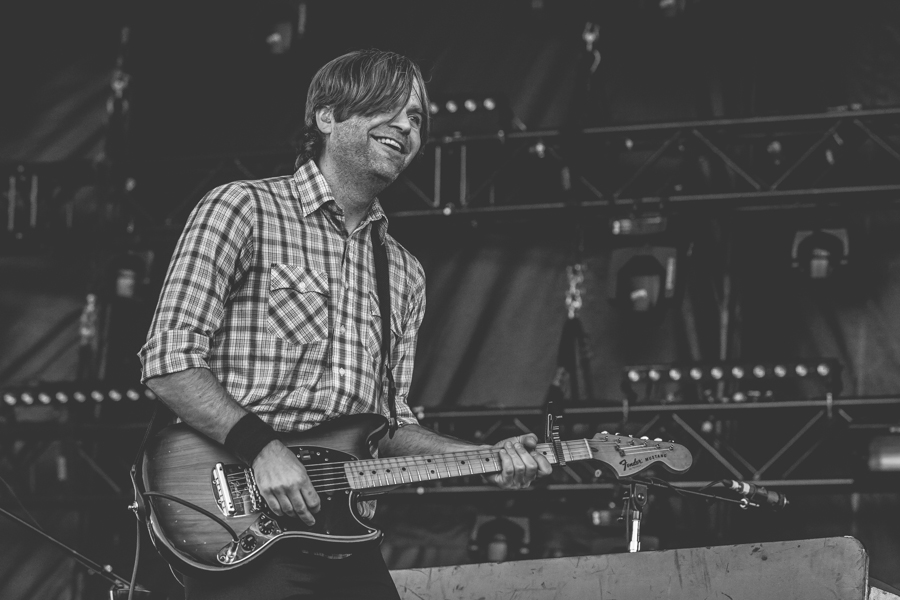 So, how do you top the show July Talk performed? Well you can’t, by bringing in Death Cab For Cutie to the main stage. I’ll admit, during the first couple songs, I was literally bored to tears. But when I sat back down, to just chill and watch the show, something musically special had happened. I was glued listening to this band play, and somehow they happened to be the most enjoyable band I had listened to during the day. I don’t have any of their music on my ipod, but the songs sounded familiar, and now I’m on an adventure to track some of the songs to download. Funny how seeing a band live does this to you. 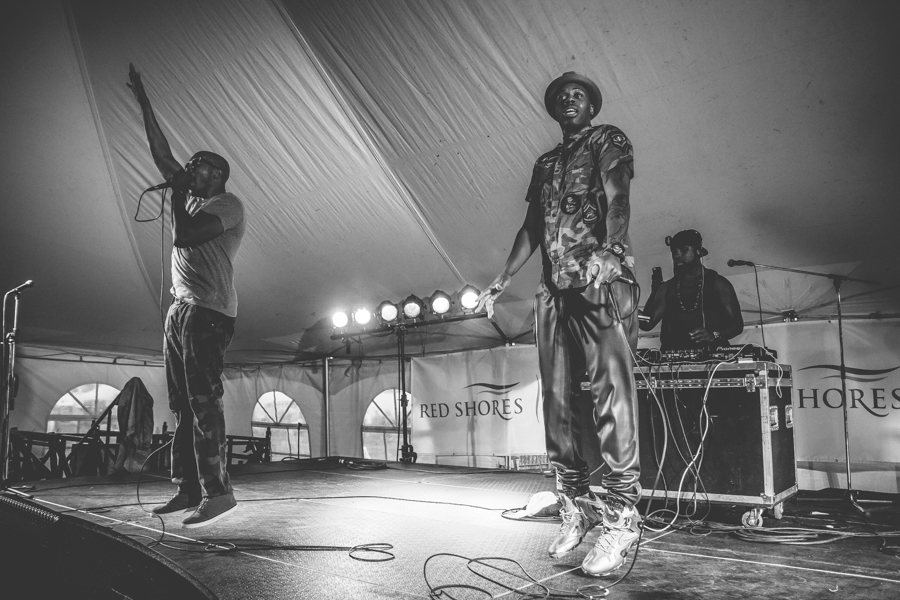 Last artist to play at the side stage was Kardinal Offishall, you’ll remember him from pioneering the hip-hop scene in Canada during the 90’s. I’ll remember him from running out, and totally ripping it up on stage. This dude is old, but only by age, and man does this guy know how to jump, dance and entertain the crowd. He played a mix of older, and newer tunes, including some of his favorite hit like “Dangerous”. The crowd that night sure got into a frenzy seeing him, and the rest of his crew play. 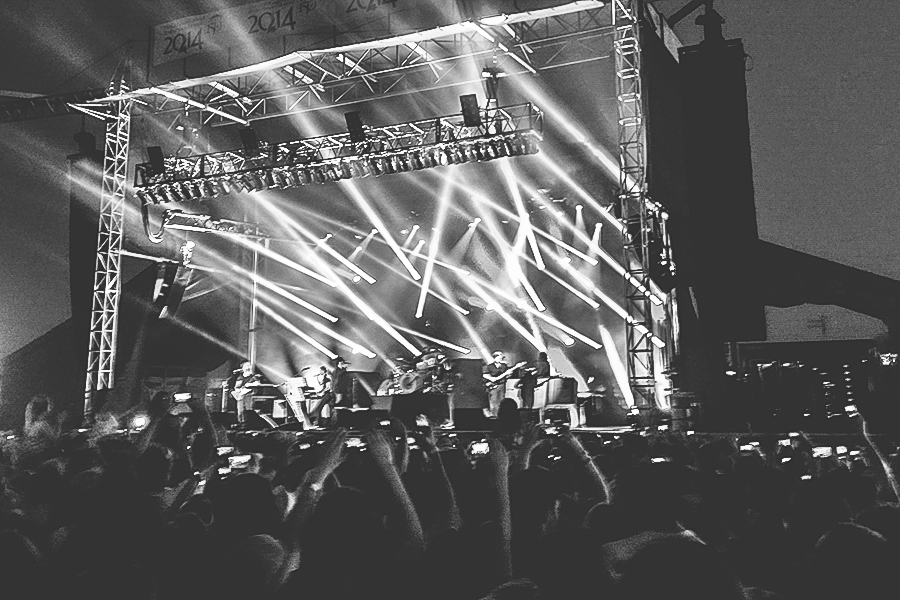 The Killers (sorry, my camera phone, the band already has their own photographer).

Onto the headliner of the night, The Killers were welcomed by a warm crowd of fans. It came quite apparent, that even though we had a stellar line-up of artist that had played before they came on stage, this was the band that the majority of people planned to see. They opened up with “Mr. Brightside”, which to me, didn’t quite capture the energy of the original recording of the song both vocally, and instrumentally. Maybe they needed to warm-up, but by the time the song “Smile Like You Mean It” hit, they were in total full-swing. Which I might add, they had totally rocked it. I’m so glad they dipped through most of their library off their breakout album, “Hot Fuss”. When the song “Human” came on, people in the crowd were having a good old time, singing along.

Half way through the set, they gave their fans the choice of cover to play, and of course, who wouldn’t want to hear a cover of CCR’s “Bad Moon Rising”. And also, somewhere half way through their set, they broke out into a killer (no pun intended), guitar and drum solo, curiosity of Dave Keuning & Ronnie Vannucci, Jr. respectively.

From there, they played alot of their rock ballads, including “Read My Mind”, which for me was their best song of the night. I told this to my friends, that this was the moment of their set-list that really fulfilled my 80’s rock fantasy. Even though they’re a band that got their start in the 2000’s, they were able to capture that magic, that we haven’t seen in a rock bands for awhile, minus the fireworks & light show. People were holding up lighters, and in the modern sense cell phone camera lights.

By the time their encore came, the crowds were chanting their name to come out. I was hoping they’d play, “Jenny Was A Friend Of Mine” & “When You Were Young”, and that’s exactly what they played. Awesome way to end out the night. For awhile these guys have been hiding in the shadows of their former fame. But after the show, this kind of made me more of a fan of them than before.

Initially, I didn’t think much of Big Red’s July 12th lineup, I could have lived without it. After being there to experience the entire show, and the line-up of bands, this is up there with one of the best shows I’ve seen this year, If not the best. I’m looking forward to next year, cause I think we have a winning combination of host city and a fantastic music festival.