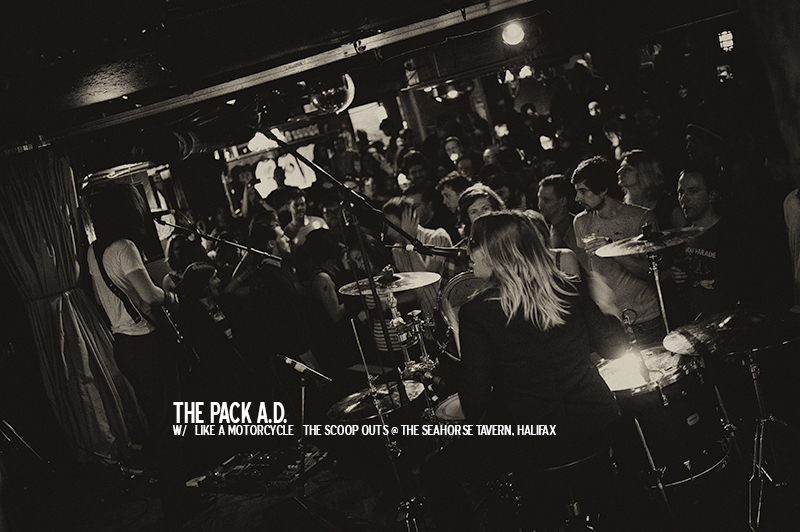 It was a pretty awesome show, with a line-up of bands playing at the Seahorse Tavern, Saturday night. Opening up the night were The Scoop Outs, who are a local band that I’ve been meaning to check out for awhile, and finally did! I really enjoy their style of music, they brought out this vibe of feel-good punk rock which me, and the crowd really enjoyed. I’d really like to see who else they play with, cause I think they’d be a key player in Halifax’s punk-rock scene. I look forward to seeing these guys again.

The next band that played, Like A Motorcycle who I’ve seen for the… 1, 2, 3, 4th time. All of which have been solid performances. I’m really starting to see a consistency with their sound, which I think is a good thing. They opened up their first few set of songs, with a couple songs from the latest EP, “Stay Single” which I enjoy, and sounded great live. The new songs they played, “Georgia” & “Slipping Away” are raw & aggressive, and they coincide with the energy, and angst this band has in their live performances. To me, this band has developed their own style, that stands out as being unique, and a recognizable Like A Motorcycle sound. I just can’t wait until they pool together their music, to release a full-LP. You know it’s coming.

The main event of the evening was The Pack A.D. Which, before I talk about, the two bands Like A Motorcycle & The Pack A.D. compliment each other very nicely. Think of them as a box of Nerds, they both have their own delicious crunchy flavour, and you really can’t separate these two bands. The Pack A.D. opened up with my favourite song from their new album, “Do Not Engage”, the song “The Water”. I really love how they can just come out, and turn it up at full blast of energy, loud & presence. And it is so effortless, like it’s been with them, and instilled in them since the beginning of time. They played a good selection of songs from their latest and past album releases. I really enjoyed “Big Shot”, and “Rocket” from the new album. And of course “Haunt You” from Unpersons. After the show, I’ve been thinking, I really gotta start going through their older album library now, apparently I’m missing out on some good tunes by them.

Oh and yes, the title of the post did promise photos so head on over and check them out on my flickr site by clicking over here.