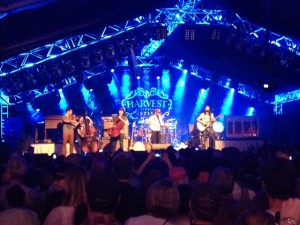 By the time I found out that The Avett Brothers were playing at the Harvest Jazz & Blues Festival last year in Fredericton, too much time had passed and I had missed out on the opportunity to pick up a ticket.  Beaten down with the knowledge that 2000 people were going to enjoy a show that I had only wished would come this way (I never really thought that the Avetts would come close to the Maritimes) I poured a glass of scotch, grabbed my headphones (it’s what I do) and drowned my sorrows away in the the Emotionalism album.

Spin the clocks ahead a year and sure enough the Avetts are coming back to town.  This time around I would not be denied.  With my credit card in one hand and the other at the keyboard, I was swift and precise in purchasing tickets for their second go around at the Harvest Jazz & Blues Festival.  All that would be left to do now is to make sure I’m in the car and on the road before they would take the stage.

Armed  to the teeth with their usual lineup of guitars, banjos and that North Carolina drawl, The Avett Brothers hit the stage to a rousing applause.  Kicking off the show with “Shame”  allowed the rabid Avett fans to chew on a non-commercial track, while also helping to set the tone for the remainder of the evening.  Next on the setlist was their current hit “Live and Die”.  The song was performed flawlessly and allowed those not familiar with the band to join in on the fun which was blasting from the stage.  From this point on the show would prove to be a roller-coaster affair as the band bounced between  foot stomping hits and laid back lullabies.

“Down With The Shine”, “Go To Sleep”, “Kick Drum Heart” and “Life” were perfect examples of how this pop driven bluegrass band is able to create songs that appeal to both the die hard fans and the masses while maintaining their southern spirit.  But it was the ballads that stole the show.

The first one to be played, which grabbed the entire audience (and my absolute favourite Avett song) was “The Ballad of Love & Hate”.  Stepping to the mic to fulfill his time in the spotlight, younger brother Seth sang this song with a calm and smoothing grace which sounded completely genuine and sincere.  (it’s funny how music hits people differently.  I have no explanation as into why I love this song so much as it was most definitely the highlight of the show for me).

Adorned in his white v-neck tee and red trucker hat, older Avett Scott strode to the mic and blew everyone away with a chilling version of “Murder in the City”(the second ballad of the night).  Although this was not a song I was overly familiar with (and here I was thinking I was a fan) it appeared that I was in the minority.  It was one of those situations during a show where you can’t move because of the venue being completely sold out, yet at the same time there was so much power and emotion coming from the stage that you could hear a pin drop.  It was beautiful and breathtaking.

Needless to say from start to finish The Avett Brothers finger picked and harmonized their way through a show to remember.  From the very beginning they had the entire crowd both mesmerized and engaged in everything that was happening on stage.  They were able to bring out  the proper amount of energy depending on which song they were performing.  Up-tempo jams would see the brothers head bang their way all over the stage, while the ballads allowed the gents from North Carolina a chance to stand in one place while their emotions ran amok.

After a quick break the band jumped back onstage to close out the show in the only way they knew how; an old fashion hoe down followed by a fan favourite sing-a-long.  With the relationship that had been built up over the past two hours, it was only fitting that the last song of the evening would be titled “I and Love and You”.  Removing their guitars from the stage and ending with only a piano, the Avetts once again proved, in the most simplistic way, that they are an act not to be missed.