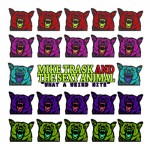 Mike Trask is one of the most prolific East Coast musicians in recent memory. He’s has recently released his most latest recording What a Weird Nite with backing band The Sexy Animal.   It’s a gritty raw album that relishes in the fact that music isn’t meant to be sanded down to a dull nub, and blues rock especially should posses somewhat grimy and almost seedy sound.  More impressive is that this album was the product of a single night at the Echo Chamber Studio recorded live from the studio floor, and the energy with which the album charges forth is intoxicating.  There is no pretense here; you can clearly hear the passion emanating from the speakers.  It is as if Trask and Co. went in with the intention of jamming and someone happened to flick the record switch and they managed to capture the magic and energy that was in the air that night.

This is not an album that is meant for analysis, it’s a record on which you drop the needle and let it wash over you.  It’s simply a fun collection of 9 tracks which give you a great impression of what to expect when you see Trask perform live.  While it may have been a Weird night, it was also a special one to boot.  This is certainly worthy of your attention.