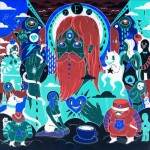 The announcement that Father John Misty was coming to play the opening night of 2012’s SummerSonic in Halifax came long before my discovery of their debut album Fear Fun. It came about from a convo I was having on twitter about the new Jack White disc Blunderbuss, and when I asked @Sonician what other stuff he was digging, he mentioned the album.

When I finally tossed it on the iPhone and gave it a spin, I was less than impressed and wondered about what exactly I was listening to. I knew he was a former member of indie darlings Fleet Foxes, but beyond that, I knew very little. In consulting Youtube and checking their videos (“Hollywood Forever Cemetery Sings” — which stars Aubrey Plaza from Parks and Rec) I was even more lost. I was coming around to the music, but it struck me as being sombre, laid back, but quite pretentious.

As it turns out my initial reaction was due in large part that I was listening to the disc all wrong (no, a bong was not involved), I was taking it as a very dry construction, when it fact it’s largely tongue in cheek (see “I’m Writing a Novel”’s reference to a Canadian Shaman). Seeing Father John Misty live really put the album in perspective and in going back to the album I was able to listen with new ears.

With new ears this album it kicked my ass. It feels like this vintage 50’s era disc, almost something that you’d expect emanating from a Quentin Tarantino film set in this desolate desert town. For my best albums of 2012, this is easily one of my favorite albums of the past year. Fear Fun has been stuck in the stereo and isn’t going anywhere soon as it’s lodged firmly in the current rotation. This is an album that manages to transcend time and yet sounds completely current.

The gems here are “Misty’s Nightmares 1&2”, “Everyman Needs a Companion” and the Beatles-esque “This is Sally Hatchet”, while subdued, still loaded with hooks and melody, but compelling nonetheless. If you’re only going to listen to one song, make it “I’m Writing a Novel”, its old timey aggressive folk sound is a good indication of what you’ll encounter when you Fear Fun. Just remember, “….that monkey may be right. And if he is, I’ll be walking him my whole life”.