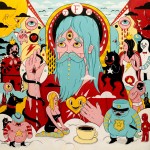 Looking for an album that you can replace that old elevator music with or maybe an album that you can throw on and lull your guests to sleep. If so, then this could be the one for you. I’m not sure what Josh Tillman was going through at the time, but from how it’s portrayed in the movies, a self induced heroin binge comes to mind. Starting off with slow, airy, space folk feel, Fear Fun very rarely moves to far away from that formula. With the exception of I’m Writing A Novel, Well, You Can Do It Without Me and Only Son of the Ladiesman, Fear Fun seems to wallow in it’s own self loathing and pity. The high point of the album has to be the harmonies which are thrown throughout the entire album. Dipping into his inner Brian Wilson, Tillman has the ability to brighten up, but doesn’t seem to really want to. Simply put, this album would be best served as background music for that rainy day, right after your girlfriend/boyfriend ripped the heart right out of your chest and crushed it in front of you.