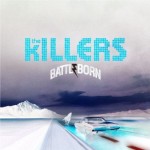 My relationship with The Killers has always been somewhat tumultuous, every album (yes even Sam’s Town) has always started out in a place of the utmost contempt, as I feel Brandon Flowers and Co. always strive to record these grandiose albums that always feel too large in scope. I felt that way with everything post Hot Fuss, I remember reviewing Sam’s Town and hating it, but slowly the album reeled me in with its dusty odes to The Killers’ hometown of Las Vegas.

Battle Born started out the very same way; with utter contempt due to the face that once again the band was making a run at that large sweeping opus of an album. As with every Killers album before it, somewhere around the 3rd or 4th run through, it starts to reveal itself. “Heart of a Girl” bears a distinct “Angel of Harlem” vibe, but “The Rising Tide” feels very much like a classic Cars tune and “From Here on Out” is distinctly Tom Petty-ish (and is one of the pure Gems here). Battle Born feels almost like the 8-bit Killers record, as the majority of the album plays like an homage to the 80’s from the aforementioned tracks, to the Synth-Pop open to “Flesh and Bone”.

I’m not completely sold on Battle Born quite yet, as I don’t feel the album as a whole is as solid as the lead single “Runaways” which bears that distinct Killers sound. It is most definitely an organic evolution of their sound, as you can hear elements of Hot Fuss, Sam’s Town and Day & Age loud and clear, but it’s not mired in the past (other than their love of 80’s pop-rock / new wave). It’s a decent album, but it’s not the pinnacle of their career by any means.