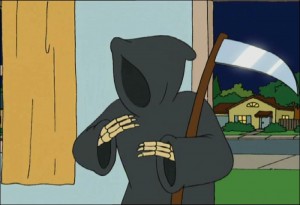 I apologize, that after I set a schedule in place, I miss my posting deadline by two days – but better late than never I guess. I’ll have to work on my punctuality.

Day 24 is something of a tough question, one that I’ve mulled over for a few days nowandhavecome to the conclusion that this may be the hardest question on the list, as it carries so much more weight. The only question that would be harder would be: “If you could listen to one last song before music ceases to exist, what would it be”, and even then you’re only tied to your preferences and not those of your loved ones and what they may take away from your final kick at the jukebox.

Would I want something that represents my religious philosophy like “Brighter Hell” by The Watchmen, or something sappy like “Just Breathe” or “Off He Goes” by Pearl Jam? Even they only say so much. I think it boils down to the fact that people realize I’m not your most formal guy(and that may be understating things), so while it sucks that you’re gonna have to attend my funeral, might as well give you something good to listen to and try not to bum you out too much. So the song that I’d want played at my funeral would be the incomparable Neil Young’s “Don’t Let It Bring You Down”. It’s not necessarily upbeat, but it’s not at all dour. It hits a nice midpoint between the two extremes.