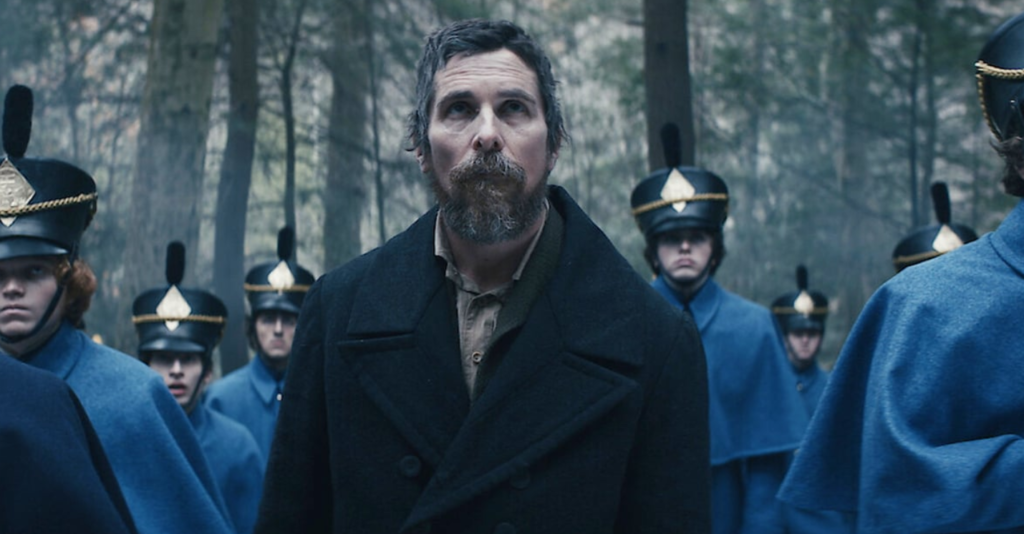 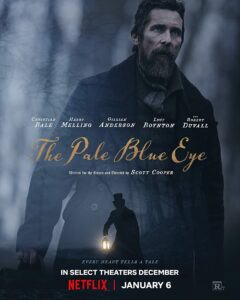 Scott Cooper is a director of gritty genre pictures. Some, like the western, Hostiles, deliver a potent brew of desperate characters in an unforgiving setting, while others, like the gangster drama Black Mass, have missed the mark. This effort is one of the stronger in his catalogue, a somewhat gruesome, gothic murder mystery laced with a dollop of literariness, what with the presence of one EA Poe. And that’s not to say you need to know the difference between Dameron and Edgar Allen to get engaged in this picture, but it can’t hurt.

We’re in the Hudson River Valley in the bleak winter of 1830, where former police detective Augustus Landor (Christian Bale at his most whiskery) is living in a cottage, his daughter having abandoned him, his wife dead. 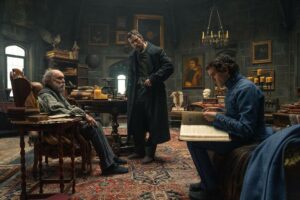 He’s summed to nearby West Point military college to investigate the death of a cadet by hanging, though the real mystery is that the fellow’s heart was cut out of his chest post-mortem. Landor recruits one of the cadets he meets at a bar, the poet and oddball named Poe — played by Harry Melling, best known as a child actor and Dudley Dursley in the Harry Potter movies. Poe will be Landor’s man on the inside, to find out who might’ve had connections with the dead, heartless lad. Together, they reveal a raven-black underbelly to all this community as more cadets expire. 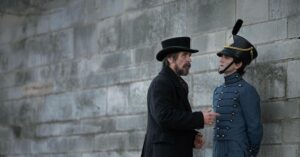 It’s hard not to notice almost all the thesps on screen are Brits — solid roles for Simon McBurney, Timothy Spall, and Toby Jones as the men in charge at the school, with smaller parts for Gillian Anderson, Harry Lawtey, and Lucy Boynton. The non-Brits Robert Duvall and Charlotte Gainsbourg are just there to service the plot, mostly, but what a plot it is. For the most part I didn’t see the twists coming, and we get a couple of doozies. 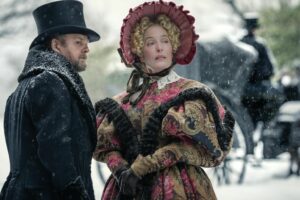 All this against oppressively gloomy environs — after a few cheesy Christmas movies, it’s good to see real snow onscreen. Full marks to the sets and costume departments — those blue cadet uniforms really pop against the granite and splashes of snow as they’re out searching for murdered boys. All of it works to create an immersive and authentically bleak sense of place and time. 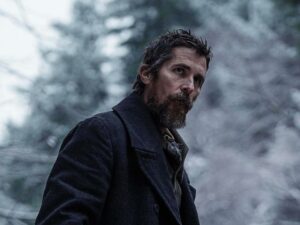 This is just the kind of material that’s been largely consigned to series television, so to see it done so well in a feature film is a pleasure. The Pale Blue Eye explores the lengths people will go when faced with bottomless wells of grief and Bale carries it effortlessly. The actor has become the King of Pain, someone who capably conveys stoic suffering. The surprise here is how good Melling is as Watson to Bale’s Sherlock. He evidences real leading-man chops.