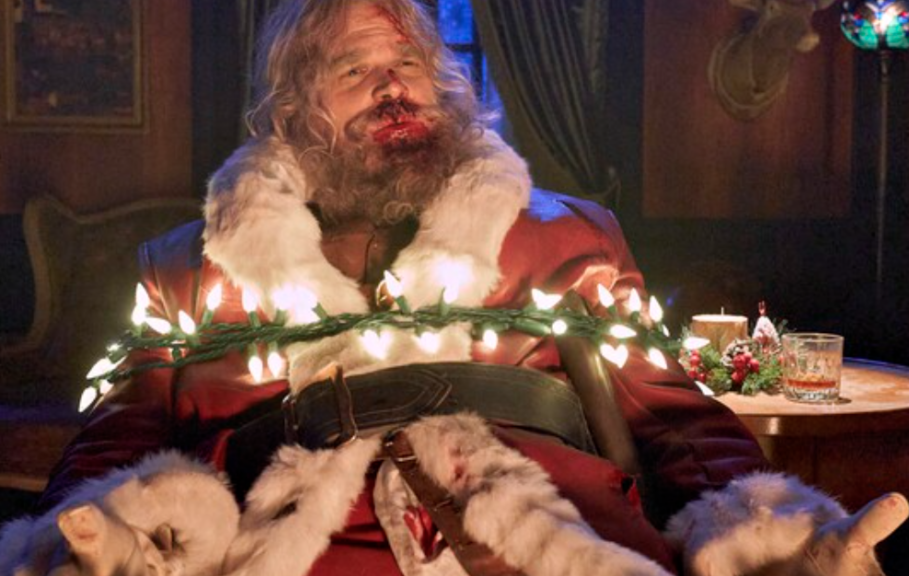 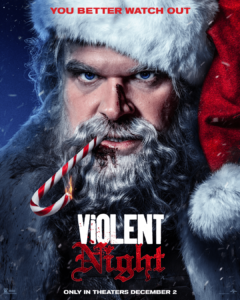 Violent Night is one of the most shoddily made movies I’ve seen in a long time, a picture so half-baked it’s amazing the filmmakers had the nerve to do it. They should count their lucky stars they got David Harbour on board, who as Santa Claus does a lot to make it half-way entertaining.

Through the movie’s many dull bits, I tried to imagine the pitch meeting that green-lit this picture, between the director and the studio representatives in some well-appointed Los Angeles office. 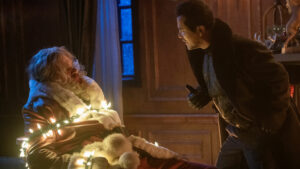 “So imagine Home Alone with a lot more action,” says the Director. “Or, you know, like Die Hard, except a Christmas movie.”

“But, Die Hard is a Christmas movie,” says Studio Rep #1. But the Violent Night Director isn’t listening, he’s too busy pitching his amalgam of a bunch of much better movies than the one he wants to make.

“So, like Die Hard, there’s a group of wealthy, unappealing people gathered together on Christmas Eve, except this time they’re a family, the Lightstones” he says, “I’ve got Alex Hassell as eldest son, Jason. He’s hunky, like  Dominic West… except less expensive.

“Jason has split from his wife, Linda. I’ve cast Alexis Louder as Linda, she was great in Copshop. This isn’t going to be nearly as meaty a role, but I hope she lifts it off the page. They’ve got a sweet as pie daughter, Trudy. She’ll be played by Leah Brady.

“All she wants for Christmas is her parents back together… but that’s not likely to happen on this terrible Christmas Eve, where she’s also gathered with her aunt, her aunt’s asshole actor boyfriend, and her awful cousin! They’re all there to visit with the matriarch, an obscenely rich business woman and cruel mother, Gertrude. I’ve got the great Beverly D’Angelo for that role!” 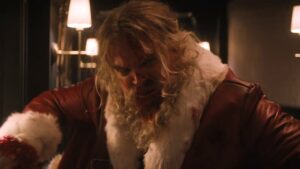 He continues: “We’ll meet Santa, too! He’ll be drunk in a bar, like Bad Santa, except he’ll actually be St Nick! He’ll be miserable from too many long Christmas Eves, too long a Naughty List, and things not going well with Mrs Claus!

“He’ll be visiting the Lightstone mansion just as a group of heavily armed thieves show up, looking to steal a pile of cash Gertrude as stashed in a massive safe in the basement! They’ll be led by John Leguizamo. His code name is Scrooge, and he’ll actually have a personal beef with Christmas!”

“Will the thieves pretend to be terrorists as they take this family hostage, like in Die Hard?” asks Studio Rep #1. “No,” says the Director. “We don’t want to confuse anyone with complicated plot points.” 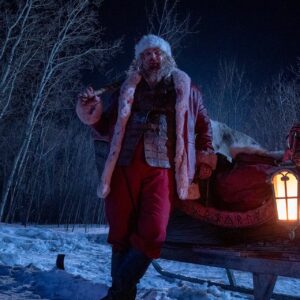 “I mean, aside from visiting billions of homes in a single night and climbing down chimneys despite being a husky guy.”

“Oh, yeah,” says the Director. “But we’re not going to get into how he got them or their limits. And in case anyone wonders, he’ll just say, ‘I don’t really understand how this works.’ That way we don’t have to bother explaining anything. This is a Christmas Action Comedy, nobody will care!

“We’re also going to establish that he was once a Viking with a huge hammer, like Thor, but different enough to not provoke the Marvel lawyers! And we won’t bother telling the audience anything around how he became Santa!” 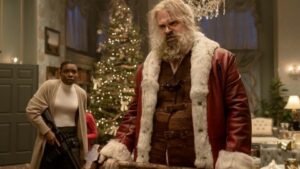 “Christmas Action Comedy!” says Studio Rep #2, with a twinkle in his eye. “Nobody will care!”

“You got it!” says the Director. “So, we find out Santa’s a badass, but for the first two-thirds of the film he’s going to hurt himself over and over again in very PG-13 ways. It’ll make him seem really pitiful. He’ll only really show his inner warrior abilities — and unleash the gore — in the final act when he’s stuck in a garden shed. It’ll be like the Tardis — it’ll look tiny from the outside, but will have tons of space inside for grinding people up with wood chippers!”

“So what will happen in those first couple of acts, while Santa is getting…uh…  hurt?” asks Studio Rep #1.

“Well, the baddies will terrorize the family, mostly,” says the Director. “Jason will get tortured, and his  finger will be mangled by the creative use of a nutcracker, but later everyone’s gonna forget about that ever happening, including Jason, whose finger will be fine.”

“But, won’t the baddies be spending most of their time trying to unlock that safe to get to the money?” asks Studio Rep #2. “Like in Die Hard?” 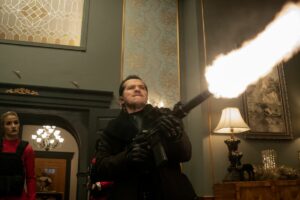 “Yeah, I guess,” says the Director. “But for for much of the movie we’re not going to care about the money too much. And neither will the audience because we’ll be keeping them waiting for all the action and gore!”

“Which doesn’t really show up until the last act?” says Studio Rep #1.

“Yup!” says the Director, with confidence. “Except kind of for that nutcracker scene.” 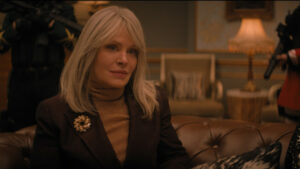 “That’s also in the last act, when Trudy fights off some of the baddies in the attic,” says the Director.

“Love it,” says Studio Rep #2. “But I need to know… before we go to the shareholders. Who is this for, really? I mean, it’s gotta be aimed at adults with all that gore and language, but Santa Claus is also a character, and his key relationship is with a little kid. That feels very All-Ages.”

The Director stares off into space for a long moment, marshalling his deepest, most profound thoughts.

“This is Rated R, for sure,” says the Director. “But we’re gonna make sure it’s broad and stupid enough that anyone will get something out of it. We’re just gonna drive through plot holes and paint over any character or directorial or continuity problem — which there may be many — with a lot of blood and viscera. This will be so easy to market because there won’t be any other teasingly offensive seasonal movie in cinemas this year! And while kids won’t be able to go see it in theatres because of the rating, I guarantee you when it shows up on streaming they won’t be able to resist!” 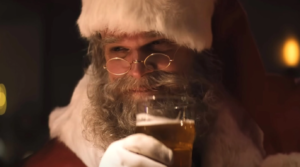