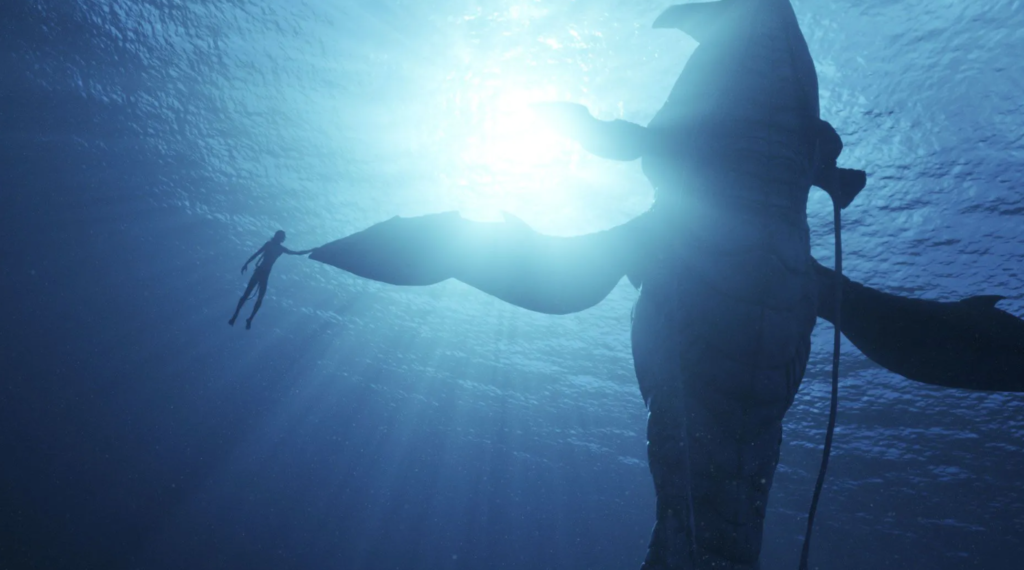 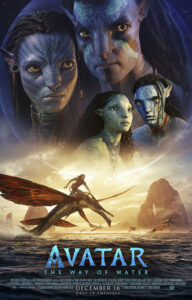 Rewatching the original Avatar last week I was reminded of Jim Cameron’s incredible ambition, impressive technical wizardry, and cluelessness when it comes to reading the room, culturally speaking.

The dude understands allegory and wants to make a statement about how we in the West are destroying our planet by tapping the resources beneath the land of other people and have been doing that for centuries. In order to tell his story he’s happy to borrow the cultural signifiers of Native American and African indigenous cultures, dressing them up in blue, alien skin. He then has his white hero pretend to be those aliens only to become their spiritual and wartime leader. With his help they’ll fight off those terrible Sky People (aka those strip-mining white Westerners). “It isn’t subtle,” as Cameron is reported to have said. 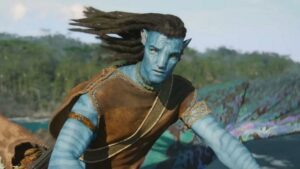 Thirteen years later it’s clear he’s both learned a lot, and learned not much at all.

Where he’s picked up some tricks is on the technical wizardry side. He’s always been on the bleeding edge of digital cinema — just go back and see how good The Abyss and Terminator 2: Judgement Day still look. And that’s not even considering his mastery of action cinema, the way he moves his camera around, the sound and visual editing. That stuff is unimpeachable.

Avatar: The Way of Water is just the next step in his continued effort to show the rest of Hollywood how all that’s done. The universe building here — from incredible underwater environments, skies a hypnotic azure dream interrupted by a regular eclipse, to the wildly creative animal denizens of this place, in the air, on land, and in the sea. It’s really amazing to watch. It’s a testament to what can be done when you’ve got all the expertise, time, and all the money. 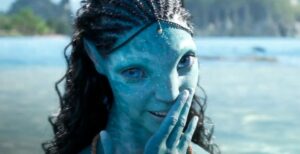 The motion capture has come leaps and bounds — especially in the expressiveness in the characters’ faces. No pun intended, but I see them now. Those actors are able to give compelling performances through the special effect, and that’s so impressive.

So, given all of that. why did I walk out of the film annoyed by it?

Because Cameron hasn’t learned anything about storytelling that doesn’t wildly appropriate other cultures for his sandbox. He’s also fond of wildly paternalistic family units, and his new adventure is so painfully hokey, even if it wasn’t so insensitive it would still irritate. 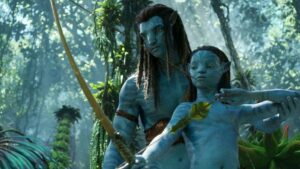 There’s also teen Kiri, adopted by the Sullys, who is somehow the daughter of the Na’vi version of Sigourney Weaver’s character from the first film. Who her father is and how that even happened is a mystery the film is happy to leave unsolved — maybe we’ll find out in the next sequel. Weaver also actually plays this hippie child, which seems a weird choice since she sounds nothing like a teenager, but whatever.

Then there’s Spider (Jack Champion), who is the most egregious retroactively added character, the son of the first movie’s villain, Quaritch (Stephen Lang). There was no sign of him the first time around, but he’s here being raised in the forest with Sully’s kids and somehow much more feral than they are, while also being a white boy with dreads. That’s never been a good look for all sorts of reasons. 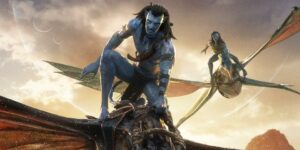 Quaritch is also back, but at least he gets a decent science-fiction reason to be. He’s cloned into the body of a Na’vi avatar, as are a bunch of his jarhead team. They return to Pandora under the command of General Ardmore (Edie Falco), who says the reason for them being there is that Earth is dying and they need to bring the indigenous Pandorians under control before the big migration.

They’re not gonna even pretend to do this with good faith as their huge ships burn up the landscape, and now-blue Quaritch and his goons hunt Sully, Neytiri, and the kids. To take the heat off the Omatikaya clan, the family leave to find a new home with a village of ocean-friendly Na’vi variants, the Metkayina clan. 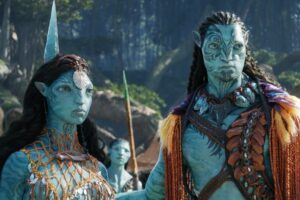 Do the human forces, and General Ardmore, keep troubling the forest Na’vi while the Sully family hide out in the Balinese-like paradise? Who knows, cuz we never see any of them again. It’s amazing how little the movie cares about certain characters, or the reason the humans were in Pandora during the first film — the search for something called unobtanium, which I guess they… obtained.

Then the movie becomes all about the children, and with their petty rivalries the adults gets shunted away. I rapidly got irritated by these terrible teens. Part of the problem is though many of them are played by white child actors, they’re putting on a variety of strange accents — none of which match, even within the Sully family. Also annoying is their insistence to use a lot of current slang — “wuss,” “sick,” and, most annoyingly, repeatedly, “bro.” 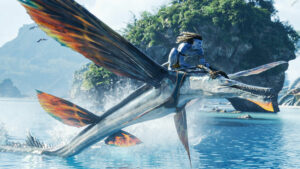 Though they’re all blue, their need to call each other “bro” at every turn makes them sound like privileged white kids pretending to be a minority ethnicity, which is more or less what Cameron wants of them.

If there’s sympathy to be had for the kids it’s that Jake Sully is a terrible father. He’s a wildly paternalistic asshole who after his kids get into a fistfight with the other clan’s dickhead offspring, he insists they go and apologize, but he’s clearly thrilled they stood up for their honour of their sister with some bloody violence. Sully’s regular refrain of, “I must protect my family,” seems cribbed from the 19th Century, not the far future. 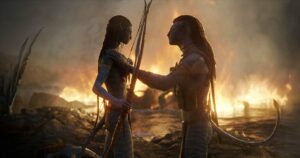 In the midst of this section of the film — the longest and most tiresome part of it  — the younger bro, No’ak, makes friends with a rogue whale, and for a deeply dull 20 or so minutes Avatar 2 threatens to become a cosmic version of Free Willy. Yes, this is a movie that caps three hours, and this is the stuff that could so easily have been cut to spare us its ridiculous, unjustified running time.

Worse than all this childishness is this sense that Cameron has taken inspiration for the sea-focused Na’vi people from Polynesian cultures, with Metkayina clan characters at one point, including one played by Kate Winslet, doing something that looks a lot like the haka, the ceremonial Maori dance. 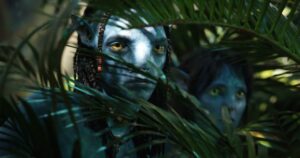 I’ve found one source that says Cameron and New Zealand members of his crew and cast, including Cliff Curtis, who has Maori roots, collaborated to purposefully apply those cultural tropes — like ornate facial tattoos — to this particular group on Pandora. I hope that’s true, because without that kind of consultation Cameron’s entire Avatar project starts to look painfully colonialist, despite the humans being the villains and the deep environmentalist themes also clearly in play. (And I’m not the first person to suggest this, especially given some of the boneheaded things Cameron’s said in the past.)

There’s a good argument to be made that rather than put more money into Cameron’s pocket, a fantasy film lover could check out any of a number of films — many of which are better than this one — made by actual indigenous filmmakers. (Here’s a solid list.) 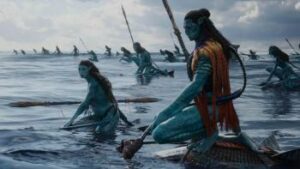 But I also can’t blame action fans, or fans of big-budget science-fiction blockbusters — fans of 3D can go to hell — who might give in to their curiosity to see this picture. The finale, during which Cameron scratches his mecha-fetish itch, his sinking big ships itch, and his submarine itch, is technically amazing. I won’t deny it. It’s too bad something so on point in one way is in service of otherwise such a deeply dumb, tiresome movie.