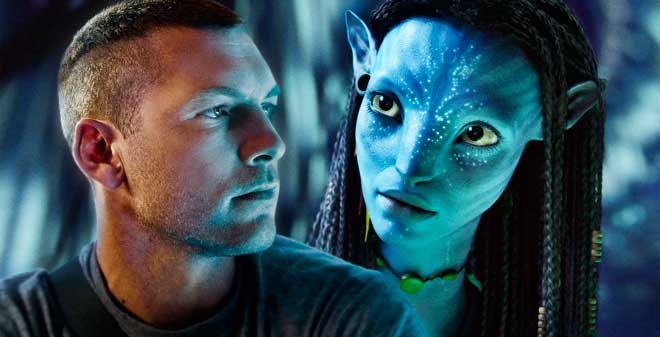 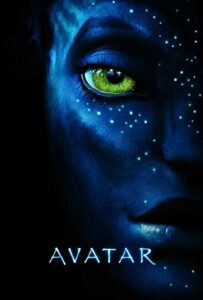 Having not seen Avatar since the week it opened in cinemas in 2009, I figured it was important to revisit the world-conquering cultural phenomenon before I bought a ticket for the much delayed sequel opening today. 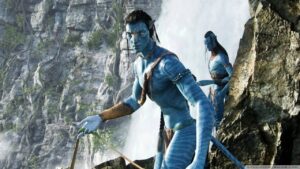 In my memory the largely CGI-animated science-fiction adventure movie had a lot of impressive visuals and not a little slam-bang action — Cameron’s knack for both cutting edge universe-building (as in The Abyss) and fetish for weaponry and war (as in Aliens and Terminator 2) paid off in a big way. It was also one of the handful of movies, before and since, where 3D was actually an effective storytelling device. 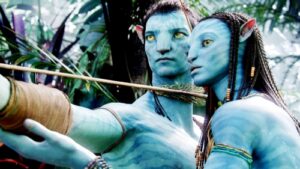 That said, a lot of people have talked about how the cultural profile of this picture has largely vanished despite its massive box office success. I’ve never understood why that’s the case with some of Cameron’s work — Aliens, Titanic and the Terminator movies continue to be reference points, True Lies less so.

Coming back to Avatar more than a decade later, some things have changed — like my perspective on problematic colonial storytelling tropes — and some things about the film have certainly held up. 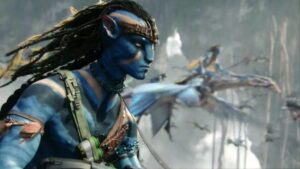 If you’re like me and have forgotten a lot of the picture’s plot, here are the broad strokes:

We’re getting the story through the eyes of Jake Sully (Sam Worthington, blandly competent), a space marine who lost the use of his legs. His brother was a scientist who died off-screen, and the company with which he had a contract asks Jake to take his place. The brother was bonded with an avatar, a grown-in-a-test-tube blue alien body, and due to their genetic similarity Jake will be able to “pilot” the avatar himself. If he signs up, the company will also cover his healthcare and make sure he gets the spinal surgery he needs. 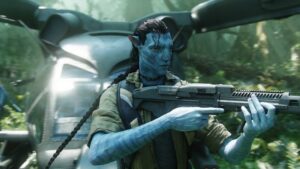 Jake’s flown to Pandora, a beautiful, fecund planet populated by those tall, blue aliens, the Na’vi. The humans are there to mine a valuable mineral MacGuffin, the ridiculously named unobtanium. Jake’s consciousness is uploaded into the avatar meant for his brother, and once he’s comfortable impersonating this species, he embeds himself amongst the Omatikaya clan of the Na’vi. They know he’s “a demon”, an outlander who walks around wearing the blue Na’vi skin, but he somehow, somewhat unbelievably, convinces them to trust him. He gets friendly with a warrior woman, Neytiri (Zoe Saldana). 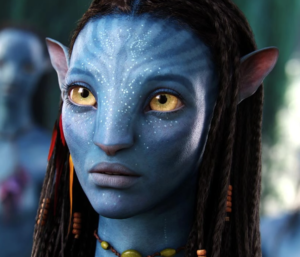 When he isn’t walking around with long, blue legs, Jake is in his own body working with the human scientists, led by Dr Grace Augustine (Sigourney Weaver), who formerly ran a school for the Na’vi, which gives their younger folks some affection for her. He’s also a spy for both military hard-ass Quaritch (Stephen Lang) and bottom-line obsessed company man, Selfridge (Giovanni Ribisi). Hanging around back at base is a cool pilot, Trudy Chacón (Michelle Rodriguez), who gets to wear aviator sunglasses and save the day once or twice. 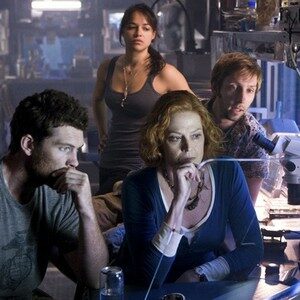 The fundamental science fiction concept here is wildly attractive, the idea of putting your consciousness in a body that has amazing physical abilities. It’s one of the reason hundreds of millions of people log onto video games every day. (Though, interestingly, the film has no interest in exploring the psychological impact of a character who was disabled finding himself in a body that can do wondrous things, nor what it means to use a physical form that was designed for his brother, the possible joy, or grief, that might be associated with that.) But if thematically this picture has things in common with gaming, structurally it doesn’t resemble any of those many failed video-game movie adaptations. It’s too well-made for that, and as a technical wizard Cameron has few peers. 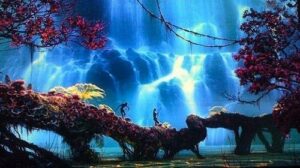 The look of the Na’vi and its world are deeply indebted to Japanese anime, with just a touch of Margaret Keane in the eyes, but it’s also impossible not to notice how much these aliens seem to share the traditional culture of Native Americans and First Nations here in Canada, what with the beads, the garments, and the bows and arrows. The casting of Cherokee actor Wes Studi as Omatikaya chief Eytukan kind of drives it home. 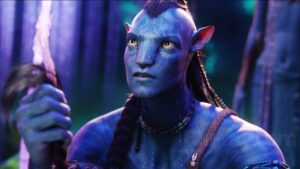 James Cameron, a white dude born in Kapuskasing, Ontario, which traditionally was Cree, Moose Cree, and Metis territory, tells a tale of a white colonizer “going native” and becoming a spiritual and military leader of indigenous people. It’s a wildly obnoxious allegory.  Add to that the whole noble savage thing, another pitfall of white settlers telling stories about indigenous cultures, alien or not. Even when done with good intention, it’s incredibly condescending. 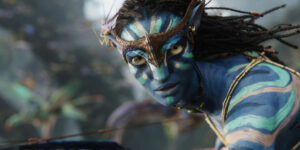 I’m sure Cameron would say that he’s using science fiction to illustrate the dirty legacy of colonialism, to promote empathy in the audience for indigenous populations whose homes and unspoiled environment are being destroyed by uncaring imperialists interested only in resource exploitation. You could read it that way, but if so why the need for a white dude to be the hero, to inspire the indigenous population to fight back? 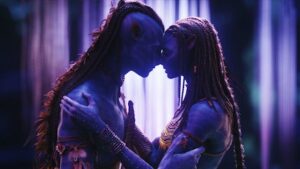 This deeply compromises all that’s good about Avatar, which is a drag since there’s a lot about it that is still good. The world of Pandora with all its fascinating critters and physics-denying features (floating mountains!) is wondrous, and its scale is immense. At least 90% of the FX looks as good as it did 13 years ago. I can understand a big part of the film’s appeal, and why it originally did so well at the box office, is that audiences just want to spend time in this fantastic world. It’s hard to deny the film’s influence on movies since, like Edge of Tomorrow and Dune.  And the climactic battle in the film’s last act still absolutely rocks. Neytiri ends up saving Sully in a key moment, which is a nice flip on what you’d expect from a movie that sets him up to be the big hero.

It’ll be interesting to see whether the sequel — and the ones following — exhibit a more self-aware approach on the issues of representation, maybe taking a hint from the producers of Frozen 2, who consulted with the Sámi in developing a fictional indigenous people for their film. I’m not holding my breath.