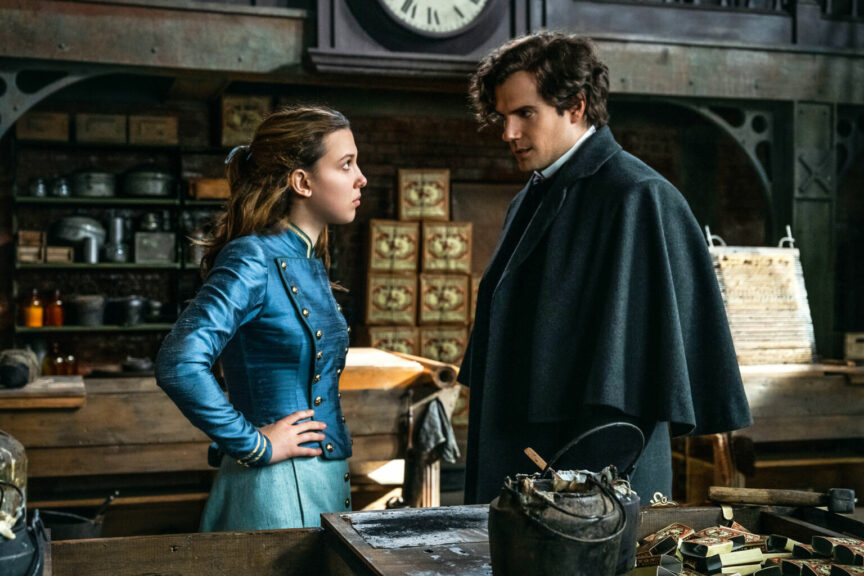 Directed by Harry Bradbeer | Written by Bradbeer and Jack Thorne, based on the series of books by Nancy Springer | 129 min | ▲▲▲△△ | Netflix 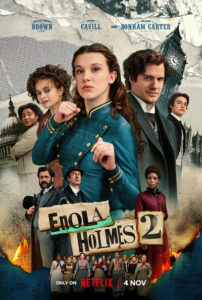 It’s a welcome return of Millie Bobby Brown as Enola Holmes, Sherlock Holmes’ non-canonical younger sister, who made quite a splash with her first appearance in a Netlfix film back in the fall of 2020. If this second entry is perhaps not quite as effervescent as the first it’s still well worth the watch. 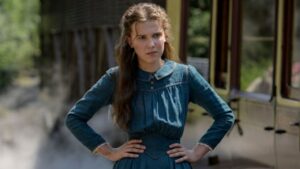 We’re back in Victorian London where Enola is flush with having solved her first case. It seems the local press has given her great detective brother (Henry Cavill) all the credit, but that hasn’t stopped her from starting her own detective agency. Unfortunately, no one is taking her seriously — that is until a girl comes to her with a case; the disappearance of her sister, a young woman who works in a match factory and a West End club. Before long Enola is on the verge of revealing a conspiracy that may or may not overlap with a case her brother is working on involving extortion and blackmail. She’s also accused of murder.

Once again we have Enola flagrantly shattering the fourth wall with her frequent, funny asides while helpful and illustrative animated and still imagery  eases the story forward and keeps things playful. We also get the return of Enola and Sherlock’s proto-feminist mother, Eudora (Helena Bonham Carter) and her lieutenant, Edith (Susan Wokoma), along with Inspector Lestrade (Adeel Akhtar) and the young Lord Tewkesbury (Louis Partridge). 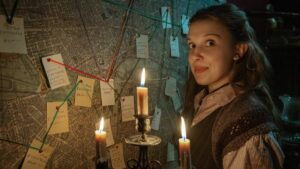 Joining the cast this time out is David Thewlis as the very squinty Detective Grail, Sharon Duncan-Brewster as Mira Troy, and Hannah Dodd as Sarah Chapman, the missing girl. 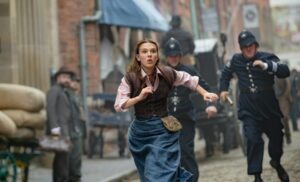 Cavill is a bit more rumpled and vulnerable than we’ve seen him, which is an improvement over the last time, but he’s still far too dashing, square-jawed, and psychologically healthy to be a plausible Sherlock Holmes. If you wanted to be mean you could add dull to that list of descriptors, but that’s not *my* style.

Further, Partridge, who had a bit of the rogue about him in the first movie, becomes the model of the unthreatening, slightly squiffy love interest for Enola, and the movie practically blurs anytime it indulges their damp romance. And while I appreciate the effort to incorporate real life events into the plot — the Matchgirls’ Strike of 1888 — especially given the strongly feminist themes embedded in this series, it’s done clumsily, shoehorned into the third act. Norma Rae this is not. 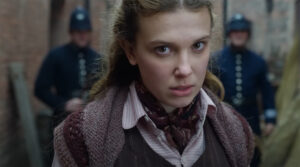 Still, the picture very much continues the lively, entertaining tone of the first. Millie Bobby Brown carries it with the kind of effortlessness that papers over many visible cracks in the film’s foundations. Last time I asked for this to become a franchise with more entries, and she’s so watchable it all but guarantees it.