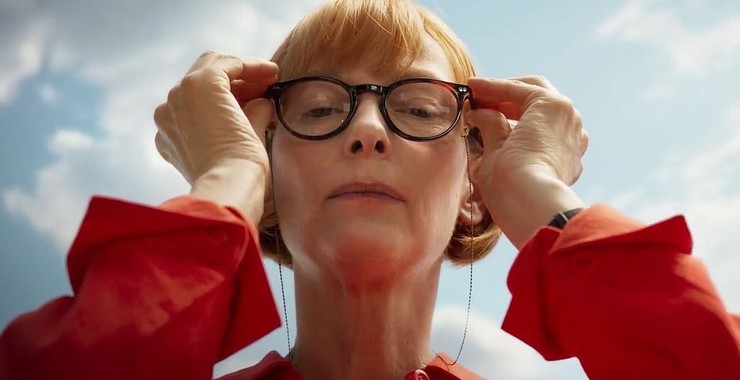 Directed by George Miller | Written by Miller and Augusta Gore, based on The Djinn in the Nightingale’s Eye by A S Byatt | 108 min | ▲▲▲△△ 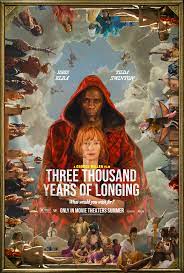 The wild critical and commercial success of Miller’s last feature, Mad Max: Fury Road, earned him plenty of rope with whatever he chose to do next, so he took his time and adapted a book about romantic myth and storytelling with his daughter (Gore), making for a lovely but strangely inert film especially in light of what preceded it. It’s not without its pleasures, as you could say of any of Miller’s films, but at times it also seems a little ill-advised. 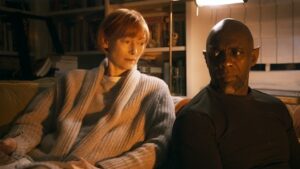 Alithea Binnie (an ageless Tilda Swinton) is a narratologist, happily single, who on a conference trip to Istanbul does what anyone would do — purchases a gorgeous, blown-glass bottle at the bazaar and, using her electric toothbrush to pry it open, releases a djinn (Idris Elba, towering over Swinton thanks to FX, he’s only five inches taller than she is in RL). She is initially and understandably skeptical of his offer of three wishes, knowing that every single story of a magical creature offering your heart’s desire ends up being a cautionary tale. She’s doing fine, what more does she need? 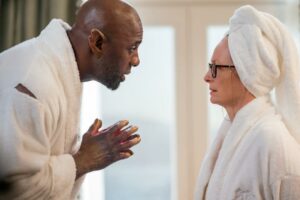 That in itself makes for a delightful conundrum — the Djinn couldn’t have found a worse emancipator — but she agrees to listen to him tell the tales of the past times he was contained in a bottle. From a hotel room with Swinton and Elba swaddled in enormous white bathrobes we flash back to the Djinn’s past in ancient kingdoms, the women he’s loved and the inevitable pain his granting wishes have caused — no fault of his, he insists. 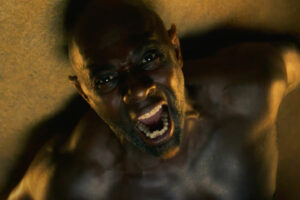 The eye candy on display here in the sets, props, and costumes is never less than a joy, even when it’s heavily doctored with CGI, both the subtle sort that gives it all a strange, unreal hue, and the distractingly hokey variety that makes portions of the picture look like they were shot in the lobby of  Vegas theme hotel. The film also trades on an Orientalism so quaint it hardly seems worth mentioning, but it’s there as part of fairytales many of us will know from childhood — this could be Aladdin or One Thousand and One Nights with the Djinn narrating the story. 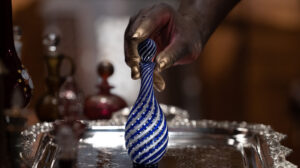 And maybe that’s the problem here — even with some eye-pleasing visual ideas and a lovely, mature romantic thread, the film too often feels like it’s telling rather than showing, like a tale overheard in a restaurant rather than one with characters you feel invested in. None of the people in the Djinn’s stories you end up feeling anything for — despite the occasional pleasing touch of sensuality — which leaves only the central pair to invest in, and the film doesn’t feel as interested in their connection as it should. 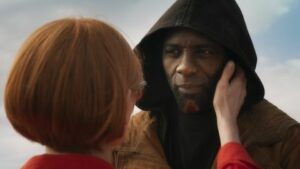 I found myself wishing the script had just a bit more playfulness, perhaps some broader humour or camp to balance notes of darkness. 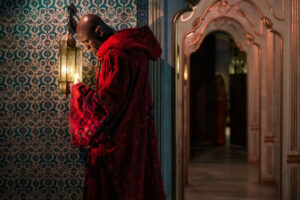 The beginning of the third act signals a sudden change to one of the characters, a change I didn’t buy for a second as it goes counter to what we’ve believed about them to that point. I think it’s asking a lot for an audience to buy it, and it dissolves what had been an essential bit of character conflict without much warning. 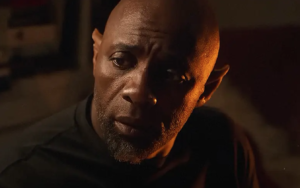 This said, I never had the sense what I was watching was anything but Miller and his collaborators’ intent — this is the movie they wanted to make. Perhaps the biggest difference between this and Fury Road is the earlier film felt like the product of a much younger filmmaker channelling an incredible gift for kinetic ballet, while this one feels like the product of a man in his 70s. He’s still full of imagination and whimsy, but maybe also just a little too stolid and austere.