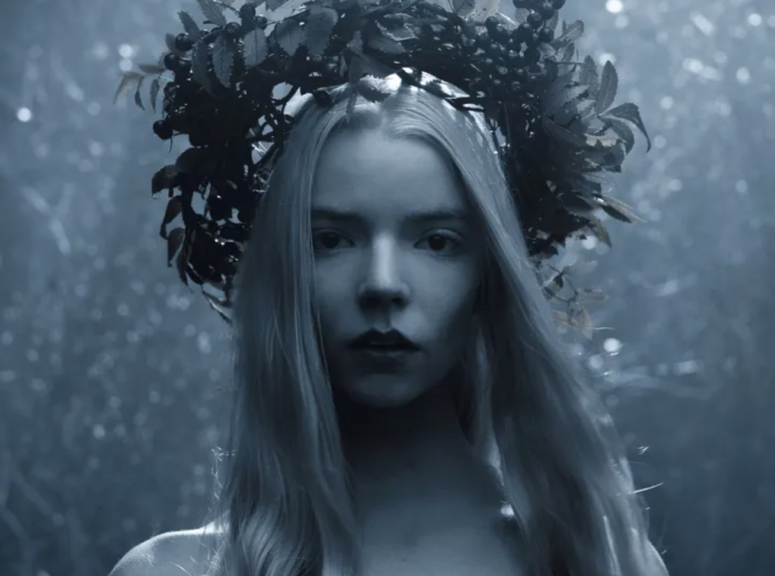 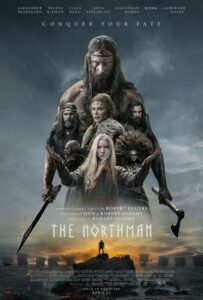 Welcome to another bleak, violent historical tale from American auteur Robert Eggers, with plenty of his now well-established horror-tinged weirdness — lots of dolly-ins and characters staring into our souls — but all at a much bigger scale.

Stories of studio notes during production haven’t diluted his intensity or visual gifts as a storyteller, or his affection for mud and bodily fluids — see his two other features, The Witch and The Lighthouse, for plenty more of that.

The Northman has all the ambition and energy of those first two, but what keeps it from being more than a just OK time at the movies is a disappointing narrative sluggishness and heavy-handed sense of its own importance. 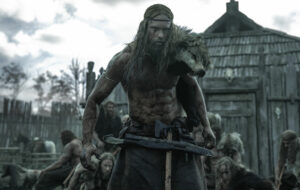 The film’s first half is as basic a revenge drama as you get, apparently lightly adapting Nordic folks tales that inspired Shakespeare’s Hamlet.

Young Amleth (Oscar Novak) is the son of a Viking chieftain, King Aurvandil War-Raven — played by the very whiskery Ethan Hawke, with Nicole Kidman as Queen Gudrún. Claes Bang is the raven-haired uncle, Fjölnir The Brotherless, who you know right away is a bad guy.

After Amleth has a bark-like-a-dog bonding ritual with his dad and the village Fool (Willem Dafoe), Fjölnir murders King Aurvandil in front of the kid and drags his mother off, screaming.

Cue the mantra: “I will avenge you, Father. I will save you, Mother. I will kill you, Fjölnir.”

All of which is fine — very much in the Conan The Barbarian mode, though without the self-aware genre trappings. There’ll be no discussion of what’s best in life, no vicarious thrill of battle — only brutality, gore, and suffering. 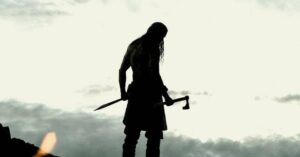 Years later and Amleth is Alexander Skarsgaard, impressively cut and part of a tribe of Berserkers who pillage and burn all in their way — we get an entirely vivid vision of their work with a tracking shot following Amleth over the wall and into the fray. He’s a hollow man, living for death and estranged from everyone around him.

When Amleth hears his uncle had his kingdom usurped and is now a farmer in Iceland, he arranges to join a group of slaves sent to the island to serve on said farm, which is where he crosses paths with the husky-voiced Olga of the Birch Forest (Anya Taylor-Joy), who is witness to Amleth’s vengeance. 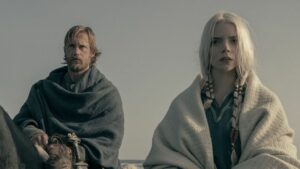 The Northman is a damn good-looking movie — Eggers has a gift with creating an immersive, authentic-feeling world that also can include psychedelic visions of ancestry, the tree of life, and hell itself.

His actors also give their all — both Skarsgaard and Bang are impressive, but in a story hinged on the anger and god-bothering missions of men, Taylor-Joy and Kidman both get two of the best scenes in the movie and raise the level around them with their performances. 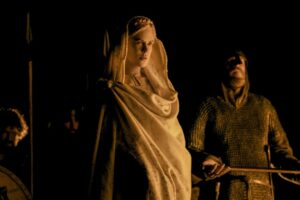 Further to that, what distinguishes this movie from many other takes on traditional myth is how it incorporates women’s experience, how they manage their own power and spirituality in the face of the chronic violence in their culture perpetuated by those hairy dudes. 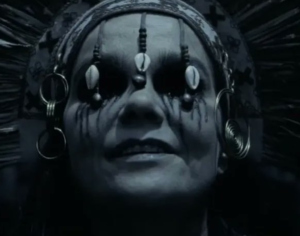 (Which reminds me, it’s great seeing Björk once again on the big screen in an uber-creepy single scene cameo rolling those delightfully Icelandic vowel sounds.)

Saying all this, why about halfway in did I idly wish I was watching the adventures of Ragnar Lothbrok in the TV series Vikings? 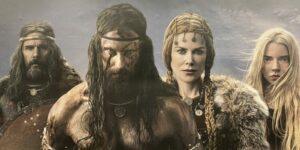 For starters it’s because The Northman is designed like a viking longship — flat through the middle with high points on both ends. Its narrative detours slow it to a crawl through an overlong second act.

Beyond that, the film’s emotional through-line zigs and zags and you start to wonder what point Eggers is making — in that it reminded me of The Green Knight, with which I had very similar issues.

Sure, his film is strange, sweeping, and supernatural, but I wonder if the filmmaker lacks the courage to really shock us the way, say, Nicolas Winding Refn has in films like Valhalla Rising, or filmmakers like Ken Russell or Paul Verhoeven who used period dramas to explore either their own perversity or make a statement about shame and western puritan hypocrisy. 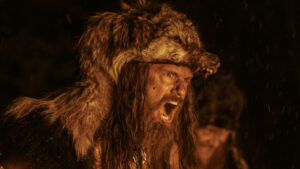 Eggers is so into his vision of authenticity and cultural myth he’s made a movie that doesn’t actually have a lot to say.

For instance, I had to think Amleth would have raped and murdered innocents during his berserker life, but we don’t see any of that — not-so subtly suggesting he’s a better kind of viking than every axe-swinging, screaming maniac around him. And the tragedy of his single-minded path of revenge is undercut by an ending that I’d argue doesn’t give the audience what it wants or make the film thematically coherent.

Eggars is entirely unaware that this material is inherently campy while at the same time the movie’s too well-made for it to be unintentionally funny. It’s too good to be so bad it’s good, unfortunately, but it’s not so good it can’t be a little dull.