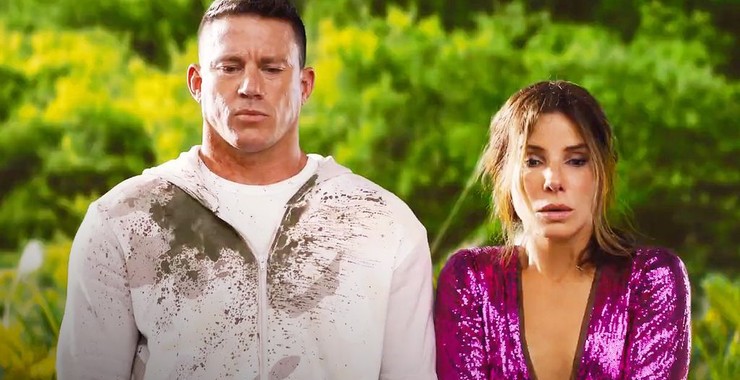 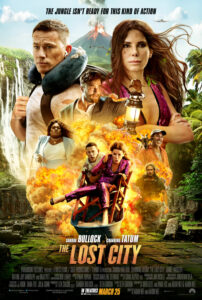 I was excited by the prospect of a romantic adventure movie having enjoyed pictures like Romancing The Stone and the The Mummy with Rachel Weisz and Brendan Fraser. Last year’s awful Jungle Cruise did such an abysmal job at reviving the genre, I was hoping this one would get it right.

It pains me to say The Lost City — which as a title is a lame riff on James Gray’s 2016 picture The Lost City of Z — is no better than Jungle Cruise. It doesn’t work as a comedy, a romance, or an adventure yarn. The only possible reason for watching it is to spend time with the stars, but their charm isn’t enough to lift it above the mediocre. 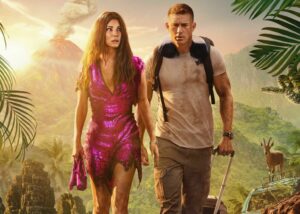 Sandra Bullock is Loretta Sage, a romance novelist who’s had enough of her career and wants out. This upsets the cover model for her books, Alan Caprison, played by Channing Tatum, who’s been living off the notoriety of being a Fabio, the image of Loretta’s literary hero. 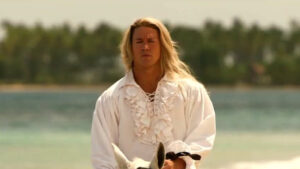 From the jump Alan seems entirely clueless and largely irritating, prone to cheesy spoonerisms. We learn Loretta’s a widow, and her husband was an archeologist who did research on a mysterious, vanished culture. Loretta used some of that research in her book, which brings billionaire heir Abigail Fairfax, played by Daniel Radcliffe, onto the scene. 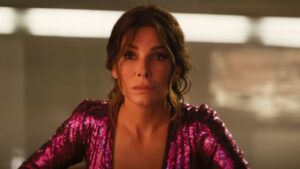 He wants Loretta’s help to find the titular lost city, which he’s convinced is on a remote volcanic island — which they say is in the Atlantic (though on the map it looks like it’s in the Pacific). As Fairfax won’t take no for an answer, he kidnaps the novelist and abducts her to the island, prompting Alan, desperate to live up to the image of this romance novel hero, to attempt a rescue.

There’s a real opportunity here to undermine the stereotype of the Alpha Male as imagined in all kinds of genre fiction — not just romance novels — but instead the movie seems more interested in making fun of Alan’s Beta Male qualities. Even the arrival of Brad Pitt as a real action hero type, Jack Trainer, doesn’t do much with the possibilities — he’s barely in the movie, anyway. 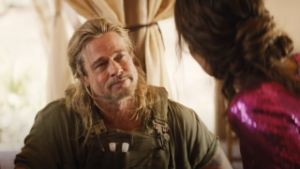 While Tatum and Bullock have some chemistry, the script does nothing to generate any actual heat between them. We never really get to fall in love with these two or with the idea of them being together. That while Da’Vine Joy Randolph and Patti Harrison in support are pretty much wasted.

Despite Radcliffe having learned his craft at the feet of great British thesps who made careers as villains in American movies — Alan Rickman and Gary Oldman are but two who come to mind — he never goes big enough or moustache-twirly enough to make much of an impression here. In fact, Fairfax is so reasonable and has access to such resources you start to wonder why Loretta doesn’t just team up with him since they pretty much share the same objective. 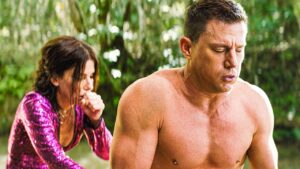 Since the actors are the only reason for seeing this at all, I have to lay the film’s ultimate failure on the filmmakers. They went to the trouble to shoot in the Dominican Republic, in actual jungle landscape, but then they frequently cut to obvious in-studio set-pieces that feel utterly artificial. A few scenes are so badly lit you can’t tell whether it’s day or night, while others are slathered with incredibly cheap-looking CGI. At one point a character arrives in the daytime, but in the next scene we switch back to night. As a whole, the production feels confused and thrown-together.

With the addition of a couple of poorly staged action and chase scenes, the film started to remind me of the second half of Indiana Jones and the Kingdom of the Crystal Skull — the part of that movie most want to forget with characters swinging on vines with monkeys… and ridiculous scenes of boats going over waterfalls.

Much would’ve been forgiven if I’d laughed even once at The Lost City, but no.