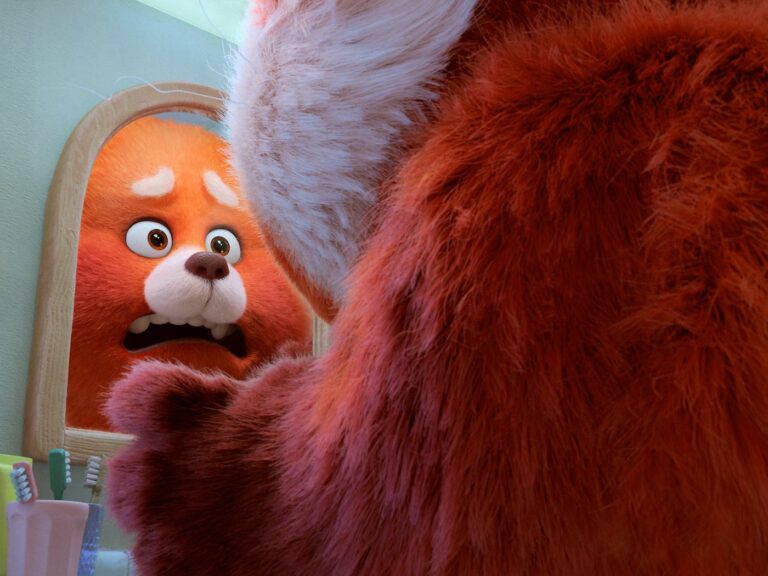 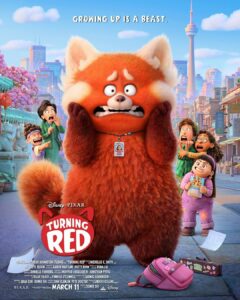 This picture made me think of a good friend back in my Toronto days. He’s a first generation Canadian who upset his traditional mother by choosing a bride she found inappropriate. He went ahead and got married despite the familial schism it caused, and I don’t think he’s ever regretted the decision.

Things work out a whole lot better for the characters in the wonderful Turning Red, the new Pixar animated film set in Toronto’s Chinese community, but I expect its story is going to resonate with a lot of people who’ve witnessed the values of the older generation not entirely fitting in with the newer. Rest assured, this isn’t just for people who happen to be children of immigrants. 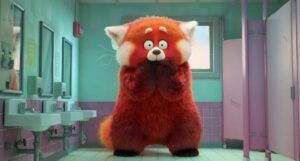 Every tweenager has these feelings about their parents, whether there’s the added complication of cultural values or not. Turning Red presents a great metaphor for the sudden growth that comes with puberty, but it’s also broader than that. It’s about how we all embrace new things as we grow up that helps define who we are as people.

We all go though it. I can remember thinking somewhere in my early teens, “I don’t know who I am, so how could my parents know me anymore!” and, “My friends are the only people who really get me!” 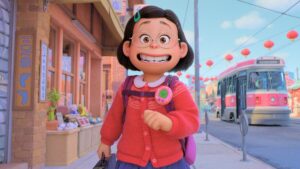 Here it’s Meilin Lee (Rosalie Chiang), a 13-year-old who lives in Toronto’s Chinatown in 2002 — the Toronto touches, from the streetcars to the convenience stores to the Skydome, are all right on the money. Mei loves her mother, Ming (Sandra Oh), and has worked hard her whole life to earn her approval, but she’s also into this super-hot boy band, 4-Town, and starting to notice other boys, too. 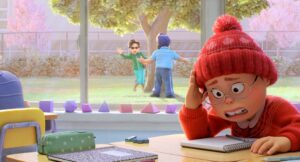 Along with puberty, so arrives Mei’s transformation into an enormous red panda. Understandably, this is upsetting, but what she starts to figure out is if she can control her emotions, she can keep the panda at bay. What is also clear is her mother knows about the panda — it’s a bit of a family secret. 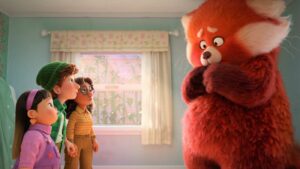 The tension here is between Mei and Ming, the challenge of tradition versus modernity, familial responsibility versus youthful enthusiasm. It’s also about how Mei and her tight group of dork-squad friends — Miriam (Ava Morse),  Priya (Maitreyi Ramakrishnan), and Abby (Hyein Park), all terrific — find a way to turn the liability of Mei’s condition into an asset in order to go see 4-Town in concert and deal with the irritating boy in their class, Tyler (Tristan Allerick Chen). 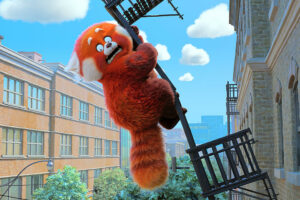 The fantasy elements in Turning Red perfectly illustrate the challenges of this particular time of life, even the parts where this new, developing version of yourself can be attractive, frightening, and revolting to both yourself and other people. The film goes to some effort to help us understand exactly what Mei is feeling, to give us a look through her eyes.

Beyond the many things that make Turning Red cute, honest, insightful, and heartwarming, it also qualifies as a monster/kaiju movie. It barely needs saying that Pixar remains Hollywood’s big bear in quality computer animation, with the stunning imagery here inspired both by anime generally and Miyazaki specifically. 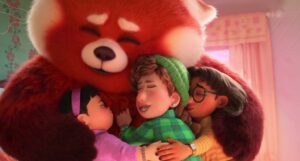 Director Domee Shi, already an Oscar winner for her short Bao, has delivered a special, personal film with her first feature. Pixar’s record in the past 10 years includes Inside Out, Coco, and Soul, and in comparison Turning Red is as good or better, while offering storytelling that feels like a genuine departure from what they’ve done before.

And did it make me feel homesick for the city of my young adulthood? 100%.

One final note: on Disney+ there’s a solid Turning Red making-of documentary, which includes a Movie Title Idea board from early in the production process. I wanna say even while Turning Red is a perfect title, I would’ve enjoyed Notorious RPG (Red Panda Girl), Red To Me, or My Neighbour Toronto — provided it was the Canadian spelling.