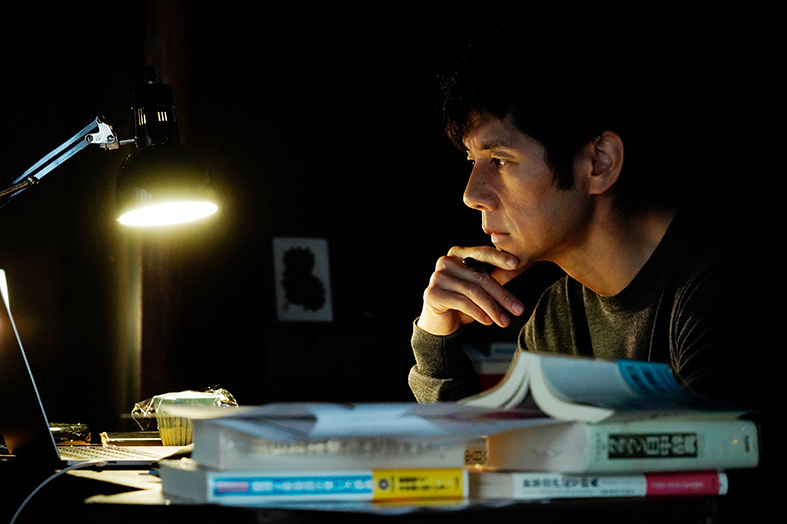 Directed by Ryûsuke Hamaguchi | Written by Hamaguchi and Takamasa Oe, based on a short story by Haruki Murakami | 179 min | ▲▲▲▲△ | Crave Plus 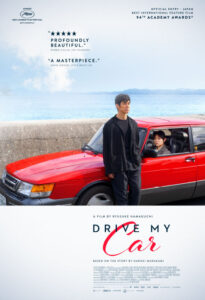 This review originally appeared on FITI in December 2021 when the film screened at Carbon Arc Cinema.

Drive My Car is an odd, unique, and finally involving experience — at first a little alienating, but over its running time the film won me over with the seriousness of its intent and lovely, unhurried narrative.

Hamaguchi pulls the trigger on the credits about 40 minutes in, suggesting that everything that comes before is prologue: It’s a deliberate set-up that suggests a more melodramatic tone than the film really delivers, teasing a possible thriller that never emerges. That’s for the best. 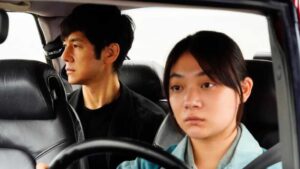 Kafuku (Hidetoshi Nishijima) is a respected theatre artist working in Tokyo with a loving and supportive wife, Oto (Reika Kirishima). She’s also a creative — they spend time talking about her stories in the post-coital afterglow, spinning them into screenplays together, which take on ponderous metaphorical weight. A surprise infidelity and a sudden, unexpected tragedy, and we’re propelled two years into the future where Kafuku is a guest at a Hiroshima theatre event to put on his take on Chekov’s Uncle Vanya, fascinatingly language-blind — if that’s the term. Kafuku casts actors who speak Japanese and Korean, even one who communicates in Korean sign language, with the text translated into multiple languages on a projection behind the stage. 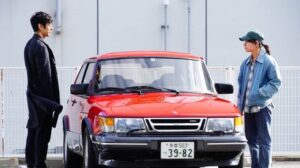 In an unlikely twist, he’s obligated to take on a driver by the organizers of the festival, a younger woman (Tôko Miura), who disrupts his valued time in his vintage red Saab — the car becomes practically a fetish object by the film’s end. The car is where Kafuku learns his lines listening to a tape of his wife reading through scenes. The film then becomes about the connection between artist and chauffeur, as well as the lingering tension, and awkward history, between Kafuku and the young actor (Masaki Okada) he casts as Vanya. 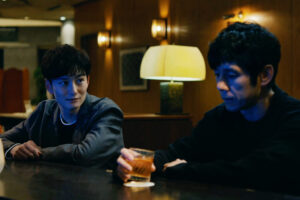 Once the plot proper of Drive My Car is established, so too is the filmmaker’s patient confidence in his storytelling. That hindsight prologue ends up feeling like something that could’ve been told in 10 minutes of screen time if he’d excised an unnecessary car accident, medical diagnoses, any number of points that do nothing but postpone the start of the central story and have little payoff. 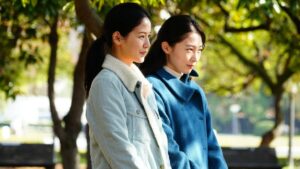 Having said that, any disagreeability on early creative decisions is fleeting because what comes after is so engaging. Drive My Car speaks of communication and language, unexpected connections, and the understanding, maybe even healing, that comes from sharing tales of profound loss — all haunted by the regular comparison of theatre and life, and Chekov’s familiar melancholia. 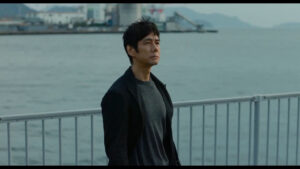 Like Wheel of Fortune and Fantasy, Hamaguchi’s lets scenes play out with long stretches of people in rooms (or cars) talking, reams of dialogue freighted with meaning and subtext that will roll around your head long after the film is over.

Stories of people spending a lot of time together in a vehicle has precedence in Hollywood in movies like Five Easy Pieces, Thelma & Louise, and Green Book. It makes a lot of sense in a culture that’s so automotive-centric, and it provides any number of thoughtful allegories. Seeing one of these in a culture outside of the United States feels very different. Less a likely symbol of sexual freedom or masculinity, more the idea of going on a shared journey.