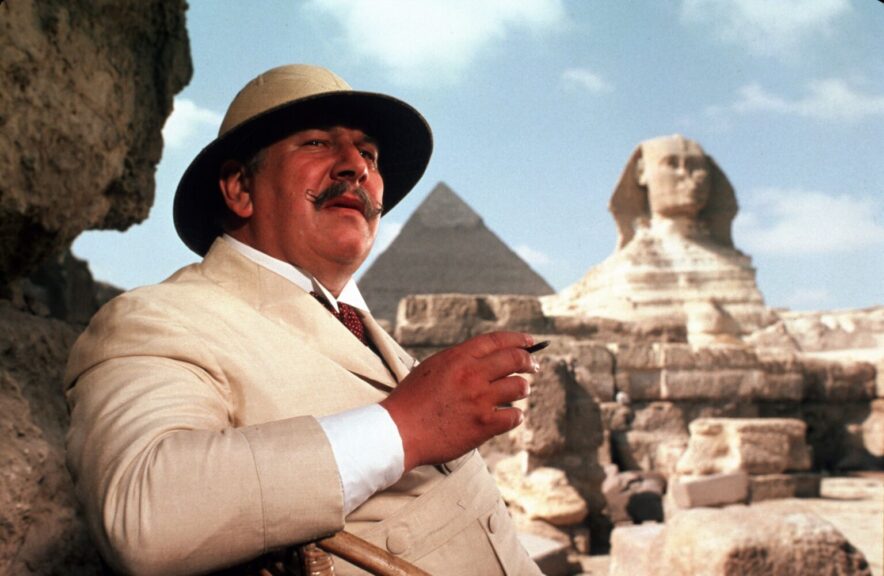 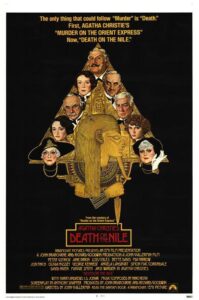 As I mentioned back when I reviewed Ken Branagh’s take on Murder On The Orient Express in 2017, it was Guillermin’s Death on the Nile that introduced me to Agatha Christie on film — I saw it a number of times when I was a kid. Having spent years of my childhood in the Middle East, I appreciated the authenticity in the Egyptian shooting locations — Giza, Abu Simbel, and the Temple of Amun — even though all the interiors and night scenes were shot on a set at Pinewood. 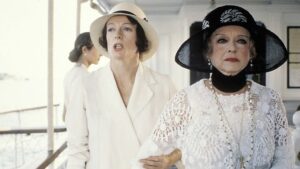 Watching it again, the set-up really takes its time. It’s more than an hour in before anyone gets murdered! In the meantime we get to visit all those historic Egyptian locales and to know the sprawling cast.

It’s the magnificent Peter Ustinov playing Christie’s Belgian sleuth, Hercule Poirot, who, while on a late-1930s Nile river cruise, is pressed into service to deduce the killer of an American heiress, Linnet Ridgeway (Lois Chiles). 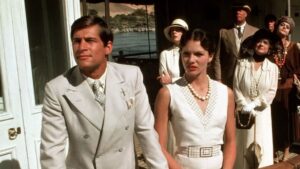 This isn’t a big spoiler: That first hour is also spent providing motive for murder to practically every other person on the boat, so you can see the first death coming. Jackie De Bellefort (Mia Farrow) seems the likely prime suspect as the former fiancé of Simon Doyle (Simon MacCorkindale), the man who threw her over for her good friend, “the Ridgeway girl”. 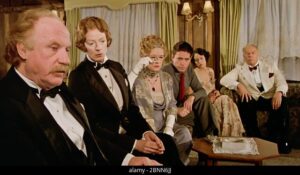 But plenty on the boat are also suspect for a variety of reasons: Linnet’s put-upon personal assistant, Louise (Jane Birkin), pearl-hungry Mrs Van Schuyler (Bette Davis), her servant, Bowers (Maggie Smith), whose family had bad blood with the Ridgeways, romance novelist Salome Otterbourne (Angela Lansbury), entangled in a libel case with the Ridgeways, her daughter, Rosalee (Olivia Hussey), Pennington (George Kennedy), an American shyster, the Swiss quack, Dr Bessner (Jack Warden doing an outrageous accent), and the slightly dull Mr Ferguson (Jon Finch), who’s simply offended by all the conspicuous consumption. One wonders how he managed to afford to go on this trip at all. Last, but far from least, David Niven appears as Colonel Race, a Dr Watson to Poirot’s Holmes. 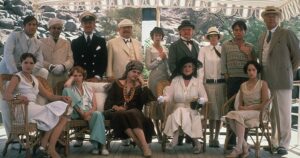 Once we get into the meat of the plot the bodies pile up thick and fast, and as with so many Christie tales it’s a genuine challenge to spot the murderer.  Even if you don’t, it’s hard to go wrong hanging out with this excellent cast — I’d have been happy to spend the whole time in the cabins of Davis, Smith, and Lansbury, though Ustinov and Niven make eminent, stylish gumshoes. 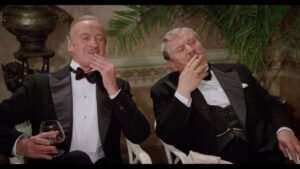 A final tip of this reviewer’s hat must go to a couple of wizards behind the scenes: Jack Cardiff for the lovely, crisp cinematography, and especially Nino Rota, the famed Italian composer, for his fantastic, unmistakable theme, which brings an essential grandeur to the proceedings. 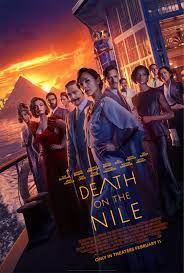 Ken Branagh’s version takes the tale to a far darker place than the puzzle-solving banter of its star-studded, slightly stuffy but also comedic predecessor. He does that by opening his film in the Belgian trenches of World War One, providing an origin story for both Hercule Poirot’s identity as a sleuth and his moustache, giving him a much more personal stake in this story. But as with Branagh’s Murder On The Orient Express, the director is so comfortable making his movie in front of green screen it’s hard to believe they ever went to Egypt, replacing the grit of location with a staginess that, even with a lot of camera swooping, is to the picture’s detriment.

The murder comes much faster this time, leaving more of the character backstories to be revealed after the fact, when Poirot (Branagh) interviews the suspects. Like the previous Death on the Nile, it’s wealthy, beautiful Linnet (Gal Gadot) and penniless Simon (Armie Hammer) who ditch Jackie (Emma Mackey) and run off together, with Jackie bent on revenge and/or self-harm in the wake of heartbreak, tracking the young marrieds to Egypt. 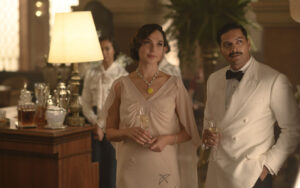 This time the cruisers have all been invited by the couple to be part of a post-elopement honeymoon celebration down the Nile, which actually makes a lot more sense.

Poirot’s right hand man this time is Bouc (Tom Bateman), who we met on the train from Istanbul (which I barely remembered — Bateman doesn’t make much of an impression), here with his mother Euphemia (Annette Bening), who is painting Egyptian landscapes. Linnet’s maid, Louise (Rose Leslie), and her ex, Dr Windlesham (Russell Brand), are both on board, as is Jennifer Saunders in the Bette Davis role as Van Schuyler and her longtime partner in comedy, Dawn French, as her companion, Bowers.

In this version, Salome Otterbourne (Sophie Okonedo) is a blues musician — bringing some welcome diversity to the story as well as offering a possible love interest for Poirot. It’s Salome’s niece, Rosalie (Letitia Wright), who’s a former classmate of Linnet’s. The credibly crooked lawyer on board is named Katchadourian, played by Ali Fazal.

Why they all may want harm to befall Linnet I’ll leave the film to reveal, but I was pleased to note the motivations are occasionally more arcane and unexpected than the ones laid out in the 1978 version.

In the question of adaptation and familiarity, there’s still plenty to enjoy here. Even as someone who could see the twists coming and knowing who the murderer is from the jump, it didn’t spoil the fun of Branagh’s effort. 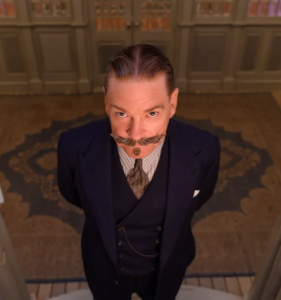 What almost did is recognizing that after the street-level, shot-on-location authenticity of his semi-autobiographical period picture Belfast — still in cinemas — in another period movie he’d happily settle for the painfully cheap-looking backdrops and obvious fakery in the digital sets rather than bring his cast and crew on a trip up the father of African rivers. He loses a pyramid for that choice.