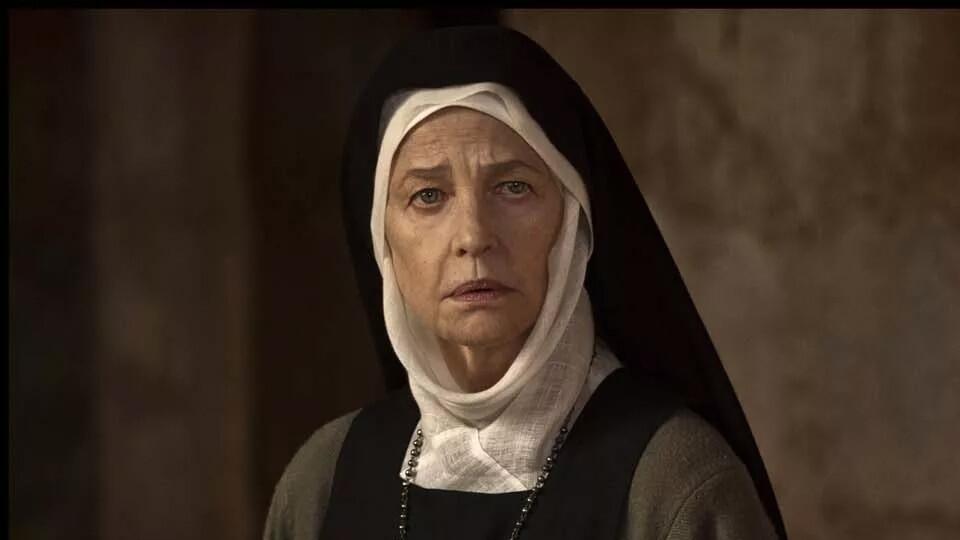 Directed by Paul Verhoeven | Written by Verhoeven and David Birke, based on the book Immodest Acts: The Life of a Lesbian Nun in Renaissance Italy by Judith C. Brown | 131 min | VOD | ▲▲▲▲△ 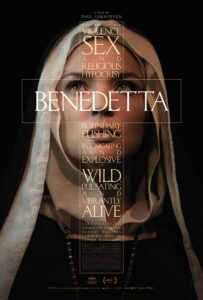 I often wonder what movies would be like without Paul Verhoeven. Not really often, but can you imagine? Without the provocations of The Fourth Man, Flesh and Blood, Robocop, Showgirls, Starship Troopers, or Elle? With his playful disrespect for tone while taking big swings at satire, comedy, and melodrama, there really isn’t anyone like him making movies these days. Even at age 83 his delight in filmmaking is evident — Benedetta delivers all the lurid excess you’d expect from the Dutch filmmaker, and then some.

All that said, what makes this entry in his filmography startle isn’t that it’s actually so rule-breaking — in many respects it’s a whole lot tamer than some of his earlier work, which at times has reached for and beyond the special nuttiness of, say, a Ken Russell. It’s just that we see so little of this kind of  art-house-in-questionable-taste these days, which makes Benedetta so refreshing. 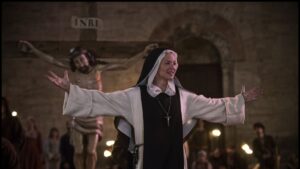 The film tells the apparently based-in-truth tale of a 17th century girl brought to the convent at a Tuscan town to be raised as a nun. The only way she’ll be accepted in this house of God is if her father pays a dowry to the church — the commerce and hypocrisy of the papacy evident from the start.

She’s barely been there a few hours and a bare-breasted sculpture of the Virgin Mary falls on her, prompting the girl to taste a nipple. We know where this is going. 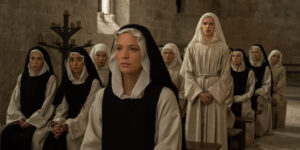 Fast forward 20 years and Benedetta (Virginie Efira) is still God-fearing under the watchful eye of the Abbess (Charlotte Rampling) and her daughter, also a nun, Sister Christina (Louise Chevillotte). Benedetta starts having visions of Christ the Shepherd, as a knight with a bloody sword, and up on the cross.

But are her visions authentic or is she a charlatan?  Benedetta plays it entirely straight, even when there’s plenty of evidence she’s conning everyone around her. Maybe she’s just insane. Sister Christina certainly had her doubts, but the Church isn’t opposed to the spectacle and attention this will bring them. The Lord works in mysterious ways.

In the midst of all this arrives a young woman (Daphne Patakia) trying to escape her abusive father. As she becomes a noviciate she also expresses carnal interest in Benedetta. 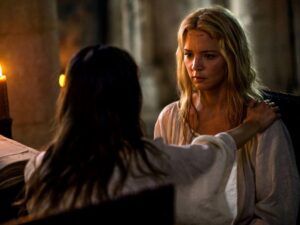 Yes, this is a lesbian nun movie. 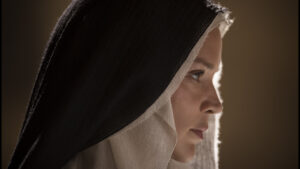 At one moment we’re getting doses of pure melodrama, the next a few sharply delivered gags, before a scene or two of gratuitous nudity, and, later on, splashes of gore and vivid plague symptoms, all anchored by the compelling mystery of Benedetta’s true motivations. The picture manages to maintain that ambiguity while taking its shots at organized religion and gender roles, even suggesting a Trans Christ, and having a ball while doing it. By the time Lambert Wilson shows up to burn nuns at the stake, the whole affair has achieved an almost Monty Python-esque level of transgressive absurdity. 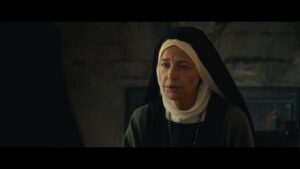 Efira is solid in the lead, but this is really Rampling’s movie. Her character exemplifies the duality at the heart of the film: a combination of belief and skepticism wrapped up in devotion and blasphemy.