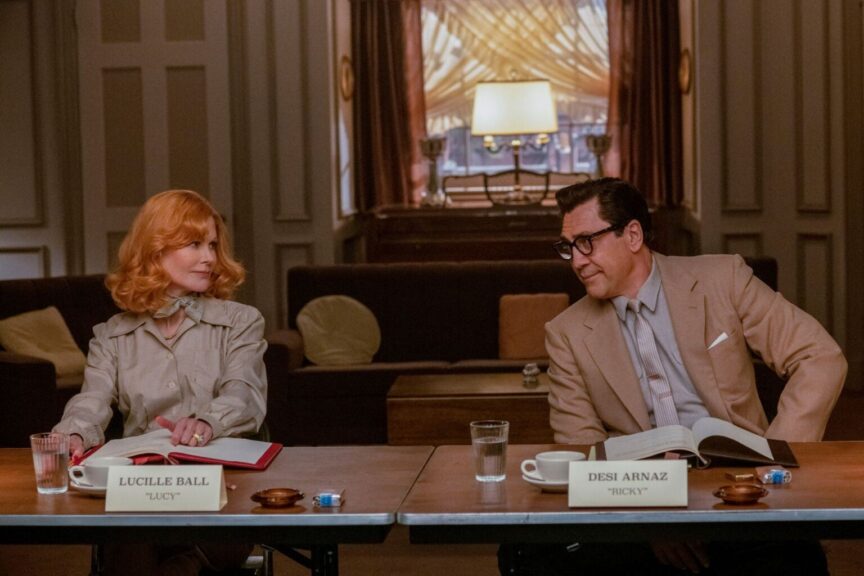 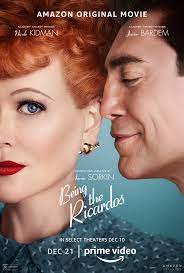 It’s the mid-1950s and comedian Lucille Ball is the biggest thing on TV. Her sitcom I Love Lucy earns 60 million viewers a week. We know this because we’re being told as much in the movie by the show’s writers, interviewed in a faux-documentary style many years later. It’s an obvious technique, holding up a sign: here’s the exposition and these are the stakes!

The writers are talking about a specific week in the production of the show, a week with three major issues challenging its talent: Ball’s been accused of being a communist by popular radio journalist Walter Winchell, 2) Lucy’s real-life marriage to her real-life business partner, who’s also her on-screen partner, Desi Arnaz, might be in trouble because the tabloids are reporting he was out partying with other women when he says he was playing cards on his boat, and 3) Ball is pregnant, and she and Desi want to write it into the show. It’s a show paid for by a cigarette company on the notoriously conservative CBS network where you couldn’t even say “pregnant,” let alone feature a pregnant woman. That would presume someone had sex! 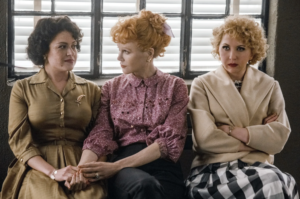 We’re thrown into this scenario right off the top, and into the crucible of an episode read-through where we meet the younger versions of those writers along with various directors, producers, and other hangers-on. Typical of Sorkin the dialogue is delivered like bullets from an automatic weapon. I love that about Sorkin, his wit and the speed with which he delivers it, expecting his audiences to keep up.

It’s not the first time Sorkin’s impressed us with his brilliant wordsmith skills. His work on Sportsnight and The West Wing were unimpeachable, but the smug self-importance of Studio 60 on the Sunset Strip and The Newsroom were harder to love. His scripts for A Few Good Men, The Social Network, and Moneyball soared, but Charlie Wilson’s War was forgettable and  Steve Jobs abysmal.

Now that Sorkin is writing and directing his pictures, he’s got a platform for his brilliance but nowhere to hide his flaws. Molly’s Game exhibited his typical, sharp eye to detail and razor-sharp wit, but was scuppered by a streak of daddy-issue sentiment. With The Trial Of The Chicago 7 he wore his big-hearted liberalism on his sleeve, but the film was directed with all the flourish of someone who’s learned his craft on TV. 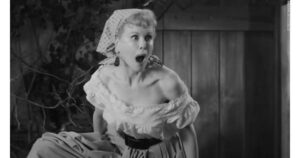 Given that’s a part of Sorkin’s package, a movie largely set on a 1950s television soundstage should be a good fit — it doesn’t require a lot of cinematic flourish. Accordingly, Being The Ricardos ends up feeling like the pilot for a longer series, but it’s a strong one. I’d keep watching. 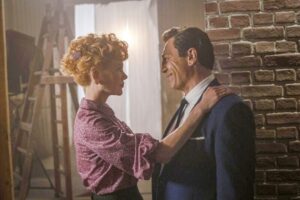 The picture works particularly when it focuses in on the relationship challenges of the central couple where both are successful, career-driven people, with neither wanting to sacrifice their work for being together. It also shows how much harder it was for Ball, who’s slammed up against Hollywood’s systemic sexism and agism on the regular.

Sorkin deftly and regularly bounces us into the past, showing Ball and Arnaz’s meeting, courtship, and the details of her RKO years when she was fighting for roles in feature dramas, without ever letting it get confusing. The regular look into Ball’s creative process as she envisions scenes in black and white on the sound stage is a window into her particular genius. 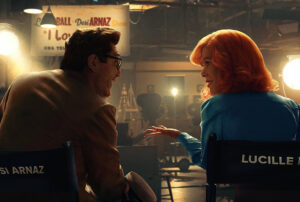 We get a passel of laugh-out-loud moments delivered by a talented cast, including Alia Shawkat as Madeline Pugh, one of the staff writers, the smartest person in the room (who’s had to fight to be in the room) with male writers — played by Jake Lacy and Tony Hale. Nina Arianda gets the meatiest character in support, and is maybe closest to resembling who she plays: Vivian Vance, who was Ethel Mertz in I Love Lucy. The always reliable JK Simmons is William Frawley, who plays Ethel’s much older husband, Fred. Also great seeing Sorkin regular Clark Gregg as a CBS functionary.

Nicole Kidman is a pro and she does good work here, especially using her voice to mimic the kind of projection Lucille Ball was known for, as well as the steel in her spine. Kidman was given unwarranted grief online when it was announced she’d be getting the role after Cate Blanchett dropped out, which if it was about her look is entirely unfair. Javier Bardem, who appears as Desi Arnaz, he looks a lot less like the actual person he’s playing than Kidman does, but nobody complained about him. 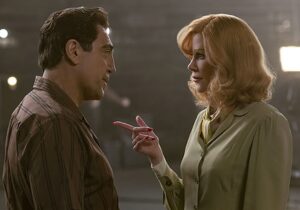 If there’s a problem with Kidman it’s the make-up (and probably latex) helping to give her some of Ball’s look. It  diminishes her expressiveness. Ball was nothing if not expressive, and at times Kidman just appears as a blank slate. The intensity of her eyes and her upright posture do a lot of the heavy lifting, but otherwise she’s hampered by the greasepaint.

Overall, though, Being The Ricardos an entirely watchable biopic that gets better as it goes along —an unusual pleasure.