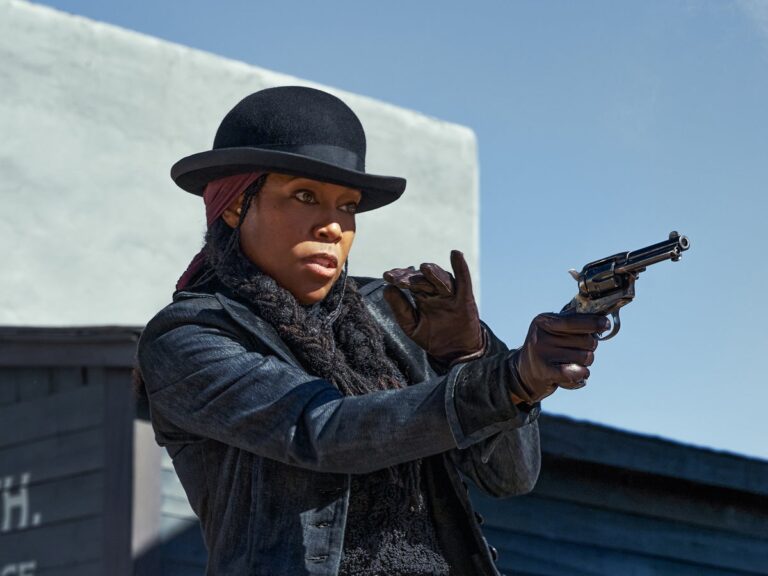 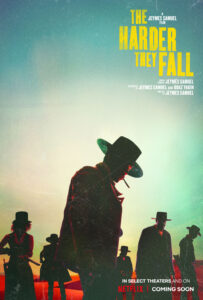 Westerns with Black casts aren’t unprecedented, but they are a rarity. That’s not all that makes this picture special — Director Jeymes Samuel, also a musican, tells the story with action and style to spare, fuel-injected with a hip-hop and reggae score. 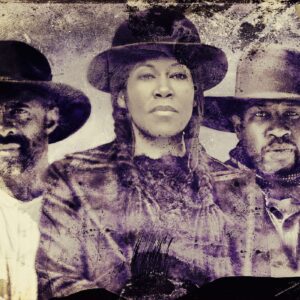 The Harder They Fall is a treat, while reminding us up front with a text on screen that while what we’re seeing is fiction, These People Existed. It’s important to keep in mind these are actual historical characters, even with the fictionalizing in effect here. The whitewashing in the genre goes way back. 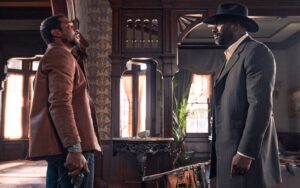 A man, a woman, and their child are sitting down to dinner in their shack somewhere in the middle of nowhere. A bad man arrives, killing the man and woman, physically and emotionally scarring the son. Some time later the boy is a man, an outlaw: Nat Love (Jonathan Majors, who with this and Loki must now be a star). He’s been hunting down the gang members of the killer whose name is Rufus Buck (Idris Elba). He’s locked away in jail in Yuma.

Except he’s not — he’s been pardoned with an assignment to kill a bunch of corrupt soldiers. Once free, Buck heads back to his home in a colourful desert town called Redwood with his trusted lieutenants at his side, key amongst them Trudy Smith (Regina King) and Cherokee Bill (LaKeith Stanfield).

Buck finds himself in need of a large infusion of cash, and when Nat comes calling, Buck captures Nat’s lady love, Stagecoach Mary (a fierce Zazie Beetz), and forces Nat and his gang — including Jim Beckworth (RJ Cyler), Bill Pickett (Edi Gathegi), and Cuffee (Danielle Deadwyler) — to secure the money for him.

Oh, and I haven’t mentioned the welcome addition of a lawman to the scenario, Bass Reeves (the ageless Delroy Lindo). 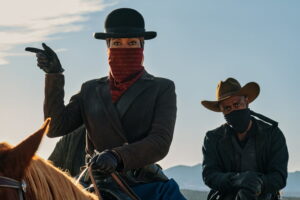 From the off, not much of this story makes sense, nor does the picture have an especially affectionate relationship with realism. Check the exquisite red, yellow, and blue costumes barely if ever scuffed or soiled. Check the formally art directed sets, the posed blocking and swooping camera.

Check the way the plotting keeps stalling — especially in the overlong second act — making excuses for characters not to have it out with flying lead, building instead to an inevitable and somewhat cliched main-street shootout. In other words, this is nothing we haven’t seen before — we just haven’t seen it quite like this. 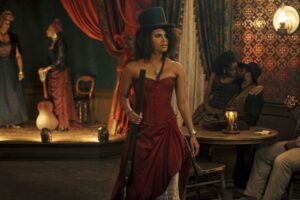 Because none of the picture’s flaws much matter with the kind of fun being had by the filmmakers and the cast. Everyone knows what kind of movie they’re making and they go for it — both barrels blazing. King practically picks the scenery out of her teeth after chewing it. The aforementioned soundtrack is sensational, the script sizzles with zingers, and the editorial choices keep the action sequences fresh if occasionally overdoing the spurting blood. 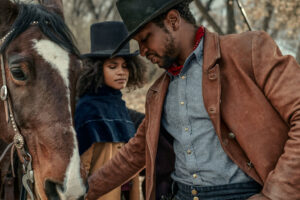 And towering over the top of it all is Elba. For the first time in awhile he finds a role that really suits his badass gravitas. The final face-off between his Buck and Majors’ Love is worth the wait — it delivers a terrific twist I didn’t see coming and a surprisingly emotional resolution.