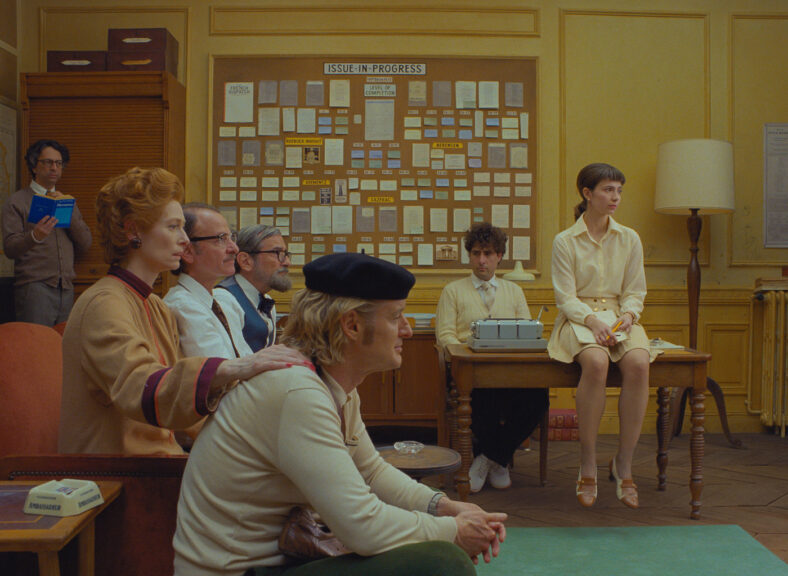 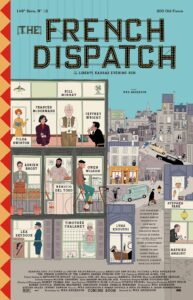 I’ve long appreciated Wes Anderson’s strange magic. I have plenty of time for his tiny twee classics like Moonrise Kingdom, The Life Aquatic with Steve Zissou, and the writer-director’s masterpiece, The Grand Budapest Hotel. What I like so much about that 2014 film is it balances his fascination with intricate, art-directed-up-the-wazoo tableaux with a hilarious but also deeply felt satire of fascism. Since then Anderson has given us the animated fantasy, Isle of Dogs.

Now we have The French Dispatch, maybe the most Andersonian of all Anderson’s work yet. 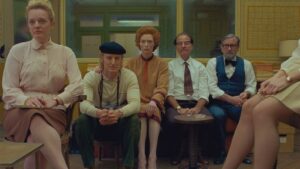 Its visuals are deeply horizontal, preferring to operate in a two-dimensional space, with characters and objects moving from left to right or right to left as if he’s animating his live action actors and spaces. He loves his primary colour schemes, he loves switching screen ratios, jumping from colour to black and white to colour again. And he loves populating his films with some of the most recognizable actors in Hollywood, even if they’re only in a single scene.

But what is The French Dispatch about? It seems to be an absurdist homage to the long-form journalism of the 1960s and a recognition of the lonely lives of people who choose to write, coming to their stories from the outside. It’s a laudable effort, but now hours after having watched it I’m still not sure it really works. 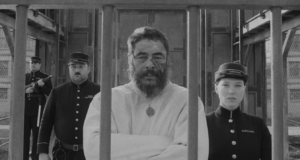 It’s set in 1975 and flashes back to years previous in the fictional French city of Ennui-sur-Blasé — a solid gag right there — in an American magazine’s local editorial offices. The magazine’s founder and Editor in Chief,  Arthur Howitzer Jr (Bill Murray) dies of a heart attack, and as per his wishes the magazine will fold. The picture presents the magazine’s final issue’s stories as an anthology:

Herbsaint Sazerac (Owen Wilson) is The Cycling Reporter, presenting the city of Ennui’s seedy underside across generations. As an intro, this is a brief, fun set-up to the way this story will be told, with Anderson already using a lot of theatrical techniques for his mis-en-scene. I was reminded a little of The Ballad of Buster Scruggs. 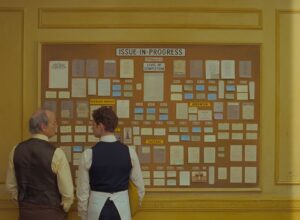 J.K.L. Berensen (Tilda Swinton, featuring a set of choppers making her look a little like Joni Mitchell) tells the tale of The Concrete Masterpiece, about convicted murderer and artist Moses Rosenthaler (Benicio Del Toro) attracting great fame for his paintings from behind bars, his inspiration, prison guard Simone (Léa Seydoux), and his art world financier, Julien Cadazio (Adrien Brody). This frantic, farcical yarn delivers a few laughs along with more than its fair share of distracting flips between colour and black and white. 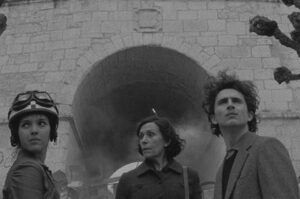 Lucinda Krementz (Frances McDormand) is a middle-aged writer covering a student revolt in Revisions To A Manifesto. The movement is led by Zeffirelli (Timothée Chalamet, the acting polyglot who weirdly doesn’t speak French at all in the film). Krementz has an affair with Zeffirelli in the middle of her coverage, compromising her journalistic objectivity — a point of discussion — though encouraging a female student, Juliette (Lyna Khoudri) to get friendly with the boy.  While I appreciated Chalamet’s desperate efforts to grow a moustache, there’s something slightly condescending in the tone of this one, like Anderson’s having a laugh at youthful rebellion for no good reason. Maybe when the privileged have no good reason to rebel?

The Private Dining Room of the Police Commissioner is told by Roebuck Wright (Jeffrey Wright), the story that starts as an examination of cuisine sprung from law enforcement, but ends with a violent effort to rescue a kidnapped child and a mass poisoning. Wright is terrific here, though my patience for this one was on the wane by the time this segment arbitrarily goes fully animated . 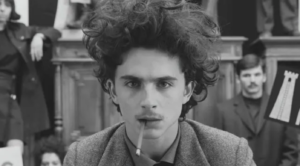 There’s much to admire here, not the least of which is the idea that an American magazine could have an office in France serving a huge audience in Lawrence, Kansas, and around the world. It’s hard not to appreciate the effort to pay tribute to this New Yorker-styled publication and its writers, and I also liked that Anderson brings in more of the awkward, sometimes intergenerational romance and sexuality he dabbled with in Grand Budapest and his pre-Darjeeling Limited short, Hotel Chevalier. 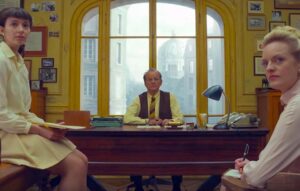 I struggled to reconcile feelings of real frustration around the way the stories are told, the most mannered Anderson has ever been without a doubt, with a recognition of his ongoing, distinguished charm, a charm that draws the best actors in the business. When Elizabeth Moss, Christoph Waltz, Edward Norton, Willem Dafoe, and Saoirse Ronan all appear but barely have a line of dialogue in your film, that’s heft. 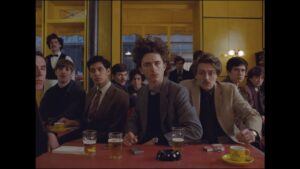 Anderson’s earned that power, but in The French Dispatch he indulges in a stylistic playfulness to such a degree it’s easy to get lost in his design-obsessed, hyper-edited formality and miss the story altogether. I suspect a second or third viewing will make it all much clearer, but if that’s what’s required does the movie succeed?