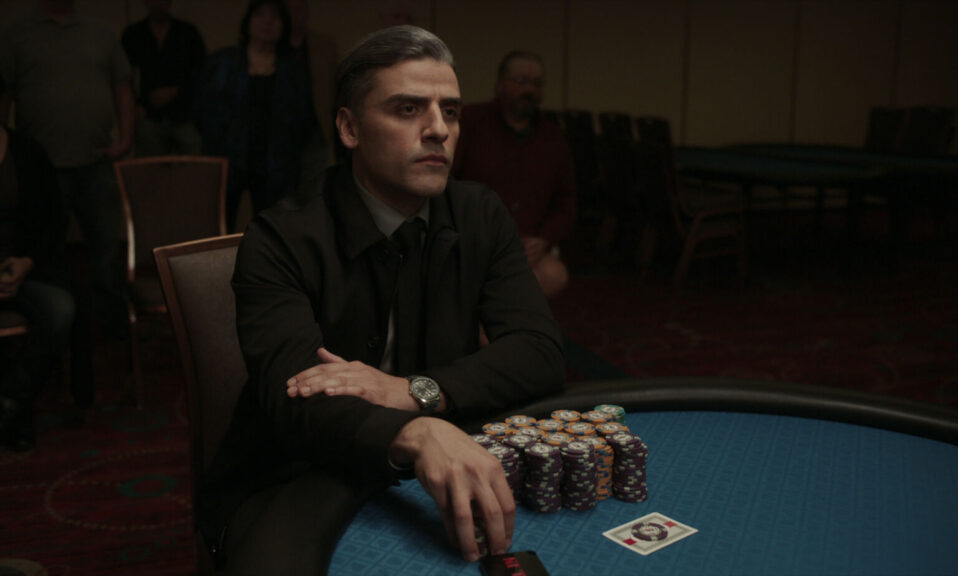 Written and Directed by Paul Schrader | 109 min | In Cinemas 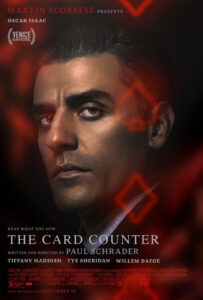 “Nothing can justify what we did. If you were there you’d understand that. Otherwise, there is no understanding.”

This is a little truism spoken by William Tell (Oscar Issac) —his surname’s actually Tolliver, but his nom-de-pari is the poorly chosen Tell. 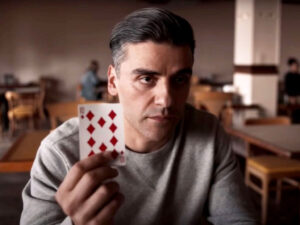 He’s a professional gambler, moving from town to town to play small stakes games in casinos. He travels with cotton and twine, with which he wraps all the furniture in his motel rooms. He’s surprisingly averse to risk for a card player, but then he has a deliberate and predictable system for each of the games he plays. It’s all routine. Why would someone want to live this kind of life? We’ll soon see.

Tell aka Tolliver has looked into the heart of darkness and is permanently scarred by what he saw. I won’t reveal the specifics of his sin, his bone-deep trauma, or his undeniable guilt, but Schrader paints a deeply disturbing picture, in a couple of scenes utilizing widest angle, distorting lens I can remember seeing in a feature. 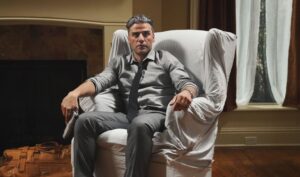 Tell meets Cirk with a C (Tye Sheridan), a single-minded young man with a money problem and a sideline connection to Tell’s past. Tell offers Cirk an opportunity, inviting him to come along on his circular casino tour, to keep Tell company as he earns enough money to help out Cirk’s financial issues. 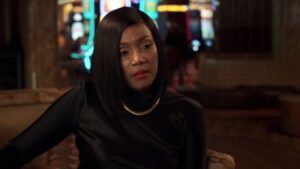 Around the same time, Tell connects with an investor, La Linda (Tiffany Haddish), who’s willing to stake Tell on bigger money tournaments. Also haunting the margins of the film is a security contractor played by Willem Dafoe, at maximum creep. He seems to have checked his soul prior to taking this role.

Haddish and Isaac bring an interesting, unlikely chemistry. Sheridan’s a bit flat, maybe even underwritten, but not so much that he ends up capsizing the film. 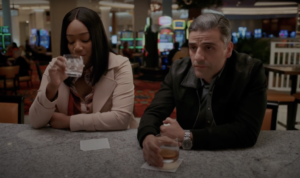 With a thrumming, Carpenter-esque synth score, punctuated with tracks by Robert Levon Been, a suite of scenes featuring a restless, prowling camerawork, and Isaac’s deeply still, entirely well-observed performance, Schrader turns out another dark, haunting film, a terrific follow-up to First Reformed.

If it doesn’t quite have his 2018 feature’s breadth and environmental ambition, The Card Counter still brings an impressive intensity and anxiety, like a desperate shortness of breath that sustains over almost two hours. It has a resonance that insinuates as we go along, sinking deeper into Tell’s life and allowing us an understanding of what his experience says about the world we all live in.