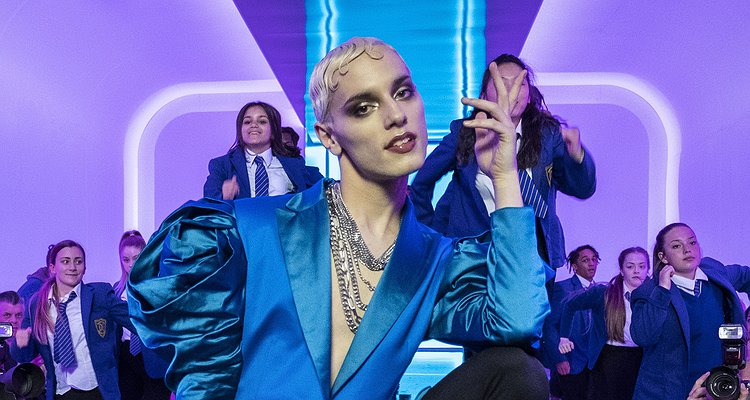 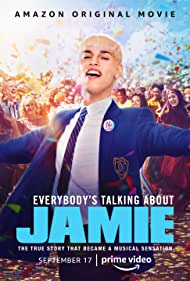 The terrific if slightly dated documentary The Celluloid Closet from 1995 took a look at the way Hollywood depicted LGBTQ culture — going back before those assembled letters meant anything to anyone. The doc showed how for a long time characters being queer on film led to their suffering and disappointment. Now we seem to have reached a stage of glowing, anthemic tales of acceptance, and there’s so much of it that’s wonderful. Unfortunately, not all of Everybody’s Talking About Jamie is wonderful, but enough of it is to make it worthwhile.

Especially as its got Richard E Grant as an aging drag queen, Loco Chanele aka thrift shop owner Hugo Battersby. He’s the mentor of 16-year-old Jamie (Max Harwood), a student in Sheffield whose goal in life is to find his own drag persona. But first Jamie’s got to find a name, a style, and face up to his schoolmates, best friend Pritti (Lauren Patel), the local bully, Dean (Samuel Bottomley), and disapproving teacher, Miss Hedge (Sharon Horgan), not to mention his absent father (Ralph Ineson). Good thing he’s got his long-suffering mum (Sarah Lancashire) and her best friend (Shobna Gulati) in his corner. 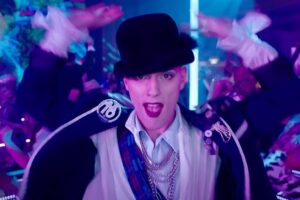 And that’s kind of the problem early on — there’s not enough obstacles to Jamie finding his best self. The first few songs are all celebratory tunes of manifest destiny: “Everything,” “Don’t Even Know It,” and “Wall In My Head” all announce Jamie as born this way, though none are close to being as awesome as “Born This Way.”

However, “This Was Me,” apparently written for the movie and sung by Holly Johnson of Frankie Goes To Hollywood, is a genuine slapper. Over an evocative montage, it helps tell Hugo’s story and those who came before, the ones who allowed Jamie to have his opportunity. It half makes you wish the movie was about them and it’s a moment of genuine grit that Jamie could use a lot more of.

What’s good is Jamie, the titular character, isn’t perfect. He’s willful and occasionally mean, and he makes mistakes. It’s actually one of the movie’s saving graces that he’s not always doing the right thing, and it keeps Everybody’s Talking About Jamie from feeling like a complete fairly tale. 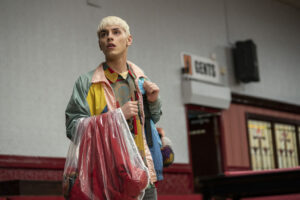 But maybe it being mostly a fairy tale isn’t the worst thing. Do movie musicals celebrating self-actualization while missing a lot of realism do any real damage, or are these part of the foundations of a more equitable society simply because they’re still a novelty? I just wished the songs were more memorable, and I wished they let us see Jamie’s progress as a performer — yes he’s talented and awesome, but there’s not much in the way of How To Become A Great Drag Queen about the proceedings. (The recent Stage Mother had more of that.) Where are the rehearsals, the inspiration, the sweat?

Anyway, if many of the reviews of a certain movie in cinemas at the moment are to be believed, it sounds like you could make a far worse choice right now with a high school musical. And besides, Harwood is winning, and there’s no arguing with the always delightful Grant in a frock.