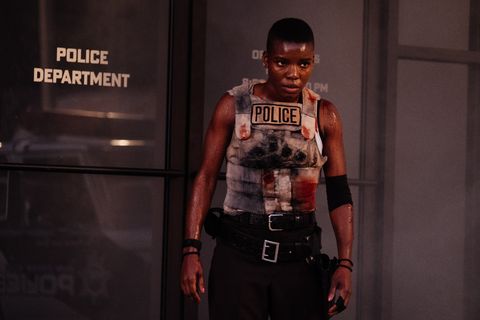 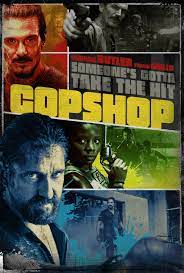 Action director Carnahan is on a bit of a roll given his last picture, time-loop thriller Boss Level, was quite a bit of fun. This time out he reteams with Frank Grillo for a picture that is in every beat the model of a ’80s or ’90s b-movie shoot-em-up, full of vivid, badass characters and more than a little humour in the script. Sure, there’s a lot of the can-be-tiresome machismo on display that’s a staple of Carnahan’s work, but it’s nicely leavened by the presence of one Officer Young right at the heart of this thing, played by the excellent Alexis Louder. 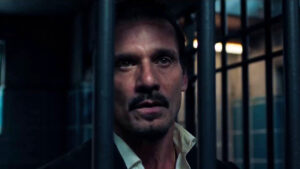 Teddy Murretto (Grillo), is a bad guy who helps other bad guys with their business. Naturally, he’s made some enemies, and when he steals a bunch of money and makes a deal to turn over evidence to the feds, his actions endanger the lives of the people he loves. It gets so bad he arranges to get arrested by the local cops in the Nevada desert community of Gun Creek. Locked up, he’s soon joined by a dude thrown in the drunk tank — Bob Viddick (Gerard Butler), a hitman who’s got Teddy in his sights. As the cops — some of whom aren’t nearly as clean as they should be — try to figure out why they’re having such a busy night, another killer, Anthony Lamb (Toby Huss), shows up, and he’s more like the Terminator than the two others.

The tension here is around who’s really the worst of these very bad men, and there’s a time to be had figuring it out. 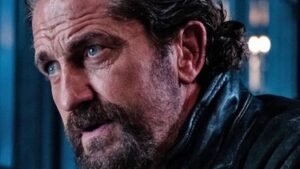 It’s a good thing Valerie Young is on the schedule. She’s a remarkable presence in the movie — smart and tough — and Louder is a stellar discovery. Gerry Butler is pretty great too, so comfortable in his cinematic skin now he knows exactly how much gas to give every moment. 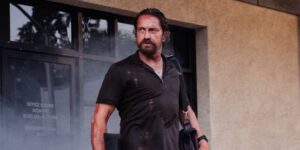 Maybe the biggest surprise is Grillo, who I gave some grief to in Boss Level for maybe not having the movie-star charisma to carry the whole movie. Here he shares the spotlight, but he does a whole lot more with many fewer close-ups, and the release-the-man-bun moment in the third act is worth the price of admission.

The MVP here is probably Carnahan’s DP, Juan Miguel Azpiroz, who lights and shoots the mostly single-location thriller with a lot more style than this material is asking for or deserves. Copshop ends up being better than most of your average action nonsense by knowing exactly what it is and delivering across the board.