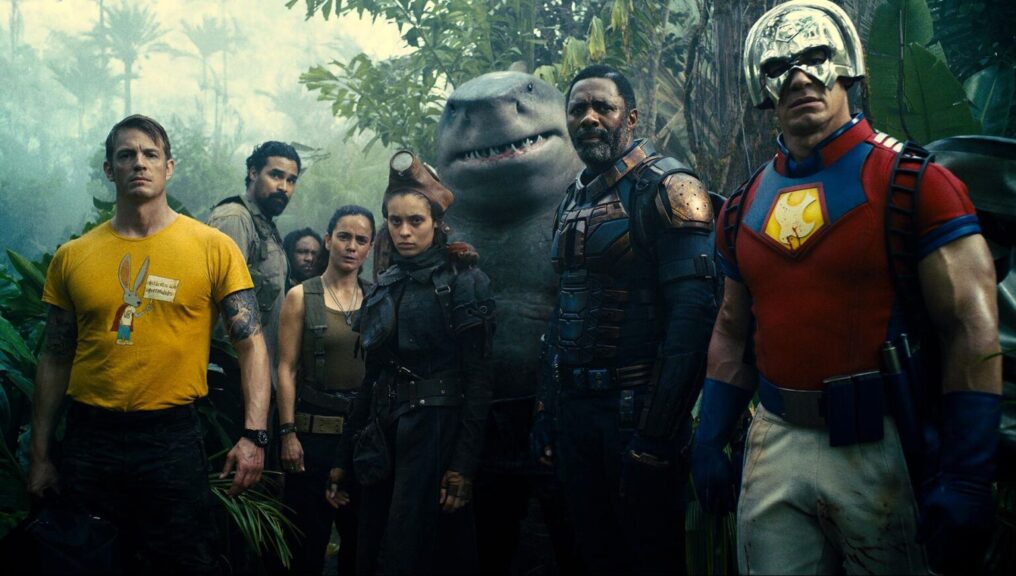 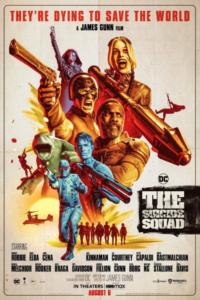 Though you might’ve scrubbed it from your memory, there was a previous Suicide Squad movie — the grim, messy, Toronto-shot effort from director David Ayer based on a DC comic about incarcerated super-villains sent on dangerous missions of national importance with the promise that if they survive their stretch in prison would be reduced. It arrived in 2016 to almost universally negative reviews — including mine.

Despite this, there’s been some buzz around this sequel/soft reboot from Guardians of the Galaxy filmmaker James Gunn. Advance word had it that he’d upped his anarchic sensibilities for a  more playful, though R-Rated, anti-superhero blockbuster, and the reviews are mostly positive.

Hard to believe, because it’s awful. 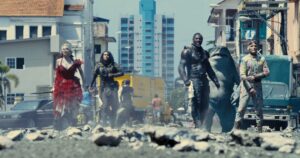 Ayers’ Suicide Squad was bad because it stank of compromise and studio interference. Gunn’s The Suicide Squad, arriving five years later, is bad because it’s cynical and stupid. It’s been a long time since a movie tested me, dared me to walk out of it, and I dearly wanted to with this one. I stuck around to legit have the opportunity to tell you to not do the same. The Suicide Squad revels in its nihilistic jokiness, but it’s loud, witless, and empty.

Right off the top we’re introduced to a group of silly, largely unthreatening baddies, including a couple who look familiar from the last time around — Jai Courtney as Boomerang, Margot Robbie as Harley Quinn, and Joel Kinnaman as Rick Flag. They’re sent to invade an island nation, Corto Maltese, for reasons. They walk right into a heavily armed response that kills a lot of ’em right on the beach. Not a big surprise here, given we’ve already established these guys are expendable, their strings pulled by the formidable Amanda Waller (Viola Davis).

But, hold up, we go back a few days, and find out there’s another incursionary force on the island, led by super-sniper Bloodsport (Idris Elba), and including the fascistic killer, Peacemaker (John Cena), rat-speaker Ratcatcher 2 (Daniela Melchior), the deeply insecure Polka Dot Man ( David Dastmalchian), and a land-shark, voiced by Sylvester Stallone.

If the idea of an ambulatory shark who mumbles like Rocky sounds like it can’t miss, don’t believe it. Every moment this rubbery escapee from a 1970s Saturday Night Live skit is onscreen is a laughter dead zone. 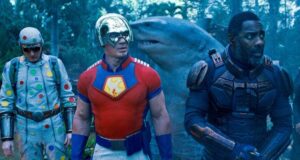 Yes, this is all goofy beyond belief and arguably doesn’t take itself too seriously, which is fine. If the script was as sharp as, say, Marvel’s R-Rated superhero satire, Deadpool, there might be a good reason to enjoy it, but The Suicide Squad isn’t funny at all.

The jokes, such as they are, are wildly juvenile, with Gunn going for maximum gross-out and gore as a way to underline the cartoonishness of it all. But, so what? Because the writing is so incredibly lame, we never grow to care about any of these characters or are invested in the thin backstory we get about them. We know how likely it is they’re probably all going to die anyway — why would we get attached?

Early on, our “heroes” enter an encampment of Corto Maltese soldiers, and kill everyone they can. Turns out these are insurgents, freedom fighters, and the fact so many are dead is played as an “oopsie” gag. Right there we know nothing really matters in this world.

This would be OK if the film had a single gag that lands. Seeing it in as close to a full cinema as you can find in these barely post-Covid days, I hardly heard a chuckle throughout the movie’s running time. For the most part, this is the antithesis of fun, and frankly a shock from the filmmaker who gave us two joyful fantasy movies in the Marvel Cinematic Universe. 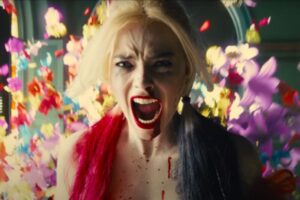 Margot Robbie’s had three movies to perfect Harley Quinn, and she’s done it: the character has become an icon. It’s a shame the movies around her have been so substandard.  This isn’t her movie the way Birds Of Prey was, but at least that picture had some terrific action sequences. This one is frenetically edited, with a few passable but unmemorable scenes of fighting and gushy bloodletting.

Even though it’s good to see her again, Harley doesn’t do much to forward the plot. Most of our time is spent with Elba, Cena, and Melchior, none of whom manifest. Elba just seems lost, resorting to saying “fuck” a lot. Dastmalchian’s Polka Dot Man is a promising character, but remains just barely sketched in.

Things take a bit of a turn in the last half hour. The arrival of Peter Capaldi as the Thinker — the villain who’s been working on a super-secret project in Corto Maltese that the squad have been ordered to destroy — he gets a few moments to virtually twirl a moustache. One of the characters sees their hated mother everywhere, which provides a couple surprising visuals. And the picture eventually finds a scale that has more in common with a Godzilla movie.

In that The Suicide Squad finally finds a gear that resembles fun. But, getting there is such an interminable slog there’s no way 20 minutes of good time at the end is worth the 110 of drudgery it takes to reach it. It’s telling that the film’s been a failure when the character you feel the most for is an enormous starfish-shaped cyclops alien. 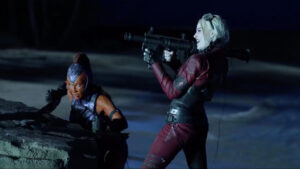 Maybe the worst part of all of this is the pivot Gunn inserts in that last act where he has two of the prominent allies turn against each other. We’re expected to buy that there’s suddenly an ethical dog in this fight, and that one of these assholes is actually going to stand for something. My eyes rolled out of my head at this point, given the shovelfuls of gore and meaningless killing we’ve had to eat thus far. Asking us to believe there’s a point to it is a bridge too far, and coming so late it just feels like hypocrisy. 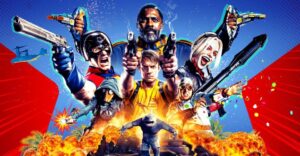 I don’t go to superhero movies to be especially challenged, but I also don’t expect to feel dumber coming out after the credits roll. The Suicide Squad may have reduced my IQ, but mostly it just frustrates for being so absent genuine entertainment value.